The creators talk their unconventionally-structured procedural 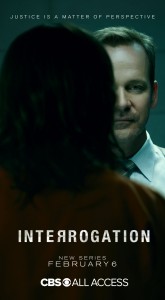 CBS All-Access’s new series INTERROGATION premieres all ten episodes of its first season on Thursday, February 6. Based on a real criminal investigation, INTERROGATION follows a Los Angeles-area murder case that stretches from 1983 to 2009. Kyle Gallner stars as the prime suspect, accused at age seventeen of killing his mother. In real life, cold case detectives look at files in whatever order they choose, not necessarily going in chronological order. INTERROGATION is structured so that, with the exception of the finale, viewers can watch episodes in any order, trying to piece the evidence together for themselves.

INTERROGATION is created by John Mankiewicz and Anders Weidemann in their first collaboration together. Mankiewicz, a four-time Emmy nominee for his work as an executive producer on HOUSE OF CARDS, has also worked as a writer/producer on BOSCH, MAGIC CITY, THE GLADES, THE MENTALIST, and HOUSE, among other projects. Weidemann is an award-winning writer and producer of television and films in his native Sweden; INTERROGATION is his first American series.

ASSIGNMENT X: So how did the two of you come together to create INTERROGATION?

ANDERS WEIDEMANN: It’s an old idea of mine, that I’ve had since I was in my twenties. And ever since streaming platforms started releasing whole seasons in one go, I thought, why do we have to watch them in a chronological way? And then John and I connected through [his] work on BOSCH, because what we realized was that when a cold case detective reopens a case, the first thing he or she does is to throw out the linear narrative. And they go through the case files in their own order, which is the same way as this show works, that every episode is one interrogation, and you can watch it in the order you choose. You become the cold case detective. So we were connected when we started doing research on what case we should pick for this new format.

AX: Did your work on BOSCH make you feel like you wanted to do this format, or had you thought of it at all before Anders Weidemann presented it to you?

JOHN MANKIEWICZ: No, I hadn’t thought of it, but my relationship with cops when I was working on BOSCH made me feel that this could work, that this was a great engine for doing an out-of-[chronological]-order show, because I knew that they did follow the evidence when they re-investigated a case, cold case detectives. They went [away from] the linear narrative, because it was wrong, it led to a wrongful conclusion. They get it right on BOSCH, I think, and we try to do the same thing, be true to what cops really do and how they really do it.

WEIDEMANN: This way, it’s actually a closer version of how a real cold case detective works. 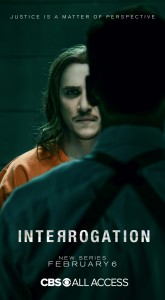 AX: Is the idea that INTERROGATION is going to be an anthology series going forward, with a different case and different detectives each season?

AX: The first season of INTERROGATION is based on or inspired by a real case, so how did you find the case? Did you look at a lot of cold cases with a list of elements that you needed in the one you selected?

WEIDEMANN: We had consultants that told us about different cases. And then there was one case that stood out. And we just fell down that rabbit hole when we started doing research on it, because it was such a fascinating case about this seventeen-year-old kid, who was accused and convicted of murdering his own mother, and then he spent twenty years fighting for his freedom.

AX: Did you talk to the real person at the center of the case that INTERROGATION is based on?

WEIDEMANN: We have not, no. We have done an extensive amount of research through case files, through interviews, through consultants – we had a prison consultant that we used – but we haven’t spoken to the actual person.

AX: Did you speak to anybody who’d been involved in this case, or did you just speak to your experts and ask, “Okay, if this happened, then what would you do?”

WEIDEMANN: Yeah, it would be the latter. We tried to root and ground it as much as possible in reality. Of course, we fictionalized some elements for dramatic purposes, but I think that when the viewer watches this, they will get a real, authentic feeling of the story. It feels like this is true detective work.

AX: What is your partnership like on INTERROGATION with each other?

WEIDEMANN: We’re co-show runners. We compliment each other pretty good. John is fantastic with character and dialogue, and I think I’m pretty good with structure.

MANKIEWICZ: It was a true partnership. 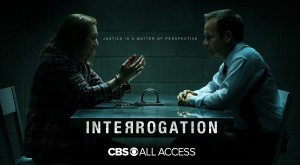 AX: How big was your writers’ room?

MANKIEWICZ: We had six or seven writers, including us.

AX: David Strathairn, who plays the prime suspect’s father, said he had worked for you previously on HOUSE. Had you been waiting since HOUSE to get a chance to cast him again?

AX: Since the episodes aren’t meant to be watched in a specific order, how did you structure them so that they fit together?

WEIDEMANN: Well, you have to structure every episode as a pilot, because any episode can be your first impression of the show. But then, I think, as long as we stuck to the truth as much as possible, we were safe. We couldn’t go wrong. If we started to construct things and make up things that weren’t true, then we could find a house of cards in that way.

AX: When we see various scenes, are we only seeing what actually happened, or are we seeing people’s versions of what they said happened?

WEIDEMANN: Yeah. It’s all about lies and conceptions of the truth, of course. And you can’t trust anyone in this show. So it’s a lot like life these days. Everybody has their own perspective of the truth, and whoever tells the best story wins. I think we have back-up for everything that happens in the show, but then, of course, we have extrapolated things from that core that we would find in the source material. What’s so fascinating for us, and hopefully for the viewer, is that, depending on which order you watch the episodes in, it’s going to color your perception. And since there are so many different ways to watch it in, every viewer will have a slightly different perception of the story.

AX: Did you sort of think, “What if RASHOMON was a police procedural,” or …?

WEIDEMANN: You can say that afterwards. It wasn’t a thing that we thought about when we did it, but it clearly seems like that’s not a bad analogy, it’s like a RASHOMON for the twenty-first century, or why God invented streaming TV [laughs].

AX: Most writers, even if they don’t know what the middle will be when they start, usually begin with, “Okay, I know this is what the end of it is, and I know this is how this starts.” They’re working with a linear storyline. How hard was it for both of you to put aside linear storytelling and do this other style for INTERROGATION?

WEIDEMANN: We didn’t put it aside. We actually worked quite linearly in the writers’ room. And then we sort of pulled episodes out, and made sure they were standing on their own feet, and focused on that afterwards.

MANKIEWICZ: Also, going through all this volume of information in the writers’ room, yes, we did do it linearly, but there was a lot of changing of opinions. People will say, “Yeah, we think he did it,” and then a week later, “Maybe not.” People who definitely thought he was innocent would go back and forth.

WEIDEMANN: That is of course the question that drives the series as well.

WEIDEMANN: If he didn’t do it, which is a big if, then who did? That’s the question the audience will ask themselves, the same way that we asked ourselves that question in the writers’ room.

WEIDEMANN: It’s the same job. I think the show runner system works better here than it does in Europe, which is still very much auteur-based and director-based.

AX: Did you have to learn anything about Southern California to do INTERROGATION?

WEIDEMANN: I’ve been running in front of the freight train, learning as much as I can, yes, about everything [laughs].

AX: Now, on the other hand, you’ve done BOSCH, which appears to have shot in every nook and cranny of Los Angeles. Did that experience come in handy for INTERROGATION?

MANKIEWICZ: Yeah, well, the San Fernando Valley is sort of a real character in the show, and the changing police force, which I knew from my work with the cops, the pre-Rodney King cops, the cop you see Russell [played by Peter Sarsgaard] is when he’s starting out in the first one, is a much different cop after DNA, and after the riots. He wasn’t wearing gloves at the crime scene. Or booties. The LAPD has really changed.

AX: A number of characters go all the way through those time periods. Was it a challenge for production to keep up with who looks like what when where in the episodes?

MANKIEWICZ: Well, Kyle goes from seventeen to forty-something, and yes, it was a big challenge, hair and the way people looked. Peter had to age, David had to age. And since we didn’t shoot it straight through, we had to make a lot of quick decisions along the way. But we had an incredible hair department, we had an incredible costume department. We’re so grateful we got the actors we got.

WEIDEMANN: Yeah, the cast is amazing, and the performances are spectacular.

AX: To the best of your knowledge, has anything like this been done? I mean, there’s the “Bandersnatch” episode of BLACK MIRROR on Netflix and SPLATTER had some of that, but those weren’t procedurals.

WEIDEMANN: And “Bandersnatch” is also a branching tree structure, which means that they would have to shoot eight hours if you want to watch two hours. This is what we call a multi-linear structure, where you get to see the episodes in the order you choose, but you can still watch all of the material that we’ve shot. I don’t think anybody’s done this before.

AX: If INTERROGATION is successful, do you think it will have a broader impact in terms of storytelling styles?

MANKIEWICZ: Memory is such an interesting area. Growing up, my sister and I lived in the same house. We have completely different versions in a lot of areas. She’s right, and I’m right. And our hope was to do a show that explored other people’s memories of one incident and see it from [different points of view]. One person could be right for them, the other person’s right for them, but because there’s all this pressure from a murder, what effect does agenda have on memory?

AX: Do you guys have any other projects we should know about, either together or separately?

WEIDEMANN: I have a show for HBO that I did before this that’s called BEAR TOWN. It will probably have a premiere this year as well.

AX: And what would you both most like people to know about INTERROGATION?

MANKIEWICZ: They need to watch it [laughs].

WEIDEMANN: It’s one cold case, ten episodes, ten interrogations. You get to choose which order you want to watch it in. You become the detective.

MANKIEWICZ: And the experience is different with different orders. You might be interested in watching another episode than I would. But we try to put enough information in each episode to give a few choices for the next.

WEIDEMANN: It’s full of Easter eggs. You can watch it three times, and you will see new things.