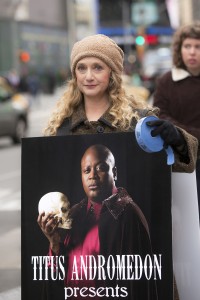 UNBREAKABLE KIMMY SCHMIDT is living up to its title. First, Netflix picked up the comedy, created by Tina Fey & Robert Carlock, after NBC passed on the pilot. The series, about cult survivor Kimmy Schmidt (Ellie Kemper) thriving in New York City, ran on Netflix for four seasons, 2015 through 2019. Now UNBREAKABLE KIMMY SCHMIDT is back with a new installment on Netflix, a choose-your-own-adventure interactive branching movie, UNBREAKABLE KIMMY SCHMIDT: KIMMY VS THE REVEREND. The telefilm sees Kimmy preparing to marry the kindly if daft Prince Frederick, while facing off against her erstwhile oppressor, Reverend Richard Wayne Gary Wayne (Jon Hamm).

Kane, originally from Ohio, earned an Oscar nomination for her lead role as a Russian Jewish immigrant to New York in 1975’s HESTER STREET. She won two Emmys for her work on TAXI as Simka, wife of Andy Kaufman’s character Latka. Among Kane’s many other credits are the influential horror film WHEN A STRANGER CALLS, the classic fantasy/comedy THE PRINCESS BRIDE, and a stint on the series GOTHAM as Gertrude Kapelput, mother of future Batman nemesis the Penguin (Robin Lord Taylor).

We can’t ask Kane for spoilers about UNBREAKABLE KIMMY SCHMIDT: KIMMY VS THE REVEREND, but here’s what she can tell us.

ASSIGNMENT X: Does doing UNBREAKABLE KIMMY SCHMIDT for Netflix feel any different than doing a broadcast network comedy? By the time the pilot was being shot, was it for Netflix, or was it originally shot for NBC?

CAROL KANE: No, no, it was all shot for NBC, and then towards the very end, we found out that we were making the switch. But I don’t feel that there is a big difference, except for, as Tina was saying, that we have more time [minutes in the episode], which helps to tell a more complete story. I think for the writers, it’s a relief, that they can tell a more complete story.

AX: On the eccentricity scale of the people you’ve played, how would you rate Lillian?

KANE: What do you mean, “eccentric”? [laughs at abashed expression on reporter’s face] I would say that some have been more, and some have been less. How’s that? 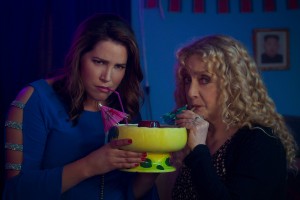 Sara Chase and Carol Kane in UNBREAKABLE KIMMY SCHMIDT VS. THE REVEREND | ©2020 Netflix

AX: So Lillian is sort of in the middle.

AX: Was Lillian written with you in mind?

KANE: I don’t know. It was nice was that they just asked me to do it, but I’m not quite sure if it was written for me, or just offered to me, but I love it.

AX: How do you view Lillian’s ongoing war against gentrification in its many forms?

KANE: One of the things that’s happening for me is that I’m feeling a very keen loss of the individuality of my neighborhood in New York, and really fighting to save what I love about it. I remember personally, when I started to notice it in New York that you could just get on a subway, and I could go from the Upper West Side down to Soho, and I would see the same stores when I got out of the subway down in Soho as I would on the Upper West Side. And that was kind of a horrifying revelation to me, because that is the great thing about New York, is that each neighborhood is so different. And we don’t want to be homogenized, and so yeah, I think for Lillian, that’s a big fight.

AX: For a while, Lillian had a relationship in UNBREAKABLE KIMMY SCHMIDT with real-life accused murderer Robert Durst, played on the series by Fred Armisen. How was working with him?

KANE: You know, he’s one of those inspirational, unique artists.

AX: Did you watch THE JINX, the documentary series about Robert Durst?

AX: What did you think of THE JINX?

KANE: Well, I thought it was just mesmerizing, and that Fred really got it [laughs].

AX: Your work on UNBREAKABLE KIMMY SCHMIDT the series overlapped somewhat with your work on GOTHAM. How did you enjoy doing that series? 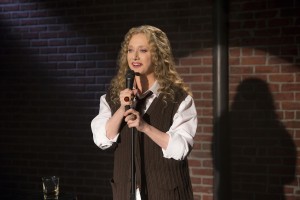 AX: I know Robin Lord Taylor was saying he was hoping you’d play his mother on GOTHAM, and then you were cast in the role …

KANE: I loved that so much. Yes, it was just a delight.

AX: And what would you most like people to know about UNBREAKABLE KIMMY SCHMIDT?

KANE: I just think that we’re so lucky to have these great writers. That’s the main thing. People have been waiting, which I think is really exciting. I’ll go buy something in a magazine stand, and people will be asking me, “When are you coming back?” People are waiting to see the next [iteration of the show], which is really nice. 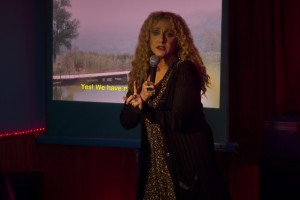 Carol Kane in UNBREAKABLE KIMMY SCHMIDT VS. THE REVEREND | ©2020 Netflix