The actors talk about the ABC drama series 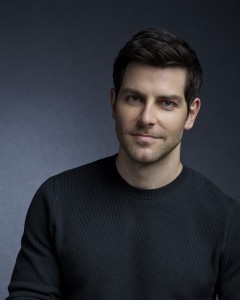 In ABC’s A MILLION LITTLE THINGS, now on Thursday nights in its second season, three lifelong best friends – played by David Giuntoli, Romany Malco and James Roday – re-evaluate everything in the wake of the suicide of their comrade Jonathan (Ron Livingston).

Giuntoli’s recovering alcoholic character Eddie Saville was having an affair with Jonathan’s wife Delilah (Stephanie Szostak), who has subsequently had Eddie’s child. Eddie has managed to save his marriage to business executive wife Katherine (Grace Park) and remain with their little boy Theo (Tristan Byon).

Roday’s Gary, meanwhile, has embarked on a very up-and-down relationship with fellow cancer patient, therapist Maggie Bloom, played by Allison Miller. Despite frequently breaking up with Gary, Maggie has been accepted as one of the gang by his friends.

Miller, born in Italy and raised in Kentucky and Florida, has previously had regular roles on KINGS, TERRA NOVA, SELFIE, and INCORPORATED. Giuntoli, originally from Wisconsin, starred as the monster-fighting title character in six seasons of GRIMM, as well as the recent feature film MOTHER’S LITTLE HELPERS.

Giuntoli and Miller don’t have a lot of one-on-one scenes together in A MILLION LITTLE THINGS, but they’re hanging out together at an NBC party and provide a two-on-one interview about their show.

ASSIGNMENT X: Not asking for spoilers, but what have been the high points of A MILLION LITTLE THINGS for you guys so far, in terms of stuff that you’ve enjoyed playing?

DAVID GIUNTOLI: There’s something that comes up, I’ve got to talk to Theo about what alcoholism is, and I explain it to him, because my sister is an alcoholic on the show, and it’s a wonderful moment, and it’s very real, and it was written beautifully, and that was one of my favorite moments of this season.

ALLISON MILLER: This season, my favorite moment is a scene I’m not actually in, but my absence is felt deeply. 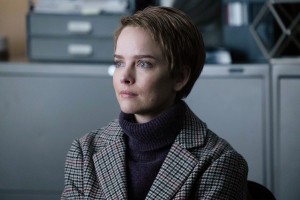 GIUNTOLI: As it always is, Allison.

AX: For scenes that you’re actually in …?

MILLER: That I like for me, that I’ve actually gotten to do on camera? They let me sing and play piano on a song this season, and that’s not something I get to do very often. And it was really exciting to see and get to do that.

GIUNTOLI: You have the voice of a eunuch. It is beautiful.

AX: Your characters don’t interact very much with each other on the show … 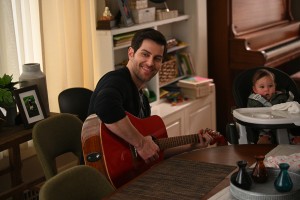 GIUNTOLI: This would be it right here [laughs].

MILLER: Usually, our characters are at parties together, so that makes sense.

AX: James Roday as Gary is your primary scene partner. How is he to work with?

AX: I believe you and your wife Bitsie Tulloch have had a child in real life since A MILLION LITTLE THINGS premiered in 2018?

GIUNTOLI: That is correct. A real child.

GIUNTOLI: Thank you so much. Little Viv. She’s the best, absolutely the best.

AX: Is this your first?

AX: Is this good preparation for dealing with Eddie’s baby on A MILLION LITTLE THINGS?

GIUNTOLI: Oh, yeah. That’s a cakewalk for me now. When one of our babies is upset, I’m like, “Guys, give her to me, and I’ll do this. I’ll figure this out.” I will say, having a child in real life has opened up my acting world and deepened my work, absolutely [laughs]. 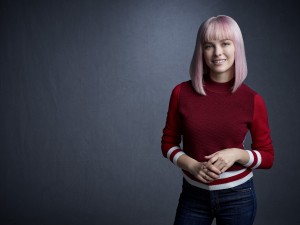 AX: Has being on the show and dealing with Maggie’s cancer storylines made you feel knowledgeable about cancer, or more concerned?

MILLER: I don’t feel hugely knowledgeable about it, but I do feel like I have a better understanding. Concerned? No, because I think that, if anything, this has shown me, from the people I’ve spoken to who have been through it, it can happen to anyone at any time, and there’s nothing you can do to control that, or prevent it. So the concern is always there, but you just can’t live with it all the time.

AX: Were you surprised or just gratified when A MILLION LITTLE THINGS was picked up for its second season?

MILLER: I was surprised, only because I’ve been working for fourteen years and never had one of those. But it made sense, seeing how well the show was received, and the gratification was immense, yes.

MILLER: I wrote, directed and starred in a short that is going in festivals right now. It’s called GROWTH. And other than that, I’m in the upcoming PSYCH movie [produced by and starring A MILLION LITTLE THINGS costar Roday] that is going to be on [NBC’s streaming network] the Peacock in April.

GIUNTOLI: I actually don’t have any other projects. This has taken up everything right now. Directing a movie over the hiatus. That’s it. And my wife is playing Lois Lane, which is really exciting, on The CW show [SUPERMAN AND LOIS], so we’ll be shooting in the same city [Vancouver], and it’s going to be wonderful.

AX: And what would you most like people to know about the rest of A MILLION LITTLE THINGS Season 2?

MILLER: It’s going to be full of beautiful moments and a lot of gut punches, so buckle up.

GIUNTOLI: The finale turns everything on its head. We’re probably going to say goodbye to a beloved character.

GIUNTOLI: Hey, everything’s on the table on our show. But you’ll appreciate this tease once it happens.

This interview was conducted during ABC’s party for the Winter 2020 Television Critics Association press tour.

Related: Interview with A MILLION LITTLE THINGS and GRIMM star David Giuntoli on Season 1 of his new ABC series