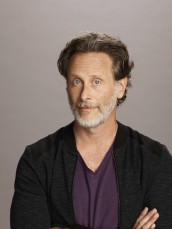 The actor pairs up with Fran Drescher in the new series 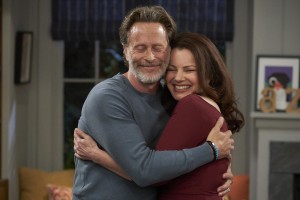 In NBC’s new Thursday-night comedy INDEBTED, Fran Drescher and Steven Weber play, respectively, Linda and Stew, a long-happily-married couple who have recently gone broke. Always loving parents, they decide (without consulting him) to move in with their grown son Dave (Adam Pally), his wife Rebecca (Abby Elliott) and their offspring.

Weber, originally from Queens, New York, has done a lot of comedy. He starred for eight seasons on the half-hour WINGS as eccentric small airline owner Brian Michael Hackett. Weber,  also had his own comedy series, THE WEBER SHOW, played the title role in the feature film version of the dramedy JEFFREY, and recently had recurring roles on BALLERS, MOM, and HOUSE OF LIES.

However, Weber has also done a great deal of drama and horror, including SINGLE WHITE FEMALE, the TV miniseries version of THE SHINING, NIGHTMARES AND DREAMSCAPES, TALES FROM THE CRYPT, MASTERS OF HORROR, DESPERATION, HAPPY TOWN, CRAWLSPACE, HELIX. iZOMBIE and CHANNEL ZERO. Last year, Weber played the primary villain, a sadistic coercive rapist, in the Netflix film THE PERFECTION. The experience, Weber says, made him actively want to do another comedy.

Speaking on a Q&A panel with his INDEBTED cast mates and producers, Weber relates, “I’ve done everything else. I mean, I have been playing such reprehensible guys for such a long time, and enjoying it, because I grew up loving the whole idea of a character actor and villains. I was just watching a Peter Lorre movie last night, and digging that, but after a while, I even asked my shrink, ‘Why am I always playing these awful guys?’ And she said, ‘Well, better to play them than to be them.” I thought, ‘Okay. That’s good.’ And then the universe handed me this great opportunity to play somebody who is so laid-back and loving and positive. It is becoming a little conspicuous that every role I was playing was kind of darker and darker and darker until I hit the ceiling. I did a terrifying and provocative Netflix movie last year, THE PERFECTION, with Allison Williams. And this guy was the most heinous creature on Earth, and fun to play, but it’s a real relief to play somebody who is so loving. And in this world, it’s such a great and now rare kind of environment to be in to do four-camera [comedy]. I find that for something that’s become rare, it’s so beloved by a large number of people.” 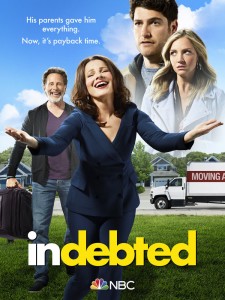 Asked about how his style of comedy works with Drescher’s, Weber jokes, “Fran has shut me down, what I like to do comically.”

Drescher seems a little concerned. “They’re going to believe you.”

“No, they’re not,” Weber assures her.

This gets a laugh.

“First of all,” Weber says, “thank you for thinking that I have a style of comedy.”

“Thanks,” Weber continues. “My style of comedy is, show up if somebody says, “Will you do this?’”

“Fran, I’m talking,” Weber pretend-scolds her, then more seriously addresses the original question. “Basically, we’ve known each other for a long time, and I suppose it would be fair to say that everybody on this panel has a style, but it all seems to meld and interlace in a way. First of all, Fran poses no challenge. It’s a benefit. She makes it easy. And in these roles, which are so positive in spite of the economic flaw that brings them to live with their kids, they are loving and positive, and they are crazy in love with each other. They have crazy animal sex, and you know what? It’s such a fun thing to play with Fran, because it’s so positive and there really is no challenge.” 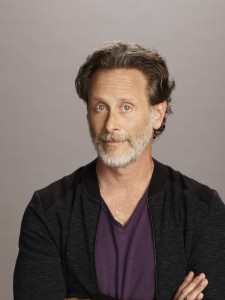 ASSIGNMENT X: When you got INDEBTED, how actively were looking to do comedy?  Was this something you sought out, or is this just what came through the pipeline?

STEVEN WEBER: It mostly came through the pipeline, but in a way, I kind of made a psychic decision to do something that’s positive, that it would be great to return to something like this. Because not only is it a good show, but the schedule is great. It’s the most desirable gig for a TV actor. But I wasn’t consciously looking for it. I wanted a four-camera show, but it just kind of came my way.

AX: With all of the things you’ve done on TV, film and in the theater, what are you recognized for the most?

WEBER: I guess WINGS was the widest. But I did an amount of theater, and I want to see if I can go back to that, explore that in my twilight years [laughs].

AX: When you’re doing a part like Stew in INDEBTED, is it easier to embrace the totality of the character, whereas when you’re doing something like THE PERFECTION, do you have to go, “All right, I’m going to concentrate on being dominant in this scene without really thinking of what else this character has done that’s off-screen”?

WEBER: You answered the question that you just asked. Yeah [laughs]. It’s much easier to embrace this character, and in many ways, it’s more simply drawn, it’s more enjoyably drawn. I can take it from my life. This is very much like my family, or elements of my family. Playing a psychotic, sadistic head of a music school, there’s really not a lot for me to draw on, so you have to go places – I’m not Brando or anything, but eventually, after you’re doing it for weeks and weeks, it’s depressing. It’s like wearing shoes that are painful. It’s not a happy time. But again, grateful. It’s great to be working.

AX: You did a number of horror pieces with Mick Garris, including starring in the Stephen King TV adaptations of THE SHINING and DESPERATION, where he directed you, and the “Jenifer” episode of MASTERS OF HORROR, which he produced and you starred in and wrote. Do you have any thoughts on your work with him?

WEBER: Mick’s kind of an unsung hero, not just in the horror field, but as a director. He’s a real visionary. To be able to take so much of Stephen King’s work, and also to focus on his own writing, his own creativity, it’s kind of amazing. He’s great.

WEBER: Right now, no. because I wrapped up all these shows that I was doing. I do a lot of audio books, I do a lot of audio work. I’m doing another Harlan Coben book, I’ve done about seven of his books. I did Stephen King’s THE SHINING book, which has been an award-winning thing. So that’s basically all. I’m just waiting to see what happens with this. And then I’m a journeyman actor, so whatever comes down the road.

AX: And what would you most like people to know about INDEBTED?

WEBER: That it’s actually legitimately funny. It’s so funny. We were talking about the nuances and whatever ethnic flavor there might be. It’s been so surprising and affirming that audiences, who may not necessarily be let’s say Jewish, are moved. So it’s actually very accessible and nuanced and fun.