She talks her work with the Hallmark Channel

Rachel Boston has a very successful relationship with the Hallmark Channel. As an actress, she’s starred in seven Hallmark telefilms; as a producer, she’s made three for them. Her newest Hallmark film, CHECK INN FOR CHRISTMAS, was shot in August. It airs Friday, December 6, and thereafter throughout the month.

Boston, originally from Tennessee, has also starred in two seasons of WITCHES OF EAST END. Her other credits include IN PLAIN SIGHT, THE EX LIST, GHOSTS OF GIRLFRIENDS PAST, (500) DAYS OF SUMMER, and AMERICAN DREAMS. Additionally, Boston is currently producing a documentary. She talks about all of this and more.

ASSIGNMENT X: What are you doing for Hallmark now?

RACHEL BOSTON: I just had a film, THE LAST BRIDESMAID, that came out [earlier in 2019], that I was an executive producer on and starred in. We just pitched our sequel, so we’re hoping to them the sequel very soon, and then I’m about to start a Christmas movie.

AX: Is the sequel THE LAST BRIDE?

AX: Who’s your leading man in that?

BOSTON: Paul Campbell, who is an extraordinary actor, such a kind human being, and he’s funny. He just has this comedic sense – he kept me laughing the entire shoot, which set a great tone for a romantic comedy.

AX: How many films have you produced at this point for Hallmark?

BOSTON: I’ve produced three, and I’ve been in seven. I produced one that I am not in that we did for a wedding movie, called THE WEDDING DANCE [aka LOVE AT FIRST DANCE], that starred Niall Matter and Becca Tobin. So I did one where I was completely behind the camera, and then these last two. 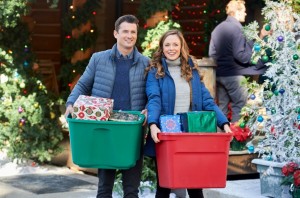 BOSTON: As far as selling a script, it can take some time to find its place. It’ll go into development – maybe it’s a summer movie, maybe it’s a fall movie, depending on what project you are bringing to them. But once it gets into development, and once it’s green-lit, that process moves very fast. We start prep, we know the shoot schedule, we’ve got a post schedule, and then it airs. So that’s very dialed-in. The timing is always amazing to me, because you’ll pitch something, and then it will come together so beautifully, with a cast that is just a dream that wouldn’t have been available if it was at a different time. So that’s always amazing, how that always works out.

BOSTON: Very much so. We’ve done so many of these now that it is [very organized], and you’re often working with producers – which is one of my favorite things – that you really trust, and you really care about, and you know they have your back, and you have theirs. And so you’re going into a creative environment that has that safety, and that’s one of the beautiful things that I think Hallmark provides. It’s like the old studio system, where you are working with similar directors and actors, and it makes it really fun to be able to tell these stories that are so light and happy, and to just be in an environment that’s really [supportive].

AX: When you’re executive-producing a Hallmark film, do you have particular areas that you’re in charge of, within that project?

BOSTON: I love development of story. I’m working with Nina Weinman. On this last movie, she wrote a beautiful script. I am involved with every outline, and with the concept, and then once we get to filming, on these films, I’m often in every scene. So if I’m in the movie, I very much take a step back [laughs]. I’m there for everything, so I’m paying attention, but I’m very focused on telling the story. And then I really enjoy watching the cuts. Music can change so much, and Hallmark clearly has mastered the art of the romantic comedy, so there are so many wonderful people you’re working with who do have that down.

AX: Are you looking at producing for other outlets besides Hallmark?

BOSTON: I am. I love working with this family, and Hallmark has been such a great place, and I would like to continue my work here definitely. But other stories – I have a documentary that I’m actually working on right now that’s about my childhood, where I grew up. One of my best friends, her mother has such a beautiful story of overcoming domestic violence. So that’s a project that is not in the romantic comedy world. It’s women coming together. So that’s something that I’m really passionate about, is women supporting each other through trauma, and the different routes of healing, whether it be faith, whether it be through therapy, whether it be EMDR, which is a powerful tool to clear the mind. EMDR. They use it with a lot of veterans, but it helps reprogram trauma memories. So that is something that, on the side, I am really interested in getting women – and men as well, but this documentary focuses on females that are in this group and how they healed.

AX: So the documentary may be more for a channel like Discovery?

BOSTON: That’s what I’m hoping for, a Discovery or Netflix, even. I want to bring awareness to all the research that I’ve been doing, and how many women that I have seen go through this, just really bringing a consciousness of what people can do, and how powerful your life can become working through that.

Related: Exclusive Interview with director Eric Close and producer Dustin Rikert on CHRISTMAS AT GRACELAND: HOME FOR THE HOLIDAYS