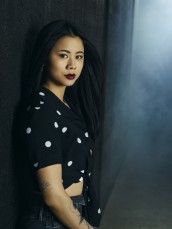 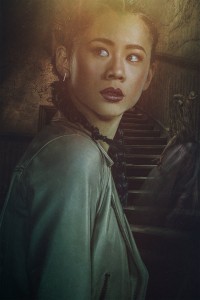 In the new series version of NANCY DREW, Wednesday nights on The CW, Kennedy McMann plays the title character. When Nancy is not busy sleuthing – and sometimes even when she is – she works as a waitress at the Claw Restaurant in the little scenic town of Horseshoe Bay. Nancy’s boss at the restaurant is a former classmate, the dictatorial George Fan, who is played by Leah Lewis.

Lewis’s other recent credits include SING IT!, GUIDANCE, THE GIFTED, STATION 19, and The CW’s CHARMED reboot. “George is not Nancy’s friend, actually. Plot twist. [George] is this really tough girl that doesn’t run on Nancy’s wave. I feel like what George believes is much more put-together. George is not lost, but she definitely doesn’t do things as sensibly as Nancy, and she’s tough as nails. But as you see her work with Nancy, her barrier starts to break down a little bit, even though that’s not what George wants. And yeah, George didn’t really like Nancy that much in high school, but we’ll see how that pans out.”

When Lewis makes some time to talk with us, her cast mate Tunji Kasim, who plays Ned Nickerson, contributes a few observations.

ASSIGNMENT X: Are you sort of doing an accent as George? Her voice doesn’t seem to be your normal speaking voice …

AX: There’s a murder mystery and a ghost story running through the first season of NANCY DREW. Do you have your own opinion on whodunit, or do you know whodunit from reading advance scripts?

LEWIS: They actually haven’t told us who exactly did it. And also, I kind of wish it was no one, because I feel like want everyone to succeed [laughs] and not be the killer. I don’t want it to be us.

AX: Did you have to study anything to play George, like how to run a restaurant, how to yell at people …?

LEWIS: For George, there’s no skill that she has that I would have to have studied for, other than the fact that, I just have to train my mind, when I’m George, to think negatively all the time, and I’m not necessarily negative [laughs]. So for George, it’s just keeping myself in that “I’m a victim, and I’m negative, and I hate Nancy” mindset, which is actually kind of hard, because I really like Kennedy a lot.

KASIM: Have you been a waitress before?

LEWIS: Actually, yeah, I have done restaurant work before.

LEWIS: I just had to draw on old life experiences.

AX: So do you feel like now, “All I wanted was to get away from the restaurant and be an actress, and now …”?

AX: Now, you’ve worked for The CW before, on CHARMED …

LEWIS: Yeah, this is my second time being housed by CW, and what I like about it is, how inclusive they are, and how they really push that, and they really treat their actors like that, too, and encourage their actors to treat other people that way. It’s a really special network, I think.

AX: Do you remember your first paid acting gig and how you felt?

LEWIS: The first paid acting gig, I did this pilot for Disney, and it was called MADISON HIGH, and I was on top of the moon. I played the Gabriella character. It was a spinoff of HIGH SCHOOL MUSICAL, and I just love set. I love working. There’s nothing better than getting to do what you love, and there’s something about being on set that’s just super-magical. I feel like nothing can go wrong [laughs]. 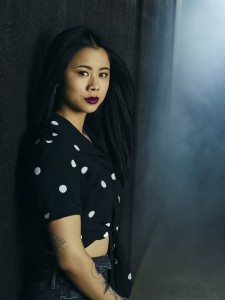 LEWIS: I do, actually. I have a Netflix movie coming out next summer called THE HALF OF IT, and it’s about this young Asian-American girl, living in a really small town, who falls in love with this girl as she’s writing letters to her for another guy. So it’s pretty cool. I’m really excited for that, too. CYRANO DE BERGERAC meets NO EXIT meets TO ALL THE BOYS.

AX: And what would you most like people to know about NANCY DREW the show?