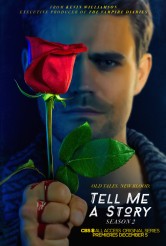 The actor talks his reunion with series creator Kevin Williamson 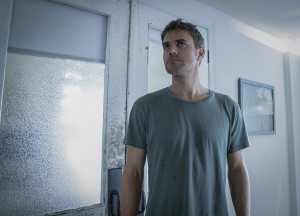 TELL ME A STORY premieres its second season on CBS All-Access on Thursday, December 5. Created by Kevin Williamson, TELL ME A STORY uses classic fairytales as a basis for several intertwined contemporary thriller plots set in the big city. Like FX’s AMERICAN HORROR STORY, TELL ME A STORY spins an all-new yarn each season, with some actors playing different roles from one year to the next.

PAUL WESLEY: Yeah, kind of, actually. Last season, I played Eddie, who was on the surface a completely screw-up, and it was very obvious the minute you met him. Whereas I think this year, this guy is super-polished, he’s got a great fiancée, his fiancée is beautiful, everything’s lovely, he’s a novelist. But then deep down inside, he has a secret. So it’s the opposite.

AX: Obviously, I hope that everybody you work with is a gifted writer and a good producer, but can you say what’s distinctive about Kevin Williamson, apart from his skills as a storyteller?

WESLEY: Well, it’s hyper-real. What I love about Kevin’s work, from SCREAM to VAMPIRE DIARIES is, everything is kind of rooted in the real world, but it’s surreal, almost, in a way. So for me, this role and this story, TELL ME A STORY is, it’s like the real world, you’re watching the real world, but it’s very distinguishable. You know you’re watching Kevin Williamson, because it’s a little bit heightened, and there’s something kind of unique about the way that Kevin writes, whereas he’s consistently winking to the audience. I think that that’s a really specific thing.

AX: You spent a lot of time working in Georgia on THE VAMPIRE DIARIES. TELL ME A STORY shoots in Nashville, Tennessee. How is working there?

WESLEY: Very similar, believe it or not. It’s spread out, it’s a nice town, it’s very similar to Atlanta, in my opinion. As someone who lives in both New York and L.A., I don’t have a ton of experience in the South prior to living in Atlanta, and Nashville and Atlanta are both burgeoning cosmopolitan cities.

AX: Would you ever want to play an essentially good guy again? Stefan had his dark moments, but he was mostly heroic …

WESLEY: I want to play whatever great roles challenge me. Obviously, right now, I’m focused on doing things that are opposite from what I’d done on THE VAMPIRE DIARIES, but the thing for me – I don’t care about genre, I don’t care about whether he’s a good guy or a bad guy, I just care about good writing, and great characters, and you just have to be strategic in how you pick roles.

WESLEY: Right after this, I’m attached to two projects right now that I’m very excited about, and they’re both with the same producer that did TELL ME A STORY. So we’ll see if they take off.

AX: And what would you most like people to know about Season 2 of TELL ME A STORY?

WESLEY: I just want people to watch and give it a shot.