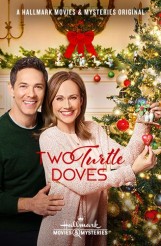 The scoop on the new Christmas telefilm 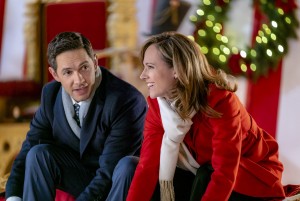 Deloach, originally from Georgia, has feature credits that include LOVE & OTHER DRUGS, THE HOUSE BUNNY, and LONGSHOT. She has also been a series regular on NORTH SHORE, WINDFALL, and AWKWARD. For the past few years, Deloach has worked steadily in Hallmark productions.

At a party that the network’s parent company, Crown Media, is holding for the Summer 2019 Television Critic Association (TCA) press tour, Deloach is chatting with Michelle Vicary. Vicary [rhymes with hickory] executive v.p. of programming and network publicity for Crown Media Family Networks, including strategic oversight of all production for Hallmark Channel and Hallmark Movies & Mysteries. The two women take some time to talk about their work.

ASSIGNMENT X: Can you talk about your Hallmark projects?

NIKKI DELOACH: I recently did LOVE TAKES FLIGHT, which is a Hallmark Hall of Fame that aired [earlier in 2019]. I did recently LOVE TO THE RESCUE, and my Christmas movie, TWO TURTLE DOVES

AX: How did you become part of the Hallmark acting family? They seem to have kind of an in-house repertory cast for their films.

DELOACH: This lady, actually, Michelle Vicary. She makes all the choices. She’s the executive vice-president. She decides.

MICHELLE VICARY: It’s one of the easiest decisions I’ve ever made. Nikki’s a delight. 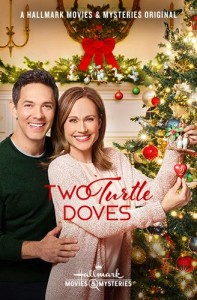 AX: Can you weigh in on what makes someone a Hallmark repertory-quality person?

VICARY: You know what I think it is, is that people are looking to feel good, and feel positivity, and I think, the people that [work with Hallmark], you’re going to find that common theme. And when we work with people, and we treat them really well.

DELOACH: It’s the best I’ve ever been treated in my career.

VICARY: They give back in so many ways. It’s a great job, to make television, to write about television, and I think it really is easier than it looks.

DELOACH: With you guys. That’s not always the case. I’m being very honest – they’re the best I’ve ever worked with.

VICARY: I want to be her.

AX: So Hallmark actors are attractive and approachable?

AX: So your next movie coming up for Hallmark is a Christmas movie?

DELOACH: By the way, Hallmark has like a hundred and forty million movies that they make in a year.

DELOACH: Michael Rady, who is the best.

VICARY: You two have the best chemistry. They are so much fun together, such great friends, and it really is so much fun to watch them together. It’s their second movie together [following LOVE TO THE RESCUE earlier this year].

DELOACH: Yeah. I could work with him forever.

AX: Are you playing the same characters?

AX: What is your character Sharon like in TWO TURTLE DOVES?

DELOACH: I play a researcher and a scientist who specializes in grief, which was incredible to be able to play, kind of a Brene Brown type. The script was written by Sarah Montana, who also wrote LOVE TO THE RESCUE. She’s one of their new writers who is absolutely wonderful. TWO TURTLE DOVES is a beautiful story about two people that kind of deal with their grief together, and then they fall in love at the same time. And it’s really real, and it’s really authentic and special.

AX: Did you do any research for the character?

AX: What kind of research did you do?

DELOACH: Well, actually, that’s something that I’ve studied for a very long time.

DELOACH: Well, trauma, what it does to the brain, what it does to the body. My youngest son has had three heart surgeries, and he’s twenty-two months old. So when we started all of this, and I was pregnant, it was something that I really wanted to learn about, because I knew that it was going to be very traumatic, and I didn’t want it to paralyze my life, I wanted it to inspire me and grow me and open me up even more.

AX: How is your son doing?

AX: Has your research helped you and him cope with the physical aspects of all this?

AX: Very happy to hear that. Do you know what you’re doing next with Hallmark?

DELOACH: Well, actually, since I just did my Christmas one, I’ve done that for the year, I don’t know what’s next, actually. There are a couple of scripts that I’ve read that I really love, so we’ll see.

Related: Exclusive Interview with director Eric Close and producer Dustin Rikert on CHRISTMAS AT GRACELAND: HOME FOR THE HOLIDAYS