The actor talks about the new ten-episode FX series 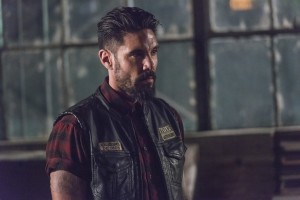 MAYANS M.C., premiering its ten-episode first season tonight on FX Networks, is a spinoff of SONS OF ANARCHY. Created by SONS architect Kurt Sutter and Elgin James, MAYANS M.C. is set approximately four years after the finale of the earlier series. The Mayans motorcycle club was originally introduced in SONS. Much like SAMCRO, the men of the Mayans M.C. love their bikes, but also deal in drugs and gun-running. Unlike SAMCRO, the Mayans are a Latin-American crew, based in East Los Angeles.

Clayton Cardenas plays Angel Reyes, a Mayans member, whose younger brother Ezekiel, aka EZ (JD Pardo) is seeking to join the group. Angel has a contentious relationship with their father Felipe, portrayed by Edward James Olmos, at the same time that the Mayans may be getting drawn into battles on a number of fronts.

Cardenas, who is also a producer, came into the TV/film business relatively recently. He has had roles in AMERICAN CRIME, SNOWFALL, S.W.A.T., and OUT OF THE BOX; he produced the latter.

ASSIGNMENT X: Were you a fans of SONS OF ANARCHY before you got involved with MAYANS M.C.?

CLAYTON CARDENAS: I was a huge fan. I was always a fan of Charlie [Hunnam, who played Jax Teller] and Kim Coates [who played Tig Trager], those are two of my favorite actors, and God, how do you not love Katey Sagal [who played Gemma]? So I was such a fan of hers even before, from MARRIED WITH CHILDREN, I was such a fan then, so to see her on that was awesome. But I was always attracted to the whole motorcycle vibe, and the outlaw world. That’s where I come from. That is my background. I grew up around gangs, I grew up in gangs, the whole drug past. I understand the world.

AX: How does your old gang feel about you becoming an actor?

CARDENAS: They don’t even believe it. It’s so funny, because I’ll get calls and texts. They think I’m this big movie star, just because I’m on a TV show. They’ve been coolly receptive to it, but they’re still in disbelief. I think what their [concept] of an actor is, is way different than what it really is, so I think it’s still a slow burn for them. 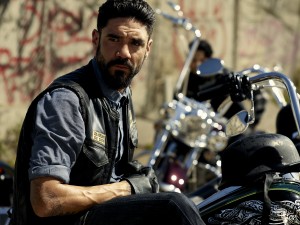 AX: Are they okay with you being out of the gang?

CARDENAS: Yeah. For me, it’s been about ten years since I was running around with them. So I got their blessing, so everything’s good.

CARDENAS: When I first got this, I was just happy to be a part of this writing. Whatever Kurt Sutter is writing, I want to be a part of. He comes from such a real, organic, intense place. And just to be in that writing, it’s so easy – because for an actor, you don’t feel like you’re acting. When you have words like this, you just feel like you’re fluidly living, which is such a gift for an actor to have.

AX: Edward James Olmos plays your character’s father in MAYANS M.C. Have you ever gotten to work with him before?

CARDENAS: First time. First time working with him. Every moment I can, I sit down and soak up any information he can give me. When he’s talking to me and JD, we look like two little kids around a campfire, listening to everything he says. So it’s amazing.

AX: Does your character Angel look up to and respect his father, or does he think that his father doesn’t understand the realities of the situation?

CARDENAS: I think there’s a little bit of both. I think deep down Angel wants the approval of his father, he wants to have his father tell him, “Son, you’re doing well.” But at the same time, he feels this deceit, because in Angel’s eyes, his father has always favored EZ. So there’s that, “I want to prove to you that I’m as good as him, but at the same time, I really don’t give a F what you think.”

AX: So Angel is ambivalent …

CARDENAS: Very much so.

AX: How would you describe the relationship between Angel and his younger brother EZ?

The Reyes brothers, they kind of balance each other out. You see that in families with siblings, right? One is better at one thing, one is the other. So it’s like we complete each other in a sense. At the same time, I think I’m impressed with his intelligence, his wit, just the way he has this sense of urgency to want to be better. I think Angel wants to be just like that as well, so [there is] this beautiful going back and forth with each other.

AX: The audience learns a big secret about EZ in the opening episode. I don’t know if this will even happen in the first season, but how do you think Angel is going to react to finding out about EZ’s secret?

AX: Where are you shooting MAYANS M.C.?

CARDENAS: We’re shooting all over. We shot a little bit in Mexico, we’ve shot in Santa Clarita, Palmdale, Lancaster, and also East L.A.

AX: At least in the opening episode, almost everyone is casually going back and forth between Spanish and English as they talk. Is that in the script, which lines are in which language, or do they leave it to you to determine which language you’re speaking on which lines, or even parts of lines?

CARDENAS: Well, we have a majority of Latino writers [on the writing staff], so there are certain things on the day where we, the actors who really do come from this world, probably turn the Spanish into more slang. But that’s the great thing I love about these scripts, is that, very much like our culture, we go in and out of Spanish and English, and we do this kind of Spanglish thing, which is so cool to see it on TV like this, in this world.

AX: Did you have to learn how to do anything in order to play Angel, like how to handle a gun?

CARDENAS: One thing I did have to learn was, I had to learn how to ride a Harley. I had grown up on dirt bikes and ATVs, and the Harleys are a whole different animal. These are eleven hundred pounds, and you have to learn to balance it. So that was the one thing I had to learn. The gun training and stuff, I kind of already had that down, but the motorcycle was the most vital thing. We don’t want our stunt doubles to be riding our bikes all the time.

AX: Angel is involved in a huge gun fight in a cemetery. How was that to film?

CARDENAS: There were a lot of problems for me that day. I thought some of the gravestones were fake, because there were these hollowed-out ones that were really easy to move. So on the day, I’m checking to see which ones are real, so I’m giving them a couple of them a little kick, which is not the right thing to do, because minutes earlier, [Pardo] told me not to do it. So during the scene, as you probably saw, I’m going to heroically save my brother, because I see he’s down and out. So I’m running across, and I tripped over a headstone, and I got fifteen stitches in my knee. So I am the only one on MAYANS that seemed to shed blood for the club so far.

CARDENAS: Not right now. I’m fully committed to MAYANS right now. I’ve been approached, but it’s just hard for me as an artist to go in and out. I want to give this my everything right now. Once we wrap, I’ll start focusing on other things.

AX: And what would you most like people to know about MAYANS M.C. right now?