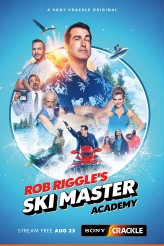 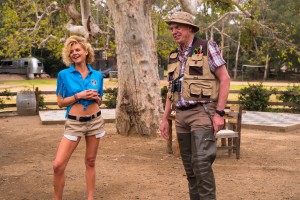 In ROB RIGGLE’S SKI MASTER ACADEMY, a comedy series now streaming all eight episodes of its first season on the free service Crackle.com, Riggle plays a version of himself who purchases the title establishment during a midlife crisis. Alas, the Ski Master Academy is the site of many fatal accidents, so Riggle tries to defend himself against claims of mismanagement. As flashbacks demonstrate, he may be more culpable than he’d like to admit.

Christopher McDonald is among the guest stars on ROB RIGGLE’S SKI ACADEMY. McDonald has a career that spans film, TV, and stage. His recent credits include an arc on BALLERS as the owner of the Dallas Cowboys, and playing Henry Karnes in the miniseries TEXAS RISING.

At a party thrown by Crackle for the summer 2018 Television Critics Association (TCA) press tour, McDonald talks about what he’s doing on ROB RIGGLE’S SKI MASTER ACADEMY, about reuniting with playwright Mark Medoff, and more.

ASSIGNMENT X: What can you tell us about ROB RIGGLE’S SKI MASTER ACADEMY?

CHRISTOPHER McDONALD: ROB RIGGLE’S SKI MASTER ACADEMY is about the madness and mayhem of a guy who’s out of his mind, who basically wants to show the world that jet skiing is an art form that is being blown up by these people. I’m a guest star only. I play Jim Bassman, who is a professional fisherman, he’s from the South, and I work mostly with Eliza Coupe, who’s fantastic. We just make each other laugh, and I worked with her before on her series, which was HAPPY ENDINGS. I played her father. This time, I’m playing the crazy Bassman. So basically, it’s carte blanche. They let you go out there, and ad lib, and basically, the direction is, “Bigger! Bigger!” So we were big, and we had a good time doing it.

AX: Do you have to get on jet skis at any point?

McDONALD: Negative. I am a guy who’s a landlubber. I would have liked to have gone on the skis, because, gosh, that looks like fun. But no, I did not, sadly.

AX: I remember, a long time ago, you expressed some concerns about something that was more a practical special effect than a stunt. You were in FLUBBER in 1997 with Robin Williams, and there was an apparatus that caused one side of your pants to blow up. You had said that you were worried during the take that the explosion might go inward towards you, rather than outward from the pants …

AX: Did you have to do anything at all hazardous on ROB RIGGLE’S SKI MASTER ACADEMY?

McDONALD: I had to handle a loaded crossbow.

AX: Did you have to fire it?

McDONALD: No. It did not fire. But it was loaded. [laughs] They would never let you have a real crossbow. But to me, being the real actor that I am, I thought it was real [laughs]. So I thought that was pretty dangerous.

AX: Did you do this show because the script appealed to you, or were you friends with Rob Riggle, or both?

McDONALD: I wish I could say I was friends with Rob Riggle, but it’s sort of that mutual respect club. I love what he does, he loves what I do, and it was a chance, when they invited me to come and play, to actually work with him. But sadly, I never got to work with him. I was bemoaning that fact with him again, just today [at the Crackle party]. “It’s nice to be on your show, but I’d like to work with you, sir.” But he laughed it off, and he says – I don’t want to give a spoiler alert here, but people who die on this show – there are nine people that die on this show, that’s one more than each episode on this show – they come back as their sibling, if we’re lucky enough to get called back [for a second season]. So I think that’s hysterical. 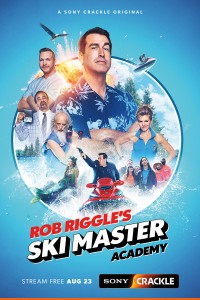 AX: So you may play a twin?

McDONALD: I may play a twin, exactly.

AX: So did you think, the overall project sounds like fun, had you always wanted to play a Southern-accented fisherman …?

McDONALD: Here’s the thing. I’ve done many of those accents, I’ve done many fishermen, but never together. A Southern fisherman, I never did. I thought, “Now, that’ll be different.” So no, I just really wanted to do the show, they invited me, it was close to home, and all the stars lined up. An actor makes choices based on many things, mostly of course script and director and costars. But location is pretty important, too.

McDONALD: They shot it in Malibu, in a place where they have a lot of weddings, a beautiful pond. I’ve never been there before, and I’ve lived in L.A. off and on for close to thirty years, and I thought, “Wow, this place is incredible.” And there happened to be two other productions shooting there at the same time. So I got that going for me. But this was a lot of fun, because it really was pushing the limit of comedy, just getting it out there and being crazy.

McDONALD: I happen to love Crackle. I knew about Crackle. It’s Sony. I worked there for years, I loved it, and now they have this new streaming service that’s free, like Hulu used to be free. A few commercials here and there, but I think it’s great, and they have two or three big original content things, so they’re taking off. I think it’s fantastic. I’d like to do more with them.

AX: What other projects do you have that we should know about?

McDONALD: I just finished a lovely movie up north, called STAND AT PAXTON COUNTY. It is a true story about horse thievery, basically, what happens in North Dakota, the Dakotas and Wyoming, and all those northern states where, out of the winter, the government can come in and say, “Hey, those horses look very sick and it’s animal abuse,” and then they take them to court and then they end up absconding with all these horses and selling them to Mexico or to Canada. And it’s horrible, but it’s been going on for awhile. I love doing those true-to-life stories.

I’m also doing a movie starting in the next month with my old pal Mark Medoff. It’s a movie called A WALK WITH HERB. Herb is played by George Lopez, and Mary McDonnell is in it, and there are wonderful people. It’s a wonderful show, and [Medoff] wrote a part for me. What I love about Mark Medoff is, I did a play [he wrote]. I said, “I’m going to take myself out of [television] politics and do this wonderful play.” My agent said at the time, “Chris, you’re the guy …” I said, “Yeah, I know, I get it. But I tested four times at every network last year, and I didn’t get it because of whatever reason. So this year, I’m doing what I want to do. I’m going for my art.” So I did a play called WHEN YOU COMIN’ BACK, RED RYDER?, it changed my life, had valentines for reviews, and married the girl that played my girlfriend. 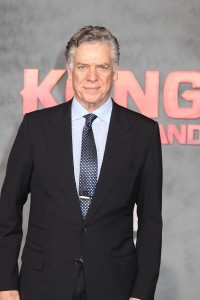 AX: Were you in the original production?

McDONALD: Well, not the original. The original was years ago in New York City, but this was in Santa Fe, New Mexico.

AX: So this was the revival?

McDONALD: The big revival. It was a huge hit, and we moved from Santa Fe to Albuquerque, and it was a life-changer. I was overflowing with this kind of empowerment, being on the stage and playing a character that was so out there, a PTSD kind of guy that was the anchor of the piece, and it was poetry, because Mark Medoff is a brilliant writer, so this new show I’m looking forward to doing and working with him again. This is my fourth time with him. He writes me stuff, because he likes me, which is nice.

AX: And what would you most like people to know about ROB RIGGLE’S SKI MASTER ACADEMY?

McDONALD: It’s a hoot, you don’t want to miss it, it’s great summer fare, and you won’t be disappointed. It’s very, very funny.