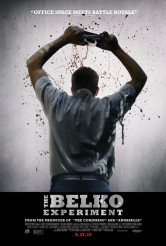 For those unfamiliar with it, 2015’s THE STANFORD PRISON EXPERIMENT, based on Dr. Philip Zimbardo’s book THE LUCIFER EFFECT, chronicles a real-life event that was supposed to be a psychological study that morphed into something so disturbing that practically everybody has heard of it, albeit perhaps not by name.

In 1971, Zimbardo, played in the film by Billy Crudup, then a psych professor at California’s Stanford University decided to conduct a two-week research experiment. Twenty-four male students, to be paid fifteen dollars a day for two weeks of their time, would be broken into groups of prisoners and guards to study what effects, if any, their roles would have on them. The “prison” was a set of empty offices in the basement of a campus building (it was summer and most of the faculty was away), furnished like prison cells. There were tapes and cameras. Zimbardo frankly expected that the whole thing would be rather dull. Instead, things became so heated that things had to be shut down after two days.

THE BELKO EXPERIMENT is (we can hope) not based on an actual experiment, and the time frame of its story is far shorter than two weeks or even two days. Belko is a company that helps integrate Americans into their jobs in South America. On an evidently normal day at the Bogota, Colombia office, staffed mostly by Americans, the building is sealed off with metal shutters. A voice comes over the intercom system, announcing that three people must be killed within a matter of minutes. When nobody complies, there is a demonstration of the bloody power of whoever is now in charge. This is immediately followed by the announcement that the Belko employees must kill thirty of their number within two hours, or else sixty will be killed.

We see a range of responses, from resolutely humanist to pragmatic, self-justifying survival to gleeful mania. Our sympathies are primarily with Mike (John Gallagher Jr.), who is determined to find a way to get around the rising tide of insanity without succumbing to it, but we’re intrigued by a number of other characters as well.

James Gunn is now mainly famous for writing and directing GUARDIANS OF THE GALAXY and the upcoming GUARDIANS OF THE GALAXY 2. However, it’s worth noting that THE BELKO EXPERIMENT’s writer/producer also scripted the DAWN OF THE DEAD remake, as well as the hilarious, grotesque SLITHER. As for THE BELKO EXPERIMENT’s director, Greg McLean is the force behind the WOLF CREEK films and TV series.

Gunn has great proficiency with laughs wrapped in real horror and vice-versa, and McLean can stage violence that is often more brutal because it’s so matter of fact. They have a just about ideal match of sensibilities here, blending humor, grief and shock. The intensity and seeing regular people decide to become executioners, far more than the splatter, turn the mood toward genuine tension rather than horror comedy. There are scenes that are disturbing on a visceral level, which speak to the craft involved, but which also separate THE BELKO EXPERIMENT from the drive-in good-time vibes of, say, Gunn’s SLITHER.

There are a few Gunn acting regulars in the cast, including Michael Rooker, Gregg Henry and Sean Gunn, all terrific. Other standouts include Tony Goldwyn as the boss who tries to keep order as long as possible, James Earl as a conscientious security guard, John C. McGinley, Adria Arjona, Melonie Diaz, Rusty Schwimmer and Brent Sexton.

The ending is fairly clever, honoring what’s come before, and THE BELKO EXPERIMENT asks the right questions, but is structured so that it doesn’t have to provide opinions, let alone answers. Given how well it works on other fronts, this is a bit of a letdown. Otherwise, it’s a strong, sweat-inducing entry that makes sure we’ll never look at a tape dispenser in the same way again.