The actor chats about the PBS MASTERPIECE airing 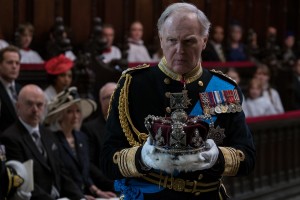 Actor Tim Pigott-Smith, the subject of this interview, passed away unexpectedly at the age of 70 on April 7, 2017, a little under three months after this interview was conducted. He was at the Television Critics Association (TCA) winter press tour in Pasadena, California, to talk about the film version of KING CHARLES III.

KING CHARLES III began life as a stage play. It seems Shakespearean, dealing with the English throne and written by Mike Bartlett entirely in iambic pentameter, but in fact it deals with issues of present and future. The premise of KING CHARLES III is that Queen Elizabeth II dies and Prince Charles succeeds her to become King Charles III. Pigott-Smith originated the role of Charles III in the play’s debut production at London’s Almeida Theatre, then traveled with the show to Broadway for a 2015-2016 run. He was nominated for a Tony Award. Then he reprised the role again when KING CHARLES III was made into a telefilm, which airs on PBS Masterpiece Theatre Sunday, May 14.

Pigott-Smith, born in Warwickshire, England, worked steadily in film, television, theatre and radio over the years. He is perhaps best known as the villainous Ronald Merrick in the miniseries THE JEWEL IN THE CROWN; his memoirs about that experience, along with poetry and other prose pieces, were published as the book OUT OF INDIA. Pigott-Smith also authored several children’s books, and appeared in two different arcs on DOCTOR WHO in 1971 and 1976. In his final year, he was made an Officer of the British Empire (O.B.E.), an honor bestowed by the Queen of England.

As well as proving himself a phenomenal actor, Pigott-Smith demonstrated at this interview insight, kindness, generosity and modesty. He will be greatly missed.

ASSIGNMENT X: Is the O.B.E. a kind of knighthood?

TIM PIGOTT-SMITH: It’s a step towards it, but it’s an inferior honor [laughs]. No, I was very, very thrilled. It was completely unexpected, while we were doing the film. I got a letter from the Cabinet Office, and I had to read it about three times. I thought, “Oh, my goodness …” It’s very lovely. 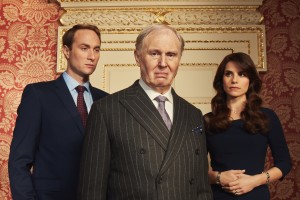 AX: Have you counted how many kings you’ve played over the years?

AX: Have you ever met the real Prince Charles?

PIGOTT-SMITH: I’ve met him once, but not since we did the play.

AX: Do you know if Prince Charles ever saw KING CHARLES III?

PIGOTT-SMITH: I did a film [VICTORIA AND ABDUL] with Eddie Izzard recently, and Eddie says that the Prince rather wishes that he’d seen the play.

AX: Had you done Broadway before taking KING CHARLES III there?

PIGOTT-SMITH: Yes. I’d done Broadway first in 1974 with SHERLOCK HOLMES, when I played Dr. Watson, and then I did it in 1999 when I played Larry Slade in THE ICE MAN COMETH, with Kevin Spacey.

AX: Those were both revivals. How is it bringing a new play to Broadway?

PIGOTT-SMITH: Well, I was very nervous about it, because I was worried that one thing that wouldn’t cross the pond [to the U.S.] was the comedy. I just thought it might not work. But to my great relief, audiences were straight onto it in exactly the same way. There were one or two subtleties that the audiences missed, which were just to do with English folklore. Inevitably, when Charles and Diana were engaged, they stuck them in front of some sort of gate up at Balmoral, with ghastly jumpers [pullover sweaters] on. They looked like a knitting pattern. And somebody said, “Are you in love with her?” And Charles said something terrible, like, “Well, yes, whatever love means.” And I had a line in the play, which was, “I know I did once question what love meant,” and I used to then give quite a hefty pause in England, because people always got that reference. In America, inevitably, just forget it, because how on Earth would they know?

But that’s part of English folklore, really. You just went, “This marriage doesn’t look great, does it?” when you saw that. You thought, “Crikey.” What I’d always felt was that the big tragedy of Charles’s life was not marrying Camilla earlier on. I mean, it’s just terrible. Of course, the Diana saga ended in the most horrendous way, but I think if you take that tragedy out of the picture, the marriage would still have ended very unhappily. They were going to go into the Wars of the Roses, weren’t they.

AX: Well, she was already divorced from him when she died …

PIGOTT-SMITH: Exactly. But it would have gone on, I think, being quite vitriolic. She had such immense power. There was a picture of her in the paper almost every day for ten years after she died. She had immense power. She still does.

I do think [Princes Edward and Harry] are miraculous, actually. It says something for Charles and Camilla that they seem to have survived as well as they have. There must be some internal damage that they simply can’t calculate, particularly with Harry, but I just think they’ve done amazingly. There was one move that I used to do early on, in the funeral scene, Charles wasn’t terribly interested in what was being said, and I just used to walk up the stage with my hands behind my back. And every time I did it, I remembered Harry walking behind the casket on the day of Diana’s funeral – this is an eleven-year-old boy, walking with his mother’s body in this thing in public. What on Earth can be going through his head?

PIGOTT-SMITH: The premise is just that we start with her death.

AX: At this point, Charles is just completely relieved that he’s finally king, or does he have any sense of, “I lost my mom”?

PIGOTT-SMITH: No, he’s very upset that she’s died, but he’s also kind of excited that at last he’s king, after waiting all his life. And nervous about what those implications are. There’s a great line – “My life has been a lingering for the throne.” He’s waited all his life for this moment. And then of course, getting there, he sort of over-reacts. He suddenly uses the power too much, and [he has] the great speech to the Prime Minister [when he’s asked to sign legislation that he doesn’t agree with]. Charles says, “How can I possibly allow this?” [The Prime Minister] says, “Think what your mother allowed.” She signed the Empire away, she changed laws on homosexuality – it’s amazing. And she just signed everything. She took her policy decision to be quiet and just there. And actually of course, that is what we love about them, that in a changing world, they offer some permanence and comfort.

AX: Can you talk about your experience with THE JEWEL IN THE CROWN? It was such a tremendous success, both in the U.K. and in the U.S. …

PIGOTT-SMITH: Well, you just feel incredibly lucky, don’t you, because it took two years to make, so it was a big chunk of your life. But as with CHARLES, you never know until people sit down and watch it on the television whether it’s going to work or not. I mean, literally, you had a feeling – we were out there in India, filming away – and you thought, “This is good work, actually. I think this is quite good work.” But [the production company] Granada had made BRIDESHEAD REVISITED just before, and you felt the chance of lightning striking in the same place twice was pretty remote. So it was just astonishing that it turned into this massive success.

AX: Because there isn’t a KING CHARLES II PART II waiting in the wings, I’m assuming …

PIGOTT-SMITH: I think the only thing that will really impact on its reception is whether the Queen is still alive or not. If the Queen was to happen to die, the context of the film would be radically changed. I mean, I don’t think the play would be doable for another fifteen or twenty years, because that situation has changed. And of course, when the Queen was ill recently at Christmas, England goes into a weird sort of state of paralysis. There’s a wonderful speech – [in the play], Harry goes AWOL one night and talks to a kebab seller in a store. Harry buys a kebab, and the kebab seller looks at the note [cash bill], and he says it’s out of date. Every note in our country will have a different picture, every coin will have a different picture on it, and the kebab seller says, it’s like this kebab. England’s falling apart. Take this slice off, there’s less money for the NHS [National Health Service], this slice off, we don’t finance the army in the same way. Is the only thing that holds us together this woman, or is it the institution? We don’t know. So the point about the play in England is that it really speaks to a moment in our history when people are thinking, “What’s going to happen when she dies?” And this Christmas, it was extraordinary. There was a sense of, “Oh, God.” And then when you finally saw her, looking very frail, going to church after about a week …

AX: Have you had interactions with the British Royal Family at anything you’ve done on stage?

PIGOTT-SMITH: They’re not really very theatrically crazy. Princess Margaret was. She liked going to the theatre. I played to the Queen. It was the night the National Theatre became the Royal National Theatre, and it was not what I call a happy night [laughs], it wasn’t a good performance. Because audiences, when the royals are in, audiences don’t watch the play, they watch the royals. And there was one line I had in the play that we were doing that used to very often get a big round. And on the night we played for the royals, Prince Philip went, “Hnnh.” And a sort of [very mild chuckle] went around. That was it. That’s what happens.

PIGOTT-SMITH: She did come back, yes. She talked to the actor playing Caliban. We were doing THE TEMPEST. And he wore very little – a codpiece with a chain on. He was completely covered in blood and filth, and he had two little horns on his head, and the Queen said, “What did you base your makeup on?” And he said, “My agent.” [laughs] It was a wonderful picture of the Queen laughing. It was the only time she had all night. There’s a wonderful picture of her with this man, roaring her head off. It was very funny.

PIGOTT-SMITH: Well, two questions – will he have to wait for Mum to die? Yes. I think she absolutely believes that she is God’s anointed on Earth. And if you believe that, abdicating is very, very difficult. I think Charles recognizes that it’s in his best interests to believe that he’s God’s anointed on Earth [laughs], so I think he will definitely take the job, unless he happens to be eighty, which he could be, if the Queen lasts as long as her mother. He could be eighty. Then it’s just possible that he might defer to William, but I kind of think, having waited this long, his inclination will be to want to do the job. And I think he’ll be rather good at it. I don’t go along with people who say he shouldn’t be allowed to say what he thinks. You don’t have to do what he says, but don’t not allow him his opinion. He knows and loves the country. Just let him – I think if you push him out, he’s the kind of man who will get a bit spiky and want to be involved. If you just allow him to have a voice at the table, he could be a very interesting and useful component