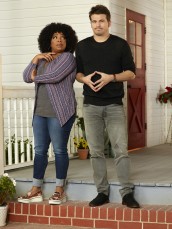 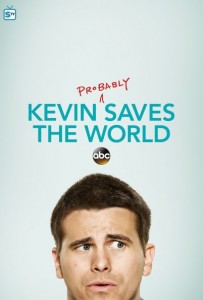 Michele Fazekas and Tara Butters created KEVIN (PROBABLY) SAVES THE WORLD together. The writing/producing partners are also responsible for REAPER, about a young man, Sam, who discovered his parents had sold his soul to the Devil, played by Ray Wise. Butters and Fazekas originally met each other working on THE X-FILES. They subsequently teamed up as writers/producers on LAW & ORDER: SVU, DOLLHOUSE, HAWAII FIVE-0, RESURRECTION and AGENT CARTER.

ASSIGNMENT X: KEVIN (PROBABLY) SAVES THE WORLD seems to tread a fine line between appealing to religion and people who are more into general fantasy …

MICHELE FAZEKAS: We really did want to write a show where it’s like, you can be religious, you can be not religious, you can have any belief you want and still have something to click into. So that, more than any sort of espousing any sort of religious belief, was the most important thing for us. We never want to quote from any sort of spiritual or religious text. And we’re not going to. So we’ll take some of the archetypes and do our own version of them.

AX: Are you particularly fond of the storytelling style that allows you to pop a character in suddenly next to someone’s ear, as you do with Yvette in KEVIN and as you did with the Devil in REAPER?

FAZEKAS: I think it’s funny [laughs]. So yeah. We consciously do it a little bit differently on this show than on REAPER, because REAPER – Ray Wise would only be in a room with Sam, and then if somebody else came into the room, all of a sudden, he’d be gone. It’s slightly different on this show, and we try not to have Yvette pop up and pop away like Ray Wise did. But that being said, I think it’s always funny when somebody pops up and starts talking to you and no one else can see them. We do that one in the pilot with Yvette, where she shows up in the car and says, “I have a question,” and Jason’s reaction is so funny. So I will admit, I do like the comedy of that.

AX: At the outset, Kevin does small good deeds for those immediately around him. Will he eventually be tasked with doing bigger things than cheering up Reese or helping his neighbors?

FAZEKAS: Ultimately, he has to find and anoint thirty-five other Righteous on Earth. But he’s not going to find one every episode. I would say one or two a season. Because his week-to-week job is building his spiritual power by being selfless, by helping people. And listening to the universe, and the universe will guide you into how to do so. Even when you think of what his job was in the pilot, which was, get your niece to talk about her dad and maybe decide to come out of her shell a little bit. It’s such a tiny thing, it’s such a little thing, but I actually love that. He’s not going to be a superhero every week. He’s going to be doing little tiny things that will seem individually insignificant, but have a greater purpose.

AX: Can you talk about the balance between serialization and case of the week?

FAZEKAS: We did do that on AGENT CARTER. I would even back it up, how X-FILES did it. X-FILES had their long mythology arcs, and then their individual episodes, and at their best, each individual episode would touch on both. You’d have the monster of the week, but then some of the mythology would be in there. I feel like that was brilliant, how they did it. So I would even back it up to that. And that’s how Joss [Whedon] did it, too. We worked for Joss on DOLLHOUSE, and we were huge admirers of his. I think it’s such a different world now with binge-watching and Netflix releasing an entire season of a show at once, so I think you have to play in both arenas. Some people will only be watching it as it airs on ABC, some people will be watching it online. Some people will wait until it all airs. So having a little bit of both doesn’t hurt.