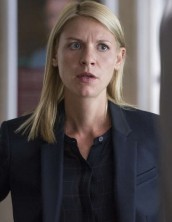 HOMELAND: The scoop on Season 6 from co-creator Alex Gansa – interview

The executive producer also talks when the series will end 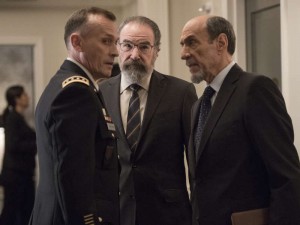 Robert Knepper and Many Patinkin on HOMELAND | © 2017 JoJo Whilden/SHOWTIME

HOMELAND is now in its sixth season Sunday nights on Showtime. The Emmy-winning drama focuses on the worlds of Homeland Security and the C.I.A., as seen through the eyes of Carrie Mathison (Claire Danes, who has acquired two Emmys in the role).

In HOMELAND Season 6, Carrie has left intelligence work behind her – sort of, she is secretly advising the U.S. President-Elect Elizabeth Keane (Elizabeth Marvel) – and is working in New York City as a lawyer with a social justice group. Carrie is currently trying to help a young man who is accused of fomenting terrorism, even though it seems that he was entrapped. Meanwhile, Carrie is a single mom, still struggling with her bipolar condition, raising her young daughter Franny and trying to help brain-injured former colleague Peter Quinn (Rupert Friend).

At the same time, Carrie’s old friend and mentor Saul Berenson (Mandy Patinkin) and his associate Dar Adal (F. Murray Abraham) are trying to maneuver around the restraints the President-Elect wants to put on the C.I.A.

Alex Gansa, who created HOMELAND with Howard Gordon (based on Gideon Raff’s Israeli series HATUFIM), is still aboard as show runner. He talks about Season 6, and how, why and when HOMELAND is likely to conclude.

ASSIGNMENT X: Is one of the reasons you’ve set Season 6 in New York because Claire Danes and Mandy Patinkin both have their families and kids there?

ALEX GANSA: One hundred percent. Everybody wanted to come home. And we owed it to them. We’ve been in Morocco and we’ve been in Cape Town – my God, that was far away – and then Berlin last year. Everybody just was ready to come home, and everybody has been such great troupers.

AX: Is Carrie’s mental state still a significant element of the story?

GANSA: Carrie’s struggle with her bipolar illness is always going to be part of the show, because it’s always part of any person that has bipolar illness, and there will be periods of time where she has it much more under control, and periods of time where she doesn’t. I would say as people tend to get older, they tend to get better at managing this. They understand to stay on the medication, they understand to get a lot of sleep, they understand not to put themselves under too much stress, although I know Carrie doesn’t actually subscribe to that last one [laughs]. But she’s gotten better at managing her illness.

AX: Do you now have somebody on staff who can speak Arabic?

GANSA: We have great consultants this year. But we don’t have anybody on staff that actually speaks Arabic.

AX: But do you have someone in place to prevent unwanted graffiti? Last year, you hired some people to write graffiti in the refugee camps in Arabic, and it turned out that the graffiti said some uncomplimentary things about HOMELAND …

GANSA: [laughs] That was amazing.

AX: How much do real-world events affect what you’re scripting?

GANSA: We don’t have a lot of flexibility. For example, last season, the scripts were already written, and then Paris happened. You find yourself a little uncertain about what that means. It certainly causes you to question what kind of message you’re putting out into the world, and what kind of message you want to put out into the world. We are not planning this season to dramatize anything that happens to New York, because that’s bad karma.

AX: You’ve said that everyone is planning for HOMELAND to end at eight seasons?

GANSA: We’re definitely out at 8. This writing team is definitely out at 8, and we would like to draw the series to a close at the end of 8, but the economics of the business – I have no idea what’s going to be going on. Will Showtime want the show to continue? Will they make a huge deal with somebody? That’s their decision. There was a negotiation between Fox and Showtime about how many more seasons there were going to be. The show is hugely successful financially, and so there’s a natural inclination to keep it going as long as it is. And when I was consulted, and when Howard was consulted, we thought about how many years can we keep this going and keep the level of quality up, and tell stories that we’re actually interested in telling. And so we thought, “Seven or eight seasons,” and they jumped on the “eight.” And so that’s what we’re doing.

AX: Would you ever consider carrying on the show with a different lead character?

GANSA: Not for me. I think that this world is so fertile in terms of telling stories, and especially now, but when this show is over after eight seasons, with this incredible cast, you could just never assemble anything like this again. I just think – I’m sort of dying to go off and do something else. I could imagine the show continuing, I could imagine there being a new brain trust involved and finding a character to take Saul forward and spin it off, but it’s not going to be my show any more.

AX: What does this mean to you?

AX: Are you starting an arc this season that will carry through the remaining two seasons?

GANSA: [laughs] We are not nearly that smart.

AX: Are you personally with HOMELAND through the end of the eighth season?

GANSA: Oh, definitely. I feel so lucky to have these actors. And it is incumbent upon us [the writers/producers], every script, to give them the very best that we can give them. And also to show them all the way through to the end. How’s the story going to end? What’s going to happen to Carrie and Saul? Because we’re all fascinated by that idea in the story room, and want to deliver for these guys. So Season 8, that will be the last one for us.

AX: Do you want to be able to close the series as you leave?

GANSA: That’s the idea. The idea is really to tell the end of the story. I don’t think there’s any other point in doing it. I don’t think we’re going to leave the show open-ended. But you never know what can happen after that.