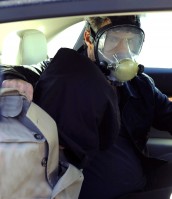 The exec producer talks what's new in this show 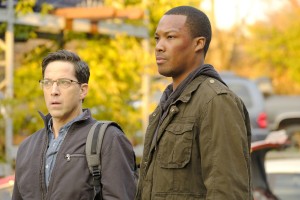 Dan Bucatinsky and Corey Hawkins on an upcoming episode of 24: LEGACY | © 2017 Guy D’Alema/FOX

In 24: LEGACY, the Counter-Terrorism Unit (CTU) is once again fending off crises in one-hour real-time installments Monday nights on Fox Network. Newly-returned U.S. Army Ranger Eric Carter, played by Corey Hawkins, is recruited by the agency. He’s learning the ropes of what Jack Bauer used to do, with emergency on-the-job training.

Executive producer Manny Coto co-created 24: LEGACY with Evan Katz; 24 creators Robert Cochran and Joel Surnow are also credited with devising the spin-off. Coto was previously an executive producer and show runner on the latter seasons of 24. He also created the science fiction series ODYSSEY 5 and worked on STAR TREK: ENTERPRISE and DEXTER.

ASSIGNMENT X: Had you been looking to do something different in the 24 universe for a long time?

MANNY COTO: Not really. We did the London experience, the London 24, a couple years ago, which was great. It was fun to bring it back. But we weren’t really planning on bringing it back. It was more the idea of it came up and the idea suggested itself of this character who was an Army Ranger who had killed a terrorist and was being hunted. We thought it was a cool “in” to a brand new series, and we realized it would fit really well into the 24 universe. So it kind of started with the idea and then kind of branched into 24.

COTO: Well, a little of both. I think we wanted to recall the old CTU that we love, but at the same time, make it bigger and livelier. That’s why, if you notice, this is actually referred to as National CTU, so it’s really the main nerve center of CTU, whereas the other branches would have worked for it. So technically, the L.A. CTU would have been a branch of this National CTU.

AX: So this is the CTU that oversees all the others?

COTO: That’s right. It’s in Washington [D.C.] and it oversees them all.

AX: How did you decide on Corey Hawkins as your lead?

COTO: He’s a great actor. First of all, he read the script and really responded to it. When we Skyped with him, we saw someone who had an earnestness and believability and ability to make us feel for him. I think the most important thing was [to] have a character that we go with, the audience likes immediately and identifies with and will lead us into this strange world, and Corey had all of that.

AX: And what makes his character, Eric Carter, stand out as different in this world?

COTO: One of the things about having this character is, he comes from the battlefield, where there are orders. There’s the enemy. That’s my order. That’s who the bad guy is. That’s who I take out. When he gets plunged into this [24: LEGACY CTU] world, he’s learning and coming to grips with the fact that the enemy may be one of us. The enemy may not be who you think it is. There are allegiances that aren’t played out as they are on the battlefield, where you have your comrades and everybody’s in it. So the more he’s plunged into this world, the more he realized that the choices he made and was used to making on the battlefield don’t apply in this environment.

AX: Are you shooting Los Angeles for Washington, D.C.?

COTO: No, we’re shooting in Atlanta for Washington. So at least there’s an East Coast feel there.

AX: Your fellow executive producer/show runner Howard Gordon also weighed in on this – with what happened with this election in the real world, are you concerned that you can’t do stories that have the unveiling of secrets as a plot point, as in, if somebody finds out that the Russians hacked the election, nobody cares in real life …

COTO: [laughs] Usually, though, the secrets that we find are not about hacking and general stuff like that, it’s more of somebody was working with the terrorists, which is not something you can kind of brush off, so I think we’re safe in the kind of secrets that we reveal.

AX: Even though Carter is a different type of main character, does 24: LEGACY still have the same amount of blowing up/action per episode that we’re used to with 24?

COTO: I think so. I think I’ve said before in another interview, 24 when you really examine it doesn’t have that much action. There’s action, but it’s really a drama that has action overtones, or at least a drama thriller. And so the action happens where it happens, but it’s mostly centered on the thriller aspects.

COTO: Well, technology-wise, certainly the drones, the appearance of drones and the proliferation of drones we’ve used in how we track people. It used to be mostly satellites. Now it seems anybody can fire off a drone whenever they want. So little things like that do impact the story. We try to keep ahead of stuff, but that is one aspect that we’ve incorporated into the show.

AX: Are your drones practical or CGI?

COTO: I think the ones we’ve used so far are practical. We actually use drones to film some scenes. The big scene in the pilot where he goes running off by himself, the high-angle shot, that was a drone that we used. That was cool.

AX: And what would you most like people to know about 24: LEGACY?

COTO: That you don’t need to have watched the previous installments, and that it’s a brand new thriller, starting from scratch, with a brand new character that I think you’re going to fall in love with.