He also talks about the return of Carlos Bernard to the series, Corey Hawkins and more 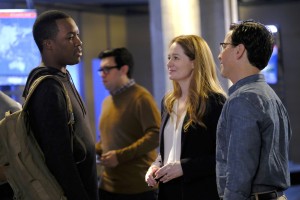 Fox Network’s new Monday-night thriller 24: LEGACY is in some respects its own show. Corey Hawkins stars as military veteran Eric Carter, who begins working with the Counter-Terrorism Unit (CTU) over the course of one intense day, rather than starting out as a seasoned CTU agent like Kiefer Sutherland’s Jack Bauer. But this is a legacy of the original 24, with some returning characters – like Carlos Bernard’s Tony Almeida – the same ticking-clock time frame, and a lot of the behind the scenes creative team once again in the driver’s seat.

Among the returnees is executive producer Howard Gordon, who was one of the show runners for a number of years on 24 and 24: LIVE ANOTHER DAY.

ASSIGNMENT X: Did you want to come back to the 24 universe, or is this like, “Home is where they have to take you in”?

HOWARD GORDON: We [fellow executive producers Evan Katz and Manny Coto, who are credited as creators on 24: LEGACY with original 24 creators Robert Cochran and Joel Surnow] loved the show and love working together so much. We’ve been talking about this for fifteen years. I think the first show had to run its course before we got here. This wasn’t like an exercise in let’s polish a brand and put it out there. This was absolutely something that made us excited to do.

AX: 24 always had a balance between action and politics. Is 24: LEGACY going to continue that balance?

GORDON: I would say yeah. The show has always had an UPSTAIRS, DOWNSTAIRS thing where, whether it’s been a president or a candidate or a secretary of state, and Jack was always the on the ground person who was working with this guy, I think what we’re going to see is the emergence of Corey’s character and Jimmy Smits’ character, ultimately. But right now [Carter’s] relationship is with Rebecca [the CTU officer played by Miranda Otto]. The short answer is yes, but it’s sort of understated in this case, more than usual.

AX: Are there any technological advances that further the story that you couldn’t have done earlier in 24?

GORDON: It’s funny. I would say that our fiction was like five seconds ahead of reality then; now, I think reality is five seconds ahead of us. We have a very good relationship with Samsung at the moment. Everything that we need the show to do, they have it, it’s out there and consumers can have it. There is stuff that we’re positing that, back in the day, the network would say, “How could that happen? How could there be drones? How could there be hacking?” And now it’s like everything has caught up to it.

AX: How much of an impact will the Tony Almeida character have on 24: LEGACY?

GORDON: Significant. He really does have a relationship with one of these people, I don’t want to say who, but that past is going to come home to roost, and then he will be instrumental in Carter’s education. Carlos is, as Manny was joking, of the seven, eight hundred actors on the show, he’s actually a friend, a really good friend, and we love working with him, and he’s so talented.

AX: How changed is Tony going to be from when we last saw him?

GORDON: No character is ever the same. Every character has grown or been damaged or scarred from where they’ve been before, so he’s not exempt from that.

AX: In the past, you had plots, particularly with Gregory Itzin’s corrupt President Charles Logan, that pivoted on secrets, like, “If we find out this about the President, he’s not going to be the President anymore.” Can you do those plots any more with a straight face, or is it like, “Nobody’s going to care”?

GORDON: That’s a really good question. Reality, like technology, has sort of eclipsed our ability to imagine it. It really is. It’s kind of weird. It’s disturbing. But it does make how we view and look at things very different. You know what? We’ll see. In humility, I do not know what this audience at this time will make of this show. I think as long as we tell a good story with good characters [it should work].

AX: In general, how do you think what’s going on with the real world is affecting storytelling right now?

GORDON: I always think it’s perilous to start reverse-engineering or anticipating what it means. I really mean that. I think you have to be very careful not to be entirely counter-factual, and [think about] how our creation is going to be viewed by an audience living in the Trump world. I think that the win in this show is if we insult and are embraced by both sides of the aisle. Which the old show was. Some of the media may have edged us toward being right-wing apologists, but in the end, it was a show that people on the right side of the aisle and on the left really dug.

AX: If 24: LEGACY continues past this season, might the main characters start looking for Jack Bauer?

GORDON: I hope so. I hope so. Never say never. First of all, [Kiefer Sutherland has] got a show [DESIGNATED SURVIVOR], the show is a hit, and so that’s awesome, but I would love, I think it would be fantastic if once this show gets some momentum and is its own thing, I’d love to see Jack in this brand.

This interview was conducted during Fox Network’s portion of the winter 2017 Television Critics Association (TCA) press tour in Pasadena, California.