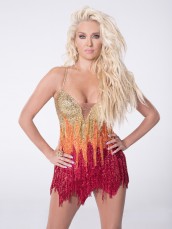 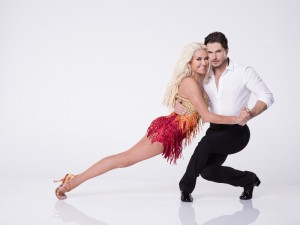 It’s Disney night on DANCING WITH THE STARS! Mickey, Minnie, Donald and, making her first appearance on DWTS, Daisy all joined in on the fun while ABC self promoted all its upcoming features for the next couple of years. Okay, it was fun to watch too, but blatant, oh definitely. Top of the leader board this week was an almost perfect Normani Kordei & Val Chmerkovskiy who fell from the leader board last week and wound up more in the middle of the pack. Followed closely behind them is gymnast Simone Biles & Sasha Farber, could this finally be the year Farber makes it all the way? Maybe. Nancy Kerrigan & Artem Chigvintsev rounded out the top three while Cubbie David Ross & Lindsey Arnold ended the night in last place. C’mon Cubs fans root for the underdog… again! Stay tuned!

Nick Viall (Bachelor star) and his partner Peta Murgatroyd
Enjoyable. Inaba thought his Jazz routine was a breakthrough for him. Goodman said there was a feel good factor. Hough said it was better. Tonioli saw an ease in him.
Scores: Inaba – 9, Tonioli – 8, Hough – 9, Goodman – 8, Harland – 8

Who Went Home: Erika Jayne & Gleb Savchenko
Who Has Legs to Take Home the Mirror Ball: Three words – Rashad, Rashad, Rashad! Simone in an Olympic gymnast two-peat or Normani, although Heather is creeping up to all of them.