The actor also talks SPIDER-MAN: TURN OFF THE DARK 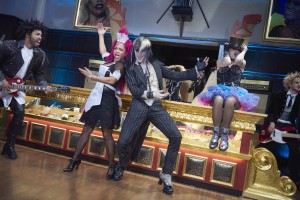 ASSIGNMENT X: After three years on PENNY DREADFUL, when you got ROCKY HORROR, did you have a moment of feeling like, “I’ve been doing Gothic dead seriously all this time, and now I’m doing Gothic ROCK HORROR style?”

REEVE CARNEY: Yeah. That’s my favorite thing to do as an actor, and sort of my goal, to jump as wide of a distance [as possible] between the last thing I’ve been involved with to the thing I’m currently involved with. So it was really a blessing for me to have something that was so comedic in nature. I’ve never done anything like that, really. I’ve worked on Broadway, playing Peter Parker in SPIDER-MAN: TURN OFF THE DARK, but my part of the show wasn’t particularly comedic. It was just great to play a character [like Riff-Raff] that comes from this place. It’s sort of a different layer of darkness, ROCKY HORROR PICTURE SHOW.

AX: In a way, it seems like there’s a through-line between Dorian and Riff-Raff, because they’re both people who are observing some very strange things, and sticking their knife in when people least expect it …

CARNEY: That probably is a similarity, yeah. I do like a good challenge, and I like flirting with certain things that might be considered taboo or slightly dangerous. I think maybe that is the through-line. Even with Spider-Man, if you think about it, he’s jumping off a building. [laughs] I don’t know. I hadn’t really thought about the connection, but maybe you’re right.

AX: SPIDER-MAN: TURN OFF THE DARK was known for, among other things, cast members getting injured during performances. Did you ever feel like you were in physical danger yourself?

CARNEY: Not more than you would in any other given situation. I mean, I had sports-related little repetitive motion-type things that you always get in a Broadway show. The nature of being in live theatre – it’s not easy on the body, so I think that’s something to be expected, but thankfully, some of the things that you heard about, like [Spider-Man stunt double] Chris Tierney, for instance. He made a full recovery in four months, which was a miracle, really, and so he was back in the show by the time we opened.

AX: There were also a lot of script changes during the run of the show. Were you there for all of that?

CARNEY: I was, yeah. I was there from the beginning – I stayed for three years.

AX: Has it been a relief since then to be in television productions, where the scripts were a little more locked?

CARNEY: Well, I think working on text that already exists, it allows you to free up certain parts of your brain to do some of the more internal work, rather than memorizing the new lines you have every day. Because [SPIDER-MAN: TURN OFF THE DARK] was tough – it was like doing repertory theatre, almost. Because there was a time in which we were doing the 1.0 version, as we called it, while rehearsing the 2.0 version. Full two-and-a-half-hour versions, each of them, and they were both completely different scripts. So that was confusing for me during that period. We were performing one script at night and rehearsing a different script in the day [laughs].

AX: On ROCKY HORROR, the script has been locked for a little over forty years now … 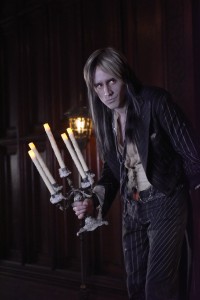 AX: What was your first ROCKY HORROR PICTURE SHOW experience?

CARNEY: I went to elementary school around the corner from the Waverly Theatre at a place called the Little Red Schoolhouse. So I used to walk by and see the marquee, ROCKY HORROR PICTURE SHOW, for the midnight showings. But it didn’t seem like something that my parents would let me see at the age of eight. Which is one reason I’m so excited for this particular version of the show. One thing that [executive producer] Lou Adler said at Comic-Con is that there are a lot of Brad and Janets in the world that might not for instance be allowed to go to a midnight showing at a certain age, but this is going to be brought to them in their homes through their television, and I think that’s really exciting, because there’s a message that I think is important for young people to see, one of them being, “Don’t dream it, be it,” just the inspirational nature of this show and the fun. I think it’s something that everyone deserves to be able to see it. I think it’s great that we’re putting it out for people to see it in that way.

AX: Did you finally get to see it at the Waverly?

CARNEY: No, but I did get to see it in Toronto. I tried to see it in L.A., because as a teenager, I’d seen various scenes, but I’d never watched it all the way through until I got the audition. I thought, “I’d better watch this thing.” So then I watched it four or five times, back home, and then finally went to see it in Toronto, with one of the shadow cast performances, and that was crazy [laughs]. Maybe they do have a script for the call-outs, because I’m telling you, there were more call-outs than actual lines in the film in this particular shadow cast production. You couldn’t even really hear what was going on in the show. So I think that’s another reason we’re a bit more selective with choosing call-outs. Because it can get pretty messy [laughs].

AX: Have you had any communication with ROCKY HORROR creator Richard O’Brien, who was the original Riff-Raff?

AX: Were you at Comic-Con for PENNY DREADFUL?

CARNEY: The two preceding years, I was there for PENNY DREADFUL, and this year, just for ROCKY HORROR.

AX: Can you talk about the differences between the Comic-Con response to PENNY DREADFUL and to ROCKY HORROR?

CARNEY: Yeah. Let me think about this. Well, I think the part of PENNY DREADFUL which fans were most intrigued by the first season, at least in terms of my involvement, seemed to be related to my love scene with Josh Hartnett. There’s not a whole lot of that in ROCKY HORROR, but I think one of the differences was that. But they were equally fun.