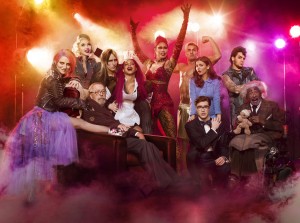 THE ROCKY HORROR PICTURE SHOW, which debuted on the big screen in 1975, got a modest response at the time of its initial release. Nobody involved – creator Richard O’Brien, producer Lou Adler or star Tim Curry – had any idea that their movie, based on O’Brien’s original stage musical also starring Curry, would turn into the midnight movie experience by which all others are judged.

Every weekend, all over the U.S. (and in other countries as well), fans dress up as the characters and act out the whole show in front of the screen as THE ROCKY HORROR PICTURE SHOW unspools behind them. Other fans in the audience chant back responses to the screen and come armed with props – water pistols, rice, toast and other items that have worked their way into the lore of the show.

At the center of it all is Curry’s indelible performance as alien mad scientist Frank N. Furter, a “sweet transvestite from Transsexual, Transylvania.” Curry went on from there to a career spanning film, TV and stage, including three Tony Award nominations. He has recovered well from a serious stroke that occurred in 2013.

Now producer Adler is bringing a new production, THE ROCKY HORROR PICTURE SHOW: LET’S DO THE TIME WARP AGAIN, to Fox Network on October 20. Directed by Kenny Ortega, the telefilm of the musical incorporates the audience participation aspect of the midnight shows without tampering with the actual text.

Laverne Cox brings her own interpretation of Frank N. Furter to the enterprise. However, Curry is also in the cast, this time as the Criminologist, aka the Narrator.

Curry, Adler, Ortega and a number of cast members discuss the subject at a Q&A panel held by Fox Networks for the Television Critics Association press tour.

Asked on the panel if the new production was a nice surprise, or whether they were at the point where nothing about ROCKY HORROR PICTURE SHOW could ever surprise them again, Adler turned to Curry. “Tim?”

“I’m pretty much there,” Curry stated.

Regarding the two productions, Curry says, “I remember quite a lot of the original film as it was my first movie, and I didn’t miss much. It was fun, though to do it again, I actually offered myself [for the role of paraplegic] Dr. Scott, because I was already in a wheelchair. They thought the Narrator was a better fit, and I enjoyed it a lot … Kenny [Ortega] runs a set where you really feel you can try anything, and it was a lot of fun.”

Ben Vereen, who plays Dr. Scott in the new version adds, “Having Tim Curry greenlight this meant so much to myself, and I’m sure for all of us. To have this man with us was it. For me, I couldn’t wait to get there just to be able to work with Tim Curry.

“And the same goes for the fans,” Adler elaborates. “As you can imagine, when we announced that we were doing this, there was a tremendous backlask from fans that have been people that have been with us for forty years. That all loosened up and all became more interesting to them when Tim signed on. His validation, and also [his participation] as an actor just gave them something to look forward to.” 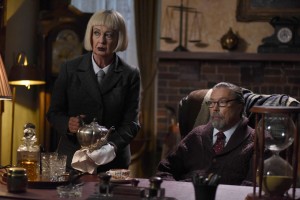 Ortega contributes, “I’ll never forget the first day of rehearsal for the album, which preceded our physical rehearsals. Laverne was standing at the piano and was getting ready to sing ‘Sweet Transvestite’ for the very, very first time. And Tim was sitting at the piano next to the pianist. And when she finished, the first voice that came out was ‘Brava’ from Tim Curry. And that’s what we all felt throughout this entire experience working with Tim – his generosity, his wit, his charm, his elegance. He is just a true pro, and every day on set with him, he placed his trust with us, and we had a blast. We had a ball. It was so great to have you there, Tim, you know. You really made the difference. And I know I say that from all of us.”

“Thank you,” Curry replies. “I loved being there.”

Does Curry give the new production of ROCKY HORROR PICTURE SHOW his unconditional endorsement? “I do indeed.”

And what does Curry think about Frank N. Furter being his enduring legacy? He deadpans, “There’s not a lot I can do about it, really.”

AX: Were you looking to do a project in general at this point, or did you do this specifically because it was ROCKY HORROR?

TIM CURRY: I did it because it was ROCKY HORROR.

AX: Have you done any other productions of ROCKY HORROR playing roles other than Frank N. Furter?

CURRY: No. And don’t hold your breath.

AX: How do you like the way they integrate the audience participation aspect into this production?

CURRY: I thought it was smart.

AX: For a while in your past, you kind of didn’t want anything to do with ROCKY HORROR …

CURRY: It is fair to say that I distanced myself.

AX: What brought you back to it?

CURRY: Lou Adler and the material.

AX: And what would you most like people to know about the new production now?

CURRY: They did a good job. It’s very bright.