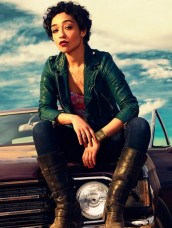 The actress talks her explosive new character and her stint on AGENTS OF S.H.I.E.L.D. 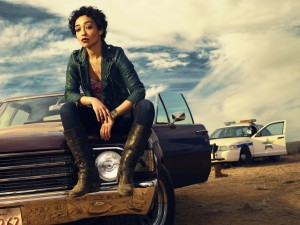 When we meet Ruth Negga’s character, Tulip O’Hare, in the first episode of PREACHER, she is ecstatically winning a fight to the death in the front seat of a car, biting off part of a man’s face in the process. Later, Tulip enlivens two young children’s otherwise dull afternoon by giving the kids an exciting arts and crafts lesson in how to make an improvised rocket launcher. Clearly, Tulip is not a standard TV heroine.

Then again, AMC’s PREACHER, Sundays at 9 PM, is not a standard good and evil show. Tulip’s former and perhaps future lover Jesse Custer (Dominic Cooper) has returned to be a preacher in his small Texas hometown, even though he’s possessed by supernatural forces. One of Jesse’s closest allies is alcoholic Irish vampire Cassidy (Joseph Gilgun). All over the world, people are spontaneously exploding, and it’s up to Jesse, Tulip and Cassidy to investigate. The series has been adapted for television by Seth Rogen, Evan Goldberg and Sam Catlin from the graphic novels by Garth Ennis.

Negga hides her real, mostly Irish accent behind Tulip’s Southern tones when working in PREACHER. The actress explains, “I was born in Ethiopia and raised there until I was four, and then I spent my younger years in Ireland, in County Limerick. I love it. So when I go home, [the Irish accent] gets stronger, but I went to secondary school in London, and I went back to Dublin to do Trinity [College], to train, and then I lived there for awhile, and I came to London. So it’s all over the place, really. When I’m nervous, [or] when I go home, it’s stronger.

“It’s very important to get an accent right so people hear it. But a lot of us now at this stage have had nomadic lives, so we all have – there’s not one way of doing [an accent]. I think, when you’re doing an American accent, you’ve got to be specific, and you’ve got look to your [research]. That’s the bottom line. It’s like when people do Irish accents – sometimes I think, “Come on.”

Negga has done a number of genre roles, including the recurring character of the duplicitous Inhuman Raina on MARVEL’S AGENTS OF SHIELD, the queen of a fantasy realm in the recent film WARCRAFT and a World Health Organization doctor in WORLD WAR Z. On the classical side, Negga also appeared as Ophelia in the filmed 2010 National Theatre production of HAMLET. Negga will also soon be seen as the historical figure Mildred Loving in the film LOVING, about an interracial marriage that changed U.S. law. 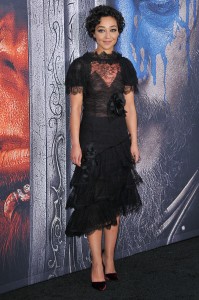 AX: Do you feel like your experiences on AGENTS OF SHIELD were a good primer for doing U.S. fantasy/horror/sci-fi TV?

RUTH NEGGA: Yeah, in many ways. Certainly for the comic book sort of poppiness of it. I just quite liked the broadly painted females that I kind of enjoy playing. With a lot of subtlety running through them, but they’re big characters, they’ve got big things to say. They inhabit the same universe.

AX: Do you see any similarities between Tulip and Raina?

NEGGA: They both have an agenda that is personal to them. But with Raina, I always saw her as more of a panther. Tulip just goes in there and gets her prey, there’s no messing about. But they are both unapologetic and unafraid to go after what they want and don’t really care what anyone thinks. They both are very different individuals, but yeah, definitely [they have aspects in common].

AX: Tulip really enjoys fighting, so you’ve got a lot of very complicated fight scenes while looking very happy. Is it difficult sometimes to remember, “Tulip needs to look like she’s having a good time, and I need to move my fist just this far not to break the guy’s nose for real, and I need to be moving this foot that way?”

NEGGA: Do you know what? It’s not, actually, because we have such a great group of people training us and looking after us. The stunt guys are so good at what they do, and they’re super-careful. They’re always looking out for you, and in many ways, you don’t really have to worry that much, because you’re being so looked after, and the main thing is performance. I just feel we’re very lucky. I really enjoy it.

AX: Despite Tulip’s ferocity, you make her look very wide-eyed and sweet most of the time …

NEGGA: But that’s the brilliant thing, isn’t it? You’re just expecting this little mousy … That’s the joy of it. When I was watching it, I couldn’t help but smile. I forgot it was me. When I watched the pilot, I was so excited, and when it was over, I was thinking, “God, when’s the next one going to be on?”

AX: Would you say Tulip is afraid of anything, except possibly her feelings about Jesse?

NEGGA: I think Tulip is unafraid of most things, but maybe she has intimacy issues. Don’t we all? [laughs]

AX: How aware were you of PREACHER adapters/executive producers Seth Rogen and Evan Goldberg before working with them?

NEGGA: Oh, very. I’ve seen lots of their films. They’re awesome. You have to put aside, when you work with famous people that you’ve seen on TV, your nerves and your apprehensiveness about talking, just opening your mouth. You quickly realize, everyone realizes, when you meet them that [famous] people are human beings, and they’re nice or they’re not. And they [Rogen and Goldberg] are lovely. And they’re very generous.

AX: Although you do many other types of projects, you have done a decent amount of science fiction, fantasy and horror roles. Is this a genre you particularly like, or is this just where a lot of the work has been?

NEGGA: It was never my intention, it just happens to be the work that I’ve gotten, but I feel very privileged and lucky to be part of it. It’s work that I love doing, and I love the world, and I love the fans. They’re the most loyal fans in the world. When they’re very happy, they’re very happy, but they certainly let you know when they’re not [laughs]. That’s passion.

AX: Did you read comics while you were growing up?

NEGGA: Yeah. I wasn’t an avid fan, but I grew up with a lot of older boy cousins. I grew up with a lot of boys when I was a kid, and just that kind of idea that I can do anything they can do. There were always comics lying around, and so when I read the PREACHER comics this time round, there were echoes, like they were very familiar to me. I loved them. I quite like their boldness, in both senses of the word.

AX: Tulip is a very bold character. Do you think she’s on her own, or is she part of a change in how we see female leads?

NEGGA: I think something is happening. I think that we’re moving forward at a quicker pace than we ever have done, and it’s undeniable and it’s unstoppable. And I’m very excited. It’s sort of unacceptable now to have female characters who aren’t complex and contradictory, like men have been on the screen for eons. I was watching ADAM’S RIB, with Katharine Hepburn and Spencer Tracy, and I remember thinking, “It’s happened before and something stopped it.” And I think maybe this is our second go-round, and it will continue unabashedly and unashamedly.

This interview was conducted during AMC’s portion of the Television Critics Association press tour.