The actor talks about his new science-fiction series 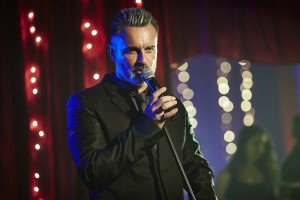 Actor Julian McMahon is no stranger to the science-fiction/fantasy/horror genre. He costarred as the demonic Cole in multiple seasons of CHARMED, played Dr. Doom in the 2005 and 2007 FANTASTIC FOUR films, appeared in BAIT (Great White sharks terrorizing a submerged supermarket) and also starred in the 2003-2010 run of NIP/TUCK (not technically genre, but often surreal).

ASSIGNMENT X: Was it fun to be working back in Australia?

JULIAN McMAHON: It was really fun. I haven’t lived in Australia for a very long time, and it was really nice to go back home, so to speak.

AX: How long was the prosthetics process when you were in your full alien look?

McMAHON: We did a few that were about six to eight hours, and then, one of the prosthetics we developed over a month, and then it took about four hours to apply and maintenance and all that.

McMAHON: Yeah. I definitely found myself uncomfortable at points in time in this piece. [But] I think [discomfort is] what it’s all about. I mean, that’s the whole piece is, who are we, what are we doing, why are we making those choices?

AX: You mean, in terms of both the human government and the aliens’ approach to what they ought to do about each other? Neither side is completely good or bad …

AX: And what would you most like people to know about HUNTERS?

McMAHON: I think that it’s a multifaceted show. I really think it’s about humanity, it’s about facing our fears, facing each other, it’s about why we stick up for what we stick up for, what our belief system is and what it means, and it challenges all of those thoughts.