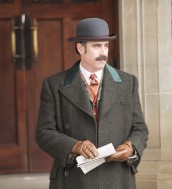 The actor talks playing the creator of Sherlock Holmes 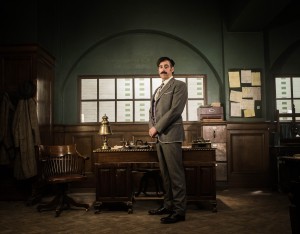 English actor Stephen Mangan is perhaps best known in the U.S. for playing discomfited television writer Sean Lincoln in Showtime’s comedy EPISODES. Now Mangan (whose other credits include a Tony-nominated performance in a revival of THE NORMAN CONQUESTS, the title role in the TV version of DIRK GENTLY and the grown-up hero of ADRIAN MOLE: THE CAPPUCCINO YEARS) is heading up a different TV series, playing another writer.

ASSIGNMENT X: How did you work out the schedule for HOUDINI & DOYLE, which shot in England and Toronto, and EPISODES?

STEPHEN MANGAN: Well, actually, that worked out very well, because EPISODES films infrequently. EPISODES, we [started shooting Season 5] in April, and if HOUDINI & DOYLE happens again, it will be October, so everyone was very grown-up about it, and it worked out well.

AX: Were you interested in Arthur Conan Doyle or Sherlock or Houdini before you became involved with the show?

MANGAN: To be brutally honest, no. I’d never read any Sherlock Holmes, I hadn’t watched any of the movies, I hadn’t seen the Benedict Cumberbatch series, to my shame. But I’ve since read a lot of the books and become a fan.

AX: Are you just not a mystery guy overall?

MANGAN: No. I don’t really watch mystery stuff, I don’t watch procedurals, I don’t watch cop shows, I don’t watch detective shows. So this is a real departure for me. To be honest, I don’t watch a great deal of television. I don’t watch as much as I probably should, as it is the business in which I make my living. You know what it’s like when you’re building and you’re busy late into the night. I go to the theatre a lot, and I have two very young children, so by eight o’clock, I’m normally falling into my bed.

AX: Where did you go to research Doyle, and what did you learn that was helpful?

MANGAN: Well, I went to the usual sources, I looked online. I didn’t read any autobiographies. I watched a couple of clips of him speaking, but he doesn’t look much like me, he doesn’t sound like me, and really, when you do a show like this, because he’s not familiar to most people, the way he looked and sounded – if I was playing David Hasselhoff, it would be a different story [laughs]. In a way, the historical character of Doyle is probably the flat board for the writers to spring off of. My job, as I see it, is to play the script. And really, the Arthur Conan Doyle of the script is a new construct.

AX: Did you and Michael Weston go out for a drink to get to know each other before he started playing Houdini to your Doyle, or did you consciously feel that you shouldn’t meet up before you began working together?

MANGAN: Well, that was interesting, because Michael was cast not long before we started shooting. He was doing a play, here in L.A. So he had to dash straight home and finish the play – in fact, I think he had to miss the last week of performances – and then rush out just in time to start the show. So we did do a bit of rehearsing, but we really got together as the show went on.

AX: Did you find out anything about either the characters or the period that particularly surprised you and/or changed your point of view about anything?

AX: Have you done a lot of dramatic roles in this vein? Do you go back and forth between comedy and drama, because here we mainly know you from EPISODES …

MANGAN: Sure. And I think in the U.K.. on television, I’m mainly known for doing comedy. But a lot of the good comedy, EPISODES included, has deeper elements to it. And I’ve done a lot of drama on stage, a lot of Shakespeare. I was in [the feature film racing drama] RUSH, that was a dramatic part. I ran the team that James Hunt [played by Chris Hemsworth\ raced for, the McClaren team. I don’t see myself as a comic actor, I just see myself as an actor.

AX: Is this the longest you’ve spent shooting something as a main character?

AX: Did you have to learn how to do anything to play Doyle?

MANGAN: I had to learn how to drive a ridiculously old car. I mean, that car was astonishing, a 1904 Wolseley. It’s uncontrollable. Poor Michael was sitting next to me in the passenger seat, and I was careering all over the place. I nearly hit a couple of horses. It was pandemonium, but I got away with it.

This interview was conducted during Fox Network’s portion of the Television Critics Association Tour.