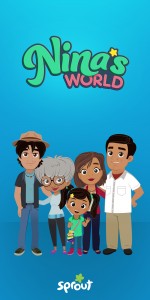 Michele Lepe has spent the past nine years playing Nina on Sprout Network’s live-action THE GOOD NIGHT SHOW, helping youngsters get ready to go to sleep. Now the actress is executive-producing Sprout’s animated spin-off, NINA’S WORLD, which presents the title character as a little girl exploring her neighborhood. Lepe voices Nina’s Mami, with Rita Moreno voicing Nina’s abuelita (grandmother). NINA’S WORLD plays on Sprout throughout the week and can also be found on the network’s website and on demand platforms.

ASSIGNMENT X: What age range is NINA’S WORLD for?

MICHELE LEPE: I would say two to six, and that’s pretty much Sprout’s age range, too.

LEPE: My heart is in acting. I’m an actor, a hundred percent, and I see writing and producing and participating behind the scenes as the icing on the cake. It’s really lovely to have an opportunity to give input into a show, and especially this one. I’ve played Nina on THE GOOD NIGHT SHOW for nine years, and to see the show, the character evolve, has been wonderful, and to be able to participate in that evolution is like I said, it’s icing on the cake. It’s a privilege.

AX: Nina is a little girl in NINA’S WORLD, but it’s still contemporary?

LEPE: It’s contemporary. I would say it’s a re-imagination of the character. It’s like we took a step back and we said, “Our audience really responds to Nina, they’re really loving THE GOOD NIGHT SHOW.” A lot of what we do is focusing on the child at home, their experience with Sprout, and we said, “What if we took a look at what Nina was like when she was the age of our audience, when she was a little girl? And we can use that sort of as a springboard to see, well, Nina on THE GOOD NIGHT SHOW knows sign language and she speaks English and Spanish and she does stretches every night. Why is it that she does those things? Well, we look back at the little girl, and we learn – her grandmother loves yoga, she has a neighbor who was deaf and taught her sign language, her parents were from Mexico, so she spoke both Spanish and English.” So for real fans of THE GOOD NIGHT SHOW, who see all of these things every night that they love, they’re going to get a whole different appreciation of it from NINA’S WORLD, because they’re going to learn how it is that Nina the little girl learned all of these things.

AX: You’re from San Antonio, Texas. Are any of your real-life childhood experiences there reflected in NINA’S WORLD?

LEPE: Like I was saying, it’s a privilege and an honor to be able to participate in the development of the show, and we focus on trying to create an authentic child, an authentic family, and an authentic neighborhood. So we had to bring in real-life experiences. And when the show was being developed, I brought in my stories from growing up in San Antonio. I brought pictures of me as a little girl at the Battle of Flowers Parade, or all of these lovely experiences that you only have growing up in San Antonio, but so did the rest of the production team, so it wasn’t just about, “Let’s recreate San Antonio,” but it was important to bring an authentic flavor to the show.

AX: What’s THE GOOD NIGHT SHOW like, with you playing Nina as a young woman?

LEPE: THE GOODNIGHT SHOW is live-action. So it’s me and I’m accompanied by Star, which is a large puppet, and we sit on a couch, and we’re sort of in this imaginary world where Star and I talk to the children at home, and we really focus on getting ready for bed at night. And so we try to model a nighttime routine for kids at home. We sing songs, we tell stories, we do little relaxing stretches, take deep breaths and relax every night, we make a nighttime wish every night, and it’s all about winding down at the end of the day.

AX: How old is Nina on NINA’S WORLD?

LEPE: Nina is six. Actually, we celebrate her sixth birthday in one of the episodes. So she’s five, turning six.

AX: What would you most like people to know about NINA’S WORLD?

LEPE: I would like everyone to know that NINA’S WORLD is about a real little girl, having real experiences. It’s a lot of fun, and we’re trying to reflect what kids today are living.