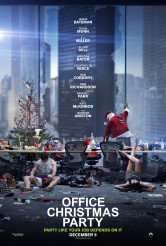 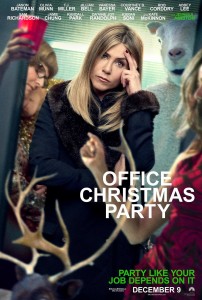 The title event isn’t supposed to happen this year at the Chicago branch of multinational tech company Zenotech. This is because interim CEO Carol Vanstone (Jennifer Aniston) has turned up to literally and figuratively wrestle her eager but inept brother Clay (T.J. Miller) into shaping up  his office. Carol insists on sweeping personnel cuts, and when Clay and his bestie, branch manager Josh Parker (Jason Bateman), try to talk her down, Carol decides she’s closing the Chicago office altogether. In desperation, Josh, Clay and tech whiz Tracey Hughes (Olivia Munn) promise to bring in $12 million worth of business from executive Walter Davis (Courtney B. Vance). In the hopes of getting Walter to sign, Clay throws an epic Christmas party in the office building, which gets even wilder than was planned.

There are the expected sorts of jokes and moments of predictable warmth. Once certain plot lines are set in motion, we can easily guess how they’ll turn out, but that’s just as well – OFFICE CHRISTMAS PARTY isn’t set up to earn any tragedy, and part of its appeal is in its overall lack of mean-spiritedness. Most of the characters, even the weird ones, turn out to have useful attributes and care about each other in the end.

The big comedy moments are in the unexpected bits that don’t really affect the plot but provide riffs of insanity. Reactions will depend in part on exactly what kind of sight gags the viewer finds funny, but the desire and ability to achieve outrageousness is demonstrably high. The office party itself turns into something that bars almost no holds (though, blessedly, there are no rape jokes), even though the narrative wanders out of the building.

Bateman as the relative straight man is his usual good guy self, and Munn plays just distracted enough to make us believe that her character might possess technical brilliance as advertised. Aniston is in great shape and stays on her character’s side, which helps carry her through the film. Vance throws himself into the spirit of the occasion with gusto. Miller’s Clay has advantages and power, but he’s still not a million miles away from the actor’s SILICON VALLEY character Bachman, ready to chase his own ideas wherever they lead him. Miller doesn’t play Clay as the sweet man-child that the script broadly calls for. Instead, he’s on the fine line between fun fellow and monster, becoming one of the movie’s best-realized notions.