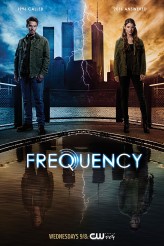 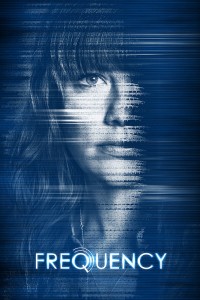 In The CW’s drama FREQUENCY, New York City police detective Raimy Sullivan (Peyton List) discovers that an old ham radio enables her to talk in the present to her father Frank Sullivan (Riley Smith) in 1996. Frank was murdered. Via the radio, Raimy is able to help Frank save his own life, but this causes changes in the timeline that greatly affect the present.

FREQUENCY was originally a feature film, released in 2000, with Jim Caviezel as the son in the present (the gender was changed for the TV series) and Dennis Quaid as his dad. Jeremy Carver (who was one of the adapters of BEING HUMAN for Syfy and served as exec producer/show runner for the past several seasons of SUPERNATURAL) adapted FREQUENCY for television and serves as an executive producer. Dan Lin, whose feature credits include the Robert Downey Jr. SHERLOCK HOLMES franchise, is a fellow executive producer on the series.

ASSIGNMENT X: Did working on SUPERNATURAL and BEING HUMAN, with all of the flashbacks and time travel, give you some help in forming FREQUENCY?

JEREMY CARVER: I think probably a little bit of everything you do does that, right? I mean, hopefully, you’re accumulating little tricks and knowledge along the way that help you tell a better story. So absolutely. I think everything I’ve done up to this point has contributed to FREQUENCY.

AX: But specifically, in terms of aging characters up and down and changing sets around that are still standing sets that need to be different in different timelines?

AX: Were you looking for actors who could play in multiple timelines? I mean, did you say something along the lines of, “Would you mind getting into this makeup so we can see how you do here?”

CARVER: We didn’t put them in makeup for auditions, but we did look for people across the board who had a certain weight, in that they could carry themselves as a younger person and an older person. That was very important to us. So it was never far from our minds, those actors who would be playing two eras.

AX: Was Peyton List a CW suggestion? She’s been on a lot of CW shows.

DAN LIN: It was actually a team effort. Peyton actually worked on a show called BIG SHOTS with Jen, our fellow e.p. We had been fans of hers from THE FLASH. Obviously, The CW and Warner Brothers had worked with her before, so all of us had known Peyton and been excited to have her. And also, the same with Riley. Riley is someone who hasn’t had his starring role yet. We really believe he’s a leading man. This gives him an opportunity to do that. A lot of us have worked together before.

AX: In terms of genre, how would you describe FREQUENCY?

CARVER: I actually thought Anthony [Ruivivar, who plays Stan Moreno] put it really nicely, as a kitchen-sink drama, wrapped in a genre bow. There’s a very strong drama element to it. That said, we definitely have fun with the cross-time nature of the show. We don’t shy away from it in terms of challenging our viewers from a genre standpoint, and as the season goes deeper, we start to delve into more theories about why this may be happening and how to interpret what’s going on from a genre standpoint. So why I think it’s the character drama that is at the heart of this, we’re certainly not turning away from the genre. It just happens to be that we’re doing a very grounded drama, seen through the eyes of very grounded individuals who don’t have any genre experience [laughs].

CARVER: There are significant ones in each episode. But it’s not big in the sense of suddenly there’s a new world power. It’s significant to our characters. I think you have a father and daughter who are learning as they go here. And they’re making mistakes, and they’re not quite sure how all this works. So we’re watching them make mistakes and live with the consequences and figure out how to now conduct themselves, based on what they know of how this whole time thing works.

AX: Are there any little pop culture Butterfly Effects for humor?

CARVER: There are definitely pop culture references between our different eras.

AX: With FREQUENCY, just to be clear and have it from you – nobody travels through time in a manner that normal people do not. Everybody is traveling at the same rate – there’s no actual time travel?

LIN: There’s one more executive producer, who’s Toby Emmerich, who runs New Line, and who wrote the original movie. He couldn’t be here today; he’s running a studio. John Rickard is our conduit to Toby, so part of his role is to be like a creative touch point with the original creator. Toby’s watched all of the cuts, has been very involved in the development of the script and the casting. Our show is very different from the original movie, obviously, with the gender change, but still, there are touch points you want to keep consistent, themes of second chances, icons of the magical ham radio. And also, because it’s time travel, it gets really complicated. Toby, having written the feature, has already thought a lot of things through [regarding] the Butterfly Effect, so he really plays almost like a sounding board for Jeremy. Toby’s said, “I’ve actually run into some of those walls before, and here are some things that you should avoid.”

Jen, my fellow executive producer, she runs my TV company, she’s on set day to day, and really Jeremy’s right-hand person. She’s very instrumental in the music choices of the show, very instrumental in the costume design, and really his right-hand. For me, I’m just trying to play a peripheral role in putting this whole thing together, making sure that everyone’s communicating with everyone else, making sure that everyone’s playing the role that they best are suited for, and also being a facilitator with the network, both in the production deal and the marketing of the show.

AX: Were there things that Toby Emmerich felt were absolutely essential to keep?

LIN: Yes. Obviously, the magical ham radio was essential. He was very open to the gender change. You might not know that the first time this was set up, it was set up at NBC, and it was actually father/son then. And when we brought it to The CW, we changed it to father/daughter and he was very much accepting of that, and talked us through what the flow-through effects of that would be.

AX: Was that internally from you guys, or did The CW say, “You know, we have a fair amount of women watching our channel, can you make it a daughter?”

LIN: No, they never actually dictated anything. It was purely internal to us. “Okay, who are the fans that we’re trying to appeal to?” Jeremy obviously had a lot of experience with SUPERNATURAL, but it really came from us. “Okay, this is the way to make this show.” We made it younger, hipper, and gave it a female spin.

AX: How is shooting in Vancouver?

CARVER: Vancouver is a terrific place to film, and I think one of the challenges of making Vancouver [appear to be] New York City, but we’ve been very successful so far. We also shot part of the pilot in New York City. Moving forward, we’ll be shooting the show, some of it, select moments, in New York City as well, so altogether, I think it works pretty convincingly.

LIN: It allows you to sort of keep costs down, because you can shoot it as any city, and then do pickups in the actual city. And the crews are terrific in Vancouver, so it’s a very production-friendly city.

AX: What would you most like people to know about FREQUENCY?

CARVER: I think at its heart that it’s a very soulful and provocative drama, which happens to be one part family drama, one part crime drama and then one part genre. And for folks who like their sci-fi very grounded, very relatable, not overburdened with a rule structure, and something very relatable. I think everyone wishes they could have a second chance with someone they love, and this show gives our main characters a second chance, just not in the way they may have expected it.

LIN: It will surprise you with the emotion and heart. I was surprised, when I watched it, even though I’d read all the scripts and watched all the filming, that I got teary-eyed at times. So I think people will be surprised by the really interesting action in the show, there’s a lot of emotion, it’s not always serious, there’s a sense of humor in the show as well. I think there’s something for everyone.