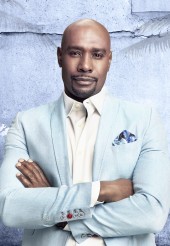 The star and creator talk love and death in Miami 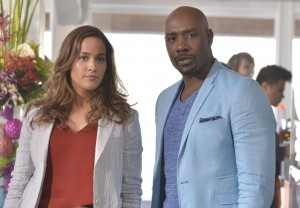 In Fox Network’s ROSEWOOD, returning Friday, Jan. 6 at 8 PM in its second season, Morris Chestnut plays the title character. Dr. Beaumont “Rosie” Rosewood Jr. is the most unconventional yet perceptive pathologist in Miami. Police detective Annalise Villa (Jaina Lee Ortiz) is more traditional, but often relies on Rosie’s expertise to solve cases. There’s an element of attraction there as well, and Rosie isn’t going to let his heart condition get in the way of love, work or danger

ROSEWOOD creator Todd Harthan (who wrote the feature film GRAVY and was a writer/producer on DOMINION, PSYCH and CRASH) is hanging out with leading man Chestnut at Fox’s party for the Television Critics Association. Chestnut first gained notice in 1991’s BOYZ N THE HOOD and has since anchored the hit BEST MAN comedy feature franchise and recently been a regular on NURSE JACKIE and LEGENDS. Both men are happy to talk about the rosy aspects of playing with love and death in Miami.

ASSIGNMENT X: Rosie has his fair share of both physical conflict and romance. In Season 2, are we going to have the same emphasis on Rosie’s heart condition, or is that going to be a little bit less, or a little bit more?

TODD HARTHAN: We rest the heart condition and the health issues the first half of the season, and then there’s an event in the middle part of the season that kind of brings it back to the forefront.

AX: When you conceived of a hero with this physical issue, did that do for you what you were expecting it to do narratively, or did it start bringing up things that surprised you?

HARTHAN: Both. It surprised us, and it was interesting to write to sometimes, because obviously, Morris is in incredibly good shape, and then you give him all these ailments that in theory make him weaker. It was something that we liked to play with in the writers’ room, and hopefully, it’s something our audience can relate to as well, which is that, just because you are dealt this hand of cards doesn’t mean you can’t still be strong and macho and virile, which Rosewood obviously is.

AX: Has ROSEWOOD developed the way you expected it to? It’s like a combination of CSI and a private eye show, where they pair a very cerebral person with a very live-in-the-moment person.

MORRIS CHESTNUT: [laughs] Yeah, I think Todd’s been great at finding a unique voice and a unique vision for the show, and we’ve just been going with it.

AX: You’ve done television before, but how does it feel to anchor a show?

AX: As the lead, do you feel a responsibility to set the tone on the set?

CHESTNUT: Without a doubt. The lead of the show, the lead of a movie, definitely sets the tone of the entire set, so yes.

CHESTNUT: Well, thanks. [indicates Harthan] He threatens to fire me every week, so … [laughs].

HARTHAN: [laughs] Oh, I know, because he’s replaceable, right? There are a lot of faces that look like that in the world.

AX: Did either of you have to learn anything in order to do the show to begin with, or to keep the show running once it was up?

CHESTNUT: I learn on each episode. There are a lot of long words I learn each episode. It would be hard for me to take a crash course. I never know what they’re going to throw at me.

AX: What about dissecting corpses? Did you have to learn about that?

CHESTNUT: We actually have a coroner on set, a technical advisor on every episode.

AX: Are you good at that sort of thing normally?

CHESTNUT: [laughs] No, no. Dissecting organs, no.

AX: What would you most like people to know about Season 2?

HARTHAN: We’re trying to go bigger and bolder and more explosive in both our cases and our personal stories. We want to upgrade from Season 1 and take bigger swings, and we’re doing it in both the storytelling with our cast, and with our cases.