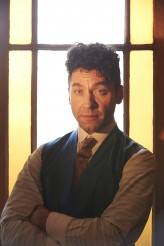 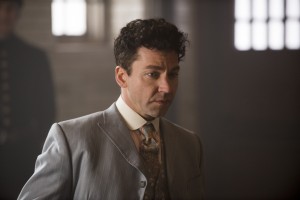 Michael Weston plays the legendary escape artist Harry Houdini in Fox Network’s HOUDINI & DOYLE, which has its first-season finale Monday at 9 PM. In reality, as in the show, Houdini was friends for a time with Sherlock Holmes creator Sir Arthur Conan Doyle, played by Stephen Mangan. Also as in reality, the two clashed over their belief in the supernatural, with Doyle a believer and Houdini a skeptic. HOUDINI & DOYLE, created by David Titcher, does imagine that the two men, together with London police constable Adelaide Stratton (Rebecca Liddiard), investigating very uncommon crimes.

Weston, a native New Yorker, has a lengthy career in films and TV, including roles in HART’S WAR, GAMER and the recent GRAVY, and arcs on SIX FEET UNDER, SCRUBS, HOUSE (executive-produced by future HOUDINI & DOYLE producers David Shore and David Hoselton), LAW & ORDER: SVU and THOSE WHO KILL.

MICHAEL WESTON: It’s funny. I knew Jeffrey Donovan for years and years and years. We had a constant joke on set, but it was great. I loved doing that, and it was fun.

AX: Between BURN NOTICE and a couple of your other roles, playing a slightly smartass character in a period comedy/drama/mystery seems like it’s in your wheelhouse …

WESTON: Yeah. The character is so much fun, and he lives somewhere in this very comic [realm] – he’s a showman, but he’s also a real detective in terms of what we’re doing, and it’s this great blend of comedy and real drama and personal stories that evolve as the series goes on.

AX: How much did you know about the real Houdini, or the real Doyle, or the 1901 time period, before becoming involved with the series?

WESTON: I had a basic working knowledge of Houdini and Doyle. I didn’t know that they were friends, and I didn’t know that they fought so rigorously over this spiritualist thing, and I didn’t even know that the spiritualist movement was almost like a political party, it was this intense movement that took the world over for a hundred years. There were millions of people involved in it. To see where Houdini lived inspired our own sense of wonder and our own imagination. It was a real privilege to play this character, because I feel like so many people have come up to me and said, “I love Houdini,” or “I love Doyle,” because these guys have meant something to them in their lives, so it’s great to have that as a foundation to start from. It’s a great place to start working from.

AX: What did you have to learn in order to play Houdini?

WESTON: Well, I had a ton of magic that I had to learn. I can’t pretend that I’m any kind of magician yet, but it inspired me to go to the Magic Castle and get my s*** together. And then, I’ve learned a lot just about the historical time, the period, and what people had to go through at that time, and how pertinent that time was, actually, to the time we’re living in now, and how much we need that sense of wonder in our lives that these people had, that sort of naïveté, [which] lends itself to discovery and exploration, and so I feel like that’s a great place to start with these two characters who have a lot of questions to answer in their lives.

AX: Do you know how to do anything from before, like play guitar or type, that’s been helpful with Houdini’s sleight of hand magic tricks?

WESTON: No. I played baseball. That’s about as good as it got for me. I played piano, and actually, a magician told me, if you play piano, it’ll help you learn a bunch of these tricks. But you still have to sit with a deck of cards, seven to fourteen hours a day, and dedicate yourself. If we get a second season, I’ll do it.

AX: You also had to deal with a lot of prosthetics in the “Manus Dei” episode, when Houdini became ill …

WESTON: A lot of boils and stuff. The thing I hate most as an actor is prosthetics. The Kryptonite to my acting career is having to sit down and do a lot of prosthetics, but we had such talented makeup artists, and they did such a good job with it, that it was fascinating to see them do it. And I think it all looks really great, and so in the end, it was worth it. But I do hate sitting in the chair that long.

AX: What is Houdini’s attitude towards his mother? Is it just unconditional devotion?

WESTON: It’s a little bit spooky. It sort of borders on inappropriate [laughs].

WESTON: Yeah, it’s a little bit like, “Mommy …” But I think the reality is, this guy came from nothing and he lost his father early, and one of his brothers, and his mom was his rock. She was the person that believed in him, and maybe one of his best friends in his life, and so she was it for him, and she was the only woman that he was totally comfortable giving over to, until maybe he found someone else, and I think that plays really well into the romantic ideas of the series.

WESTON: I think he sees her almost like a little sister. I think he’s very cavalier about the opposite sex when we meet him. He’s used to being a celebrity and getting what he wants. And suddenly he’s met with this woman who can stand on her own two legs and actually say “no” to him. And he can’t believe it, but he also accepts the challenge, and I think he likes it. And I think he learns a lot through his interaction with her. He becomes a deeper, better, bigger man, and actually finds a friend who’s a woman. And there’s maybe a burgeoning romance there, but we don’t know yet.

AX: It’s also shown that Houdini is obviously dealing with a lot of physical pain. How much do you keep that in mind in your performance?

WESTON: To me, he covered that stuff so much, he never let anyone know that he was in pain, ever. So we see little things of it when we’re alone with him, but when he was around other people, he was a showman. He was the life of the party, and he made sure to make his imprint with that.

AX: So you don’t have to think, “I should move in a certain way to play him”?

WESTON: Even as I did it, I remember one of our directors, Daniel O’Hara, and I sat down, on the third [episode], and we were like, “He’s not going to let anyone know that he’s in pain.” He’s like some of these great athletes who are riddled with injuries, and yet they’ll play a game, again and again and again, and you’re like, “What? You have three broken fingers and a bad back,” and they’re like, “Yeah, I’ve had that for twenty years of my career, but I’ve played every game.” And I think that’s how he is.

AX: And how much can Houdini let Doyle see that he likes him, or when he does do that, is it completely accidental?

WESTON: I think he’s way more open to liking Doyle than Doyle is to liking him, but I think in a very surface-y way. And I think when it gets to intimacy, he’s terrified. And I think that the deeper their relationship grows with him, and the deeper his relationship grows with Adelaide, it’s when people actually see him, he’s an illusionist. He never lets anyone see who he really is, and I think that the moments where you get to actually see him, those are the moments that are the most revealing about those relationships.

WESTON: That it’s an incredible friendship, competitive and fraught with frustration, but it’s fun and silly and it’s a great adventure. And I think is a lot of fun.

This interview was conducted during Fox Network’s party for the most recent Television Critics Association press tour.