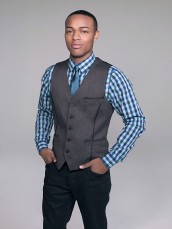 The actor/rapper talks playing a hacker working for the Feds 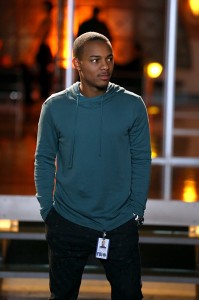 In CSI: CYBER, now in its second season on CBS Sunday nights at 10 PM, Shad Moss plays Brody “Baby Face” Nelson. Nelson is a former “black hat” computer hacker whose skills have gotten him recruited to work for the FBI, under the command of Cyber Crimes division leader Avery Ryan (Patricia Arquette).

Moss has a little in common with his character, in that they both started young and were doing something else before their current jobs, though Moss’ real past is far more benign. Under the name Bow Wow (starting out as Lil’ Bow Wow), he was a best-selling rap music artist. He’s also played guest roles on a number of TV series and acted in feature films including THE FAST AND THE FURIOUS: TOKYO DRIFT and FURIOUS 7, but CSI: CYBER is Moss’ first series regular gig.

ASSIGNMENT X: When you started CSI: CYBER in 2015, you were twenty-seven, going on twenty-eight. How old was Nelson supposed to be?

SHAD MOSS: Nelson was supposed to be nineteen.

MOSS: A younger person? Not really, because once I shave, I already look naturally sixteen anyway [laughs], so it’s believable. But I think that’s what was so important, that’s why you’re hearing me talk about the importance and the power of youth, and just the power that youth has, dominating whether it’s music, downloads, the video-gaming, it’s the youth that continues to make the world move and shift. So the writers and of the producers definitely want to make sure that, when the people tune in, when you see the black hat hacker, you see yourself. And I think that’s what bridges the gap, and this just makes this whole show so effective and so relevant, and when people watch it, they’ll definitely be able to see a lot of similarities between themselves and the characters.

AX: In real life, you’ve been working since you were Nelson’s age …

MOSS: Younger. Since five. Discovered by Snoop Dogg at five. Did my first movie, LIKE MIKE, at twelve, with Fox, and then after that, it was just going and going. And it hasn’t stopped yet.

AX: Were you a fan of the original CSI, which spun off CSI: CYBER?

MOSS: What’s so crazy is, yes. And when I got the call, it was so crazy, because I was getting ready to do a movie with [director] Antoine Fuqua, SOUTHPAW, the boxing movie, and because of my schedule with TV at the time – I was hosting the show [106 & PARK] for BET, I couldn’t do it. I get a call from Anthony [E. Zuiker, who created the original CSI and co-created CSI: CYBER with fellow executive producers Ann Donahue and Carol Mendelsohn], and my mama, Mama’s like, “You’ve got to go on tape, they want you.” I’m like, “Who?” “CSI.” “Mama, stop playing. Is this serious? Is this for real?” And then when I got on the phone with Anthony, and he told me what they needed, I did my audition tape while I was actually filming my other show. I took five minutes to do it real quick and sent it in and Anthony called me back in twenty minutes to say, “We’re booking your flight,” and that was it.

AX: How are you balancing music and acting?

MOSS: Music is always going to be my first love. I’m blessed and fortunate enough to have done great in that career and for that to have opened up a lot of doors for myself. Prior to me doing this, I was doing BET, hosting 106 & PARK, and flying out here. My schedule was crazy, from New York to L.A., L.A. to New York, and working with CBS and BET and them being in cahoots with each other so I can work out my hectic schedule to do both at the same time. God is good. And then you move from that to CBS, America’s Number One most-watched network, it’s like, you get no bigger than that.

AX: You had a little rapping, rhyming dialogue early on in CSI: CYBER, which seemed like a little nod to your musical career. How did that come about?

MOSS: [laughs] You know what’s so crazy? Just so you guys know, Anthony is a hip-hop head. Anthony’s always texting me about Soul Train and the Soul Train lines and just different things like that. So when we did this part, I just was thinking as if I was Anthony. I think he did this on purpose, threw a rap in there because he knows I rap. But it was smooth. We found that part to be very, very funny. [But] that’s the only thing that you’ll really see me saying anything about rhyme or playing into anything Bow Wow-ish. I think that’s pretty much it.

AX: You’ve done a lot of acting gigs before. Apart from being a series regular, which means there’s more of it, is there something different about CSI: CYBER?

MOSS: I tell people all the time, when you do this caliber of acting, this is different. I never experienced this type of caliber of acting. The stuff that I’ve done [has mostly been] fun, light-hearted stuff, comedy, whereas you come into this, this is like Harvard. The tech talk is crazy, our monologues are crazy, this is unlike everything you’ve ever seen before. It’s tough. And I think once you do stuff like this, the sky is the limit. You can pretty much do anything. I used to be a little nervous to go in audition rooms. Now, it’s like I feel invincible. If you can do this, you can do anything [laughs].

AX: Do you view success the same way you did when you started out, or when you were nineteen?

MOSS: Definitely not. I think when I was a kid, gaining success, I was still being a kid. I think that was more important to me. I really didn’t understand the business – selling three million albums, triple-platinum, I’m like, “Okay, whatever. I just want to ride this scooter, or I just want to go play basketball, I don’t really care.” Whereas now, I’ve been doing it so long that I just take everything that comes my way as a blessing, I don’t take it for granted, and I just coast with it. I’ve learned to be humble now, and accept all the blessings that come my way.