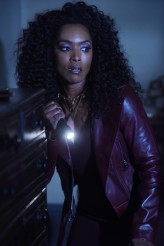 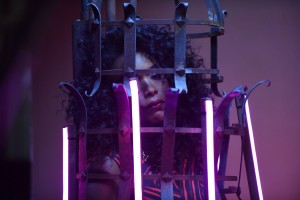 Answering questions during a Q&A session for AMERICAN HORROR STORY: HOTEL set up by FX for the Television Critics Association, Bassett, who earned an Oscar nomination for her starring role as Tina Turner in WHAT’S LOVE GOT TO DO WITH IT and who is currently on the big screen in Spike Lee’s CHI-RAQ, describes Ramona as “sexy, but not in a drug addict-y kind of way. My character is this fabulous actress of the day. I don’t live at the hotel, but I visit very often.”

Regarding returning to the same show, crew, cast and creative team (the series was created by Ryan Murphy and Brad Falchuk, with Tim Minear serving as their fellow executive producer) as different characters three years in a row, Bassett says, “It certainly has been like a rep[ertory theatre company]. It’s been one of the greatest joys to work with Kathy [Bates, who this season plays Ethel Darling], as well as everyone. Also, it was exactly Season 3, COVEN, that I was intrigued when I went in and met with Ryan and we began to talk about who the character was, and the scene, and leading up to who I was. And I said ‘Marie Laveau’ before he could say it, because I was just very intrigued with the city [New Orleans, where Season 3 took place] and that character. So it was a dream come true, and it’s been extraordinary to be able to enjoy that and to have another opportunity and again, another opportunity to play an equally fascinating character, and having the familiarity with [the other actors] also, to have that familiarity and to be able to lean on each of them. And then to meet new folk and work with them. It’s fresh, it’s new, it’s exciting. I mean, we’re actors, but it’s not as if you go into the same office for thirty years. We didn’t get into this for the stability. So I am thrilled beyond belief.”

When the session is over, Bassett engages in some informal discussion.

ASSIGNMENT X: Your husband Courtney B. Vance is also an actor. What does he think of AMERICAN HORROR STORY?

BASSETT: He enjoys it. He thinks it’s scary as hell, so I have to drag him in to look at it, but he’s very proud of me. And now he’s on AMERICAN CRIME STORY, so now he’s a part of the Ryan Murphy/Brad Falchuk family.

AX: What’s harder – working with physical challenges like an extra breast, or emotional challenges where you’re playing actions like like Marie Laveau being complicit in the killing of children?

BASSETT: I would say the three breasts, just the time constraints. I had three men working on them. You know, it was like, “Let me watch ORANGE IS THE NEW BLACK or something.” So I can forget that I have three men painting me [laughs]. [The prosthetic makeup artist’s] wife would put it on and then they would surround me.

[In terms of scenes involving children], I was thinking of the little boy who was hung up on the tree, [with Marie] not killing him, but avenging him. That was hard, watching that, just that image of that young boy hanging from a tree.

AX: Because that transcends fictional horror and speaks to real-life horror?

AX: What would you most like people to know about this season of AMERICAN HORROR STORY?

BASSETT: I think this season’s just going to be a fresh new hell [laughs], a fresh brand new hell. If you think you’re used to something, it’s going to satisfy tremendously, and it just gets bigger and bigger exponentially. So you think, “Oh, they [already] did it.” No, they’ve got some new stuff coming.