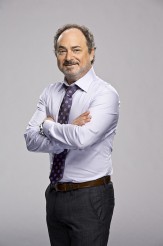 The actor talks his new comedy, doing stand-up and more 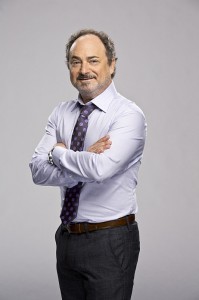 In CBS’ new Thursday night half-hour comedy ANGEL FROM HELL, Jane Lynch plays Amy, who could be, as she asserts, the heavenly guardian sent to watch over Allison, played by Maggie Lawson. Then again, Amy could simply be crazy.

ASSIGNMENT X: With everything going on in your work life, what made you decide to do ANGEL FROM HELL?

KEVIN POLLAK: This show represents an opportunity. The reason I was able to talk to it is, we all just want to work with great people, honestly. That’s all we want. So when I’m not being a standup comedian by myself, my hope and wish is that I work with such great people, it rises all boats. So this material was spectacular. And then the cast ramps it up. The whole thing is a dream, honestly.

AX: Well, it certainly looks like working with Jane Lynch would be a lot of fun.

POLLAK: And I know the other two’s [Lawson and fellow series regular Kyle Bornheimer] work, and they’re amazing, and I knew that.

AX: Does ANGEL FROM HELL creator Tad Quill let you punch up your own jokes?

POLLAK: Yeah. There’s a lot of freedom on the set. Quite frankly, it’s difficult for me to work without it. I mean, I have – certainly, A FEW GOOD MEN was a Broadway play where nothing changed. The words had to stay the same.

AX: What can you say about Marv beyond what he’s like when he’s dealing with Amy?

POLLAK: Well, he has his own needs and wants, again, as a Beverly Hills doctor. That says a number of things about his life and how he chooses to lead it. And it’s been a couple years since the passing of his wife, and he needs to get back out there, and I think there’s a lot of gold in them thar hills.

AX: And what is your documentary about?

POLLAK: It’s called MISERY LOVES COMEDY and it’s about, do you have to be miserable to be funny?

AX: Do you have an opinion on that?

POLLAK: Yes and no, depending on who you talk to. That’s why you have to see the documentary. I’m a glass half-filled guy, personally. But I also understand everyone’s individual take on the theory.

AX: Would you say that being Jewish has influenced your comedy?

POLLAK: Well, it still does. It was originally the family around the Passover table from the Old Country and from this. The characters and the yelling and screaming was hilarious, the uncontrollable anger and the fights between the brothers from the Old Country as they remembered stories and one would correct the other. So the character study stuff started to develop early, too. And then I was just fascinated with comedians that I saw.

POLLAK: Don Rickles comes to mind immediately, Alan King, eventually, of course, Lenny Bruce. Almost all of them, now that I think about it, in my youth. And also, I think at my bar mitzvah, the bar mitzvah boy reads from the Torah and then he has a speech. So in my speech, it was very important to me that I got seven applause breaks from laughter. I was writing specifically to my audience, and the first time I performed, it was in front of the relatives at Passover, doing an actual show, so I always sort of had the mentality and the emotional connection to being raised Jewish, what the family meant.

We were Reform, so we were practically Catholic, but that being said, to do Barry Levinson’s movie AVALON, which was sort of the beginning of my so-called dramatic acting career, was equally important and powerful.

AX: You’ve done a lot of both comedy and drama …

POLLAK: It makes me a real actor, if that’s a thing, in terms of diversity. One of the great things about being a character actor – one book I wrote was called HOW I SLEPT MY WAY TO THE MIDDLE, and you’ve heard it’s lonely at the top, I’m here to tell you it’s fantastic in the middle. Because you get to have a life, and I can also get the perks of show business, if I need a table at a restaurant. Because I’ve worked a lot with the giant movie stars. That’s not an enviable life, in any way, shape or form. [If you are a giant movie star], you give up too much, for me.

AX: Do you still get a thrill out of performing, or is performing right now what you do when you’re not directing?

POLLAK: It’ll still always be the greatest high to be on a stage, taking the audience for a ride of your choosing for an hour, where you can control the ebb and flow and the high. That sort of control doesn’t exist in life. I mean, I’m directing this movie, and my opinion has never mattered so much in a twelve- to fourteen-hour day, all day long. It’s one of the things I will teach people as I tour the country in a one-man show that I’m now threatening to do called SO YOU WANT TO BE A DIRECTOR. And I’m going to crush dreams and break hearts with the insights that I’ve already learned through pre-production and into shooting. So the creative outlet that that has become has been almost equal to the standup comedy all my life. Because as a standup performer, you’re the writer, director, the producer, the editor, the choreographer, the performer, you’re everything. And you live and die by your own wits. I think that’s one of the big, big parts of it. There’s no credit or blame that goes to anyone else.

AX: So that sort of combines the best of both.

POLLAK: It really does.

AX: You’ve also done several interview shows as an interviewer. Do you do that because it’s fun and you get to do some standup, or do you do that to learn about the people you’re interviewing?

POLLAK: I do that because I’m truly fascinated with people’s journeys. “How the hell did you get from there to here?” That’s the reason.

AX: And what would you most like people to know about ANGEL FROM HELL?

POLLAK: That it’s got a heart and it’s hilarious.