The actor talks bringing his grandmother to set 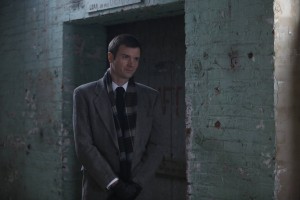 In Part 2 of our exclusive interview with Russia-born actor Costa Ronin, who plays Oleg Burov on FX’s THE AMERICANS, he talks further about the series and bringing his grandmother to the set, as well as his work on AGENT CARTER and EXTANT.

ASSIGNMENT X: You did an episode of AGENT CARTER earlier this year. How was it going from THE AMERICANS to that?

COSTA RONIN: It’s very different. It’s no different in the way of working, because I remember my first day on set of THE AMERICANS. The first time you go on the boards to do a show, you have this kind of tingling in the stomach, you have to breathe life into this character that hasn’t been seen before. AMERICANS started out in the Eighties. AGENT CARTER takes us to the Forties. So it’s a completely different world. AGENT CARTER, I’m in the pilot.

The thing that’s so amazing from a storytelling point of view [is] when you’re creating a different character without trying to be different. I enjoyed the show. It’s great; it’s a great show to watch as well.

AX: You’re also on EXTANT, which is set in the near future/present

RONIN: It’s funny, because I finished last season of THE AMERICANS and I jumped from [the Eighties] into the future to see futuristic car moves and space labs. Everything was different. It was a very brief gig for me, but it’s a terrific show. It was a great experience working on it. The crew was great as well, and it’s not often that you get to watch people like Halle Berry in a TV show, so it’s an amazing opportunity to watch her week after week.

AX: You were also on something called THE CIRCUIT …

RONIN: THE CIRCUIT was a TV show in Australia. In Australia, it’s a continent, but most of the land mass is not populated. So you have your major cities, then you have your [cattle ranches]. But a lot of the indigenous Australians live in the country. In those communities, they don’t have courthouses and police stations, and the legal system isn’t in place. The Circuit is the magistrate court that travels from one community to another to hear the court cases.

[THE CIRCUIT] ended up getting quite a few [Australian television] wins and nominations and it was a terrific show. It was shot in Kimberley, Australia. I don’t know if you can get the show over here, but it was an amazing experience, the stories that came out, the opportunity to the research about the communities of the aboriginal people and the tribes. Part of my research for the part in those days was, I went to a few of those court hearings in the community. And they don’t have courthouses. A lot of the time, the cases are being heard in a school hall or a gym. It’s just fascinating. I played a lawyer who comes in on the circuit and we see some of that through his eyes, somebody who is not part of that culture, who is not part of that world, who came here from the outside and experiences it firsthand as an outsider of what it’s like being in that community and being a lawyer, how it is to try those cases, how it is to represent somebody who is not part of [the establishment].

AX: THE AMERICANS shoots on the East Coast. So do you miss L.A. when you’re off shooting it?

RONIN: Yes and no. I think one of the things that I recently realized was I feel somehow strangely more comfortable living in hotels and out of suitcases than being at home. So I’m having this conversation with Dan Sackheim, a director/producer of [THE AMERICANS]. It’s like, if you’re comfortable, you’re at home anywhere you go, but then I don’t have a place that I’m eager to go back to, the place that I call home. You go to different places, you go to different countries, and you feel at home and connect with people who live there, but then you don’t have that feeling of, what is home? Is home where your parents are? I don’t know. It’s an interesting topic, because I think we’re part of this industry where a lot of the people who are not part of this country, not everybody’s got a home to go to, and they have a gypsy lifestyle and we kind of have to adapt – L.A. today, New York tomorrow and Toronto the day after and then London.

AX: I understand that you brought your grandmother to THE AMERICANS set for both Season 2 and Season 3. How did she like it?

RONIN: She loves me and I love her. I kind of grew up with her. She’s very far removed from this industry. For many, many years, my mom and my grandmother were, “So what is it exactly that you do?” They could not understand what it is I do and why I do it. She doesn’t speak English. She came [to the set], and everybody was so lovely and attentive to her, and she met Annet [Mahendru, who plays Nina] and Lev [Gorn, who plays Arkady], and Annet took care of her.

I think we were shooting a scene with Lev that day and she got to sit at the video village and watch us work. I remember coming around and I saw her sitting there with the director, she had headphones and everything – it was very special. It was something that was not a part of her life, it was not something she ever wanted to do or be a part of. I think she was just happy to see me do what I love. And then I think a story came out somewhere about the whole Lev in a suit thing, and it’s so true. She met Lev and he was in costume. My whole life, my grandma’s vision of me was always a job with a briefcase and a suit. And then she saw Lev, she turned around to me and she said, “Why can’t you go to work like that? Why do you have to wear jeans and a t-shirt?” [laughs] She didn’t realize it was a costume. Lev was walking around very important and gallant in his suit and I came to work that day in jeans and a jacket and all roughed up and my grandmother looked at him and looked at me, and I didn’t have the heart to tell her that it was a costume. She still doesn’t know it was a costume. But she loved Lev and she always asks about him. So it was an interesting experience.

RONIN: THE MIDNIGHTERS is a film that I did a couple of years ago, before THE AMERICANS. It’s a film that’s part of the love and passion of so many people. It’s still in post-production. I’m really excited about this one. The script, when I looked at it first, I think it was the same with all the cast members – we were fascinated by it. How is this script out there? Because some of them are not so good, but with this one, I’ve never read anything that fast, I was just so engrossed in the storyline. And everyone had the same experience. We were all comparing notes. It’s a story of a bank robbery, but it’s much more than that – the story is about love, it’s about friendship, it’s about the relationship between the father and the son, and it’s a very good story. I can’t wait to see it when it comes out. Julian Fort, who wrote and directed it, he’s so passionate about storytelling. I’m really excited to work with people like that, who don’t see just a job, but it’s a lifestyle, like there’s nothing else, this is what you do, is storytelling. If there’s a story, you go and you tell it – that’s all there is to it.

RONIN: I’m starting working on a film in a couple of weeks, which I’m really, really excited about. I can’t tell you anything about it right now, but it’s going to be a very, very cool thing, because I’ve never done anything like it before. [It deals with] religion and mysticism and old practices. Research was a huge, huge part of the preparation for the project, and it’s a blessing when you pick up a script and you get a job and there’s research to be done. You can’t just walk into a role. It’s fascinating when you can research it and then find that character, create that character and then find those energies and those characteristics of the character inside of yourself and bring it to life. It’s fascinating.

AX: On THE AMERICANS, do you wish that you got to have scenes with Matthew Rhys and Keri Russell, who play the main undercover KGB agents? So far, your characters haven’t interacted.

RONIN: Well, creatively, yes, absolutely, because they’re absolutely terrific artists and as human beings, absolutely golden. As the character, I don’t think he can. Being a legal spy at the Rezidentura, [Oleg] can’t have contact with the illegals, because that would blow their cover. There are two different types of spies. There are legals and illegals. The legals are basically everybody who works at the embassy, consulate. They are expected to be members of the KGB, because this is how you work, right? But then if somebody who is a known spy has a meeting with somebody who’s an average American, [that would raise suspicion]. Story-wise, I don’t think it’s possible, but then again, [creator/show runner] Joe [Weisberg] and [co-show runner] Joel [Fields] and the writing team that they have, they can do anything. It’s like being God. They can just create so many storylines and so many fascinating plots and twists and turns that no one has ever thought of. So I don’t know. AMERICANS is one of those shows where, just when you think something cannot be done, they do it.

AX: What would you most like people to know about THE AMERICANS right now?

RONIN: At this stage, everybody knows about the show. It’s such a well-received show. I hope the audience watches it, I hope they love it and I hope they continue to watch it, because it’s a fascinating period of time. I mean, there’s nothing like it. There was a time when two countries had the fate of the whole world in their hands. There was no other time in history when the lives of so many depended on the decisions of so few. So it’s fascinating. I think more people need to know about that time and more people need to watch that show and love those characters and feel for those characters and enjoy it.

The reason you watch the show is not because we are Team Soviet Union, we are Team USA. The spy craft and the Cold War and all that is the premise. You don’t watch the show for that. It’s not a history lesson. You watch the show because you connect with the characters. It’s a human story. It’s a story about love and about family and about relationships and how you deal with that. How does it feel waking up in the morning and going to kill someone or steal a secret and then come home and go to a barbeque at a family gathering at your friend’s place or talk with your friend and then deal with your troubled teenager? What is it like? And then the consequences of the decisions that these people make are huge. You and I make a mistake and it’s like, well, we pay for it. These people make a mistake, the consequences [affect] nations.