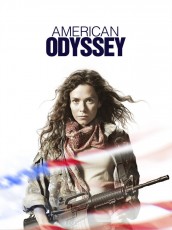 The executive producers talk about their new series 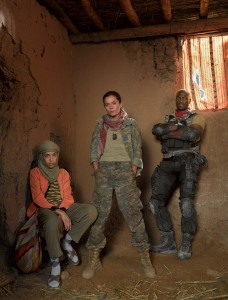 In NBC’s new drama AMERICAN ODYSSEY, Sundays at 10 PM, U.S. soldier Sgt. Odelle Ballard (Anna Friel) finds herself stranded behind enemy lines in Mali, Africa, after her squad is killed and she is left for dead by attackers who turn out to be U.S. military contractors. After Odelle  is declared dead but proof of her survival surfaces online, her husband Ron (Jim True-Frost), corporate lawyer Peter Decker (Peter Facinelli) and political reporter Harrison Walters (Jake Robinson) scramble to find out the truth and try to get Odelle home.

Adam Armus and Nora Kay Foster, whose joint writing/executive producing credits include THE FOLLOWING and HEROES, created AMERICAN ODYSSEY with pilot director Peter Horton. Armus and Foster serve as executive producers and show runners on ODYSSEY, which they discuss together.

ASSIGNMENT X:  Were you all working together, trying to come up with a premise, or did one of you come up with this and bring it to the other two, or how did this evolve?

NORA KAY FOSTER: Adam and I were pitched this idea by Simon Maxwell, who is with [production company] Red Arrow in London. He said, “What about if you do [the classical Homer’s] THE ODYSSEY?” And I said, “Well, that’s a great idea.” And Adam and I were a writing team and we took the idea to Peter Horton and asked if he wanted to work on it with us. So then the idea generated through the three of us.

FOSTER: Well, we started that way –

ADAM ARMUS: Obviously, all of us take on everything.

FOSTER: We try to take on as much as we can. It’s a three-person team. We have a writers’ room.

ARMUS: Yeah, we’ve had several writers’ rooms, actually. It’s been written over the course of months. And so we had one writer and then two writers and then three writers help us do all of it. But the way we write it is that basically we find different storylines that we write separately, and then we combine them all together, and then one of us takes the script and rewrites the whole thing and makes it one voice.

AX: What is the division of responsibilities between the producers?

FOSTER: Well, we actually have six producers on board. Some of them are non-writing producers, but Adam, I and Peter are the writing/producing team, so that we are all involved in travel and decision-making, and we really try to do it as a team.

FOSTER: We don’t specifically have a directing producer, but he does directing and producing, yes.

AX: You shoot in Morocco for your Mali scenes. How did you arrive at Mali for the place where the African action takes place?

FOSTER: We actually originally had set it in Pakistan, but that idea came to us because it was so recent [that] al-Qaida has been active in Mali.

ARMUS: Yeah. The truth there is that after all the activities in Afghanistan and Iraq, al-Qaida has moved. They’ve created new frontiers, and one of them was Mali, and so what we want to do is capture where al-Qaida and terrorism really is active in the present day, and that’s Northern Africa. And so for us, Mali was a no-brainer when we decided to switch it up and make it a little different than other shows you’ve seen.

AX: Wasn’t there a television show that had been shooting in Morocco and left to shoot somewhere else because they felt Morocco was unsafe?

FOSTER: I think they left other places to come to Morocco, because Morocco’s been pretty safe for awhile.

ARMUS: For us, Morocco has been nothing but a joy. It’s been safe, it’s been great, we started the pilot on the Algerian border, all the way in the desert, and now we’re filming in the city, in Marrakesh, and finding different places to shoot there. It’s been an adventure, it’s been great.

AX: Now, if Odelle is metaphorically Ulysses, who’s Penelope in the story, her husband Ron?

ARMUS: Yes, absolutely. In fact, there are storylines where the husband meets other widows – you know, the widows of the other soldiers.

FOSTER: She was traveling with a unit of all men. So the people that are home are all women, except for him. So he is mourning the unit with all the other women. And so that’s part of our story. Not a big part, there’s no love story there, but there is definitely the interest of other women.

AX: One of the things that has been in the news a lot over the last few years is the fact that local combat-area translators who help American troops are having a lot of trouble getting allowed to come to the U.S. Is that issue eventually going to be dealt with, in terms of Odelle’s new comrade Aslam, the young Mali character played by Omar Ghazaoui?

AX: Were you influenced visually by that famous National Geographic cover of the young Arabic girl with the arresting green eyes?

ARMUS: Some of that imagery is absolutely present in our show. It’s a lot of fun.

AX: Was there anyone in your cast where you were familiar with their work and you went, “I really want Anna Friel because of the way she was in PUSHING DAISIES,” or …?

FOSTER: Really, with all of them but Jake. He was new to us.

ARMUS: Yeah. Jake we didn’t know that well, but Peter Facinelli and Anna Friel we knew from NURSE JACKIE and PUSHING DAISIES and we’re fans of theirs, and when we learned that they were interested – Anna actually auditioned for us, which was fantastic, she blew it out of the water, and Peter is just fantastic, and Jake is great, too, so we’re really happy with our cast and we love them all.

AX: Are there any other shows out there that you’re looking at and thinking, “Well, they’re doing that, so let us do something different,” or are you just on your own trajectory completely?

FOSTER: I think our show is different enough and because it is about individuals and what we talked about that it is unlike most of the other shows, and so we don’t steer clear of things, we just go our own way.

ARMUS: The story is pretty apparent. Once you get into the series, you’ll understand what the story is, and it’s nothing like anything else that’s out there, so we don’t have to worry about it.

AX: As far as how each director works on his or her episodes, is it correct that you have a director who does the New York scenes for three episodes, then you fly them to Morocco to do the Moroccan parts of those three episodes, and you’ve got another director in New York while that first director is in Morocco?

FOSTER: Most of the time, there are two directors in two locations shooting, and there might also be one prepping [doing pre-production work].

AX: But each director does get to shoot the entirety of his or her episodes by going from New York to Morocco?

FOSTER: They have responsibility for the whole episode.

FOSTER: We have two new directors – new to us because they’re British. So that’s an interesting experience for us, and for them, too.

AX: What would you most like people to know about AMERICAN ODYSSEY right now?

This interview was conducted during NBC’s portion of the Television Critics Association press tour at Pasadena’s Langham-Huntington Hotel.