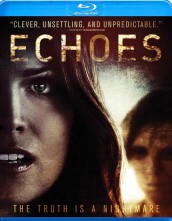 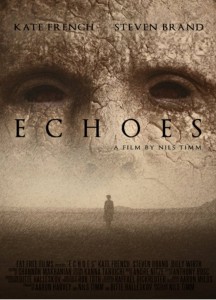 ECHOES was an official selection of the New York City International Film Festival and FilmQuest Film Festival. It won Best Actress, Best Screenplay and Best Director. All of this goes to prove that there are many different opinions and tastes out there – clearly, some people think this is a terrific movie.

The film does have gorgeous Joshua Tree, CA desert landscapes to recommend it, courtesy of cinematographer Robert Toth. Otherwise, however, it is illogical to the point of irrationality, almost scare-free and, worst of all, simply dull.

Anna (Kate French) is an L.A.-based screenwriter who suffers from night terrors and sleep paralysis. She’s having an affair with her manager Paul (Steven Brand), who tries to soothe Anna’s nerves and stoke her creativity by bringing her to his isolated glass house in the desert.

Shortly after their arrival, Paul has to go back to L.A. to deal with a difficult client. He offers to bring Anna back in a few days, but she insists on staying in the house, alone but for Paul’s dog. She then has worse night terrors, including a visit from a threatening figure made of sand, and wakes to find that someone or something has scrawled strange symbols all over one of the house’s glass walls while she slept.

Anna then has to leave the house in order to get a cell signal. She calls Paul, who suggests she call the police. Anna refuses and demands that Paul return to her.

This is the point where serious irritation may arise. So far, Anna has been whiny, doesn’t seem to either be writing or suffering from writer’s block – she just sits around and goes for walks – pops pills, drinks and then, when confronted with danger, freaks out but stubbornly refuses to do any one of a number of things that could help. She is, in short, very unsympathetic without being distinctive.

Then we get to the mystery at the heart of ECHOES, which raises the question of how exactly its elements have remained a mystery until now. Several other characters do things that are highly counter-intuitive and the sleep paralysis winds up being something of a red herring. It’s very hard to invest emotionally or even intellectually in a story where, the more we learn, the less sense anybody’s actions make.

Both the glass house and the sprawling vistas of ECHOES are stunning. Alas, the tale contained here doesn’t live up to its surroundings.