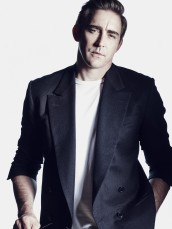 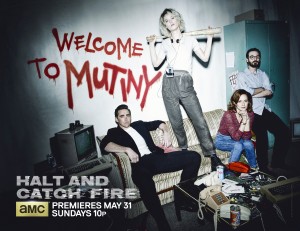 AMC’s HALT AND CATCH FIRE, a great show that deserves your viewership if you’re not already watching, returns for its second season tonight at 10 PM. Created by Jonathan Lisco, HALT AND CATCH FIRE is set in the 1980s and deals with the advent of the personal computer (the title refers to a command that causes a hard drive to destroy itself).

Lee Pace stars as Joe MacMillan, who arrives at the small Texas company Cardiff Electric in 1982 and proceeds to more or less trick them into developing a new PC to compete with IBM, where Joe was previously employed. Joe has a major self-sabotaging streak – he’s not above lying, stealing or playing off one ally against another. On the other hand, he is able to inspire his colleagues to feats of genius and rebellion that they otherwise wouldn’t attempt. As computer developer Gordon Clark tells Joe at one point, “You’ve made us all crazy!” This is Gordon’s way of trying to persuade Joe to rejoin the team, which is both accurate and bizarrely complimentary.

Pace starred in two seasons of the cult fantasy series PUSHING DAISIES as pie-maker Ned, whose touch could restore life or bring death. His first major screen role was as real-life transgendered performer Calpurnia Addams in A SOLDIER’S GIRL. Pace was also a regular in WONDERFALLS. Recently, he’s costarred in LINCOLN as pro-slavery Fernando Wood, in GUARDIANS OF THE GALAXY as the villainous Ronan the Accuser and in THE HOBBIT trilogy as the wily Elf king Thranduil.

ASSIGNMENT X: So was this subject matter – the dawn of the personal computer – on your radar at all before you got involved in HALT AND CATCH FIRE?

LEE PACE: Technology, absolutely. I’m always interested in technology and new things. I think that’s something I have in common with Joe MacMillan. The more I work on the show, the less it becomes about computers, the more it becomes about the people. But actually, I think that’s the truth with computers, too. It’s not about computers. There are people who, this is their life, making things like [computers], but really, it’s an expression of your life, the people you love, how you learn things you didn’t know before, how to kind of create your persona as you want to online. It’s just expressions of life. 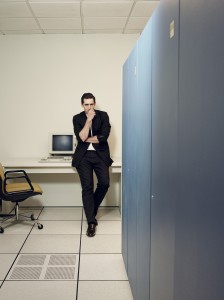 AX: Does Joe know what he wants? Or does he know, gets it and then realize it wasn’t what he wanted after all? For instance, at one point in Season 1, he secretly destroys the shipment of computers that his team made.

PACE: Does anyone really get what they want in life? That’s the point. The fact is, Joe completes – he made the thing. He shipped it. And that’s a really hard thing to do. It’s an almost impossible thing to do. There are so many companies at this time trying to make computers, and they actually made it, and they shipped it. But I think there’s this Chekhovian problem that he finds himself sitting with, which is [his computer is] a clone of someone else’s machine. And [he thinks], “I can do better. The future deserves better. The people who will use these machines and the cultural moment that is on the horizon deserves better from people like me.” I’ve been thinking about Chekhov a lot in approaching this second season and, not to bore everyone to death by comparing this show to Chekhov, but just that idea that in [Chekhov’s play] THREE SISTERS, they spend the whole play thinking, “When we get to Moscow … When we get to Moscow …” And they never do. That’s a part of this show that I find very interesting.

PACE: Well, the character is an enigma to me. He is a riddle, in a way. It’s almost what Jon [Lisco] had said when he was talking about the title. The title is a riddle, HALT AND CATCH FIRE. What those words mean in sequence is a riddle. The character is a riddle. I think all the characters in the show are a riddle. But so are the people I know in my life. I think that is the thing I am most interested in about with this show, is its self-examination. You try to unravel, “Is that what that meant? Is that why I’m having a hard time falling in love? Is that why I have a hard time getting what I want?” or whatever. “Is that why I don’t understand the meaning of God?” or XYZ. Whatever it is. It’s about figuring out those riddles, and that’s been my experience playing Joe – trying to figure out who this man is, because he doesn’t always succeed. The bugs in the machine of Joe MacMillan are the most interesting things. The fact that he made this computer, but it was a failure. It’s something I’m very interested in. It’s great drama, and it’s simply about people.

What makes the story fascinating is this sense of, great love is right next door to great heartbreak. Ambition is right next to this kind of inertia of time is passing and who cares anyway? And in examining those human qualities at a specific moment in time is illuminating about that moment in time. Chekhov was writing in Russia at the end of the 1800s, pre the Revolution. Russia’s a very different place now for those people. [In HALT], these are Americans, creating technology before a revolution that transforms the way we behave. I think we’re just in the middle of the brink of this revolution. This is before it. These are the people who are looking towards it and examining how they fall in love, how they deal with their defeat, how they maneuver through life. It’s a worthy examination, because it teaches us about this technology and about how the culture has been influenced by the technology. The question always is, does Frankenstein bear a mark on the monster he makes? Is the monster a reflection of who the Frankenstein is? Is this technology a reflection of all these sociopaths and generous people who have created it and given it birth?

AX: To make a perhaps strange comparison, do you see any similarities between Joe and Thranduil the Elf King in THE HOBBIT? They’re both a little mysterious and they both like to manipulate other people …

PACE: Maybe I’m working on something with the universe with these two characters [laughs]. I don’t know. It was unintentional if it’s true – you just play the scenes that you’re given. The Joe we see in this next season is going to be very different. They’re living in a very different set of circumstances.

AX: What would you most like people to know about HALT AND CATCH FIRE going into Season 2?

PACE: That’s a tough one. [laughs] There are so many things. I guess I would want people to be open to the enigma of it, what we’ve talked about, the riddle of it, the connections people make [about whether to be] available to people in their own lives – the troubled relationship with their boss or their strained relationship with their girlfriend, their success when they’ve succeeded. I think that’s really what the show is about; it’s less about the machine.

This interview was conducted during Starz’s press day for the Television Critics Association at Pasadena’s Langham-Huntington Hotel.