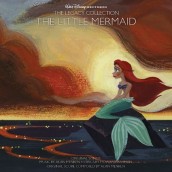 Disney continues their exceptional series of hard-bound “Legacy Collection” releases with THE LITTLE MERMAID, the 1989 soundtrack, and film that really put the studio back above animated water, netting the fist of many best Song and Score Oscars for the LITTLE SHOP OF HORRORS stage duo of Alan Menken and Howard Ashman, whose hip energy was sought to awaken the studio from its animated doldrums with this now-classic adaptation of the Hans Christian Anderson fable – the first fairy tale for Disney since 1955s SLEEPING BEAUTY. What’s interesting about hearing the MERMAID in her complete, symphonic glory is just how much glowing, thematically instrumental wealth lies in Menken’s score.

Crossing playful, bouncy “Mickey Mouse”-ing cartoon music with the motif-driven nature of movie tradition, Menken is sure to use the infinitely memorable hooks of these now-classic songs to tie itself his instrumentals together, showing this as indeed Oscar-worthy stuff, from the score’s regal rhythms to its heroine’s romantic pining for two legs and a terrific cliffhanging climax with the dastardly, organ-accompanied villainy of the tentacled Ursula. Menken and Ashman’s songs are as clever as ever in hearing a Calypso-Rasta beat for a matchmaking crab, Pat Carol’s Mack the Knife-like delight as she belts out “Poor Unfortunate Souls” or Jodi Benson’s wistful pleas to be “Part of Your World,” the tune that set the tone for every Disney heroine who wanted something better. Indeed, the novel device of having Ariel’s ever-rising singing voice subsumed into Ursula’s malefic melody still sends chills up the scaled spine. This MERMAID legacy continues these exceptional special editions’ tradition of offering original song demos from the artists, including a second CD that has Menken and Ashman pouring their Broadway glee into the tapes that would change the course of animated soundtracks. The book-like packaging offers charming new art in addition to concept sketches and touchingly emotional liner notes by Menken and MERMAID co-director John Musker. All make this MERMAID worth a new dive no matter how many times it’s already surfaced on your stereo’s shores.

Click on the link to Purchase the LITTLE MERMAID soundtrack