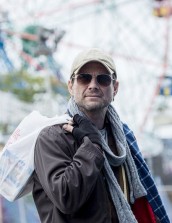 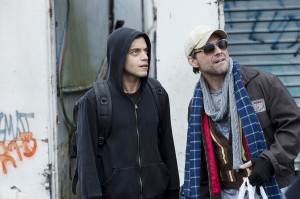 In USA Network’s new series MR. ROBOT, Wednesdays at 10 PM, Christian Slater plays the title character. That’s not really his name, of course, and he’s not really a robot, but his name, what he’s like as a human being and what he’s actually up to are all mysteries for now. Mr. Robot heads up a group of anarchists hoping to disrupt big businesses by hacking into their computer systems. Elliot (Rami Malek) is Mr. Robot’s new associate, an idealistic young hacker who is tasked with bringing down the company he works for from within.

The character in MR. ROBOT represents the latest in a long line of hellraisers of various stripes played by Slater. The New York native began his acting career in childhood on daytime dramas including RYAN’S HOPE. Slater made an impression playing high school rebel J.D. in HEATHERS and a pirate radio deejay in the cult favorite PUMP UP THE VOLUME. Other major credits include TRUE ROMANCE, SLIPSTREAM and leads in the TV series THE FORGOTTEN, BREAKING IN and MIND GAMES.

AX: How would you describe the series MR. ROBOT?

CHRISTIAN SLATER: It is a show about a disgruntled young computer hacker who gets recruited into this organization that wants to erase all corporate debt [from people who owe money to corporations] and take the student loans off the shoulders of the students and restore balance and harmony and society.

AX: Do you know your character’s back story in MR. ROBOT?

SLATER: I have a good sense – actually, when [series creator/executive producer] Sam Esmail and I first met and sat down and talked about it, I had some questions and we were on a similar page, which is very rare when that happens, so it was nice. I think it is in a way a LOST-type situation, where things are being revealed to me as I read new scripts. This was a very mysterious character to start off with – even when Elliot asks questions like, “Who are you?” I say, “That’ll come later.” So little tidbits are kind of handed out there, slowly doled out, and I think it’ll be an interesting reveal when it does all come out.

AX: How much physical action is there?

SLATER: It gets a lot more explosive. That’s the one thing with the Mr. Robot character is, he is much more interested in blowing things up, and Elliot is always about finding the other way to handle a situation. “Maybe we don’t need to kill all these innocent people. Maybe we can find an easier, softer way to deal with this computer company” [laughs]. So that’s sort of the back and forth, antagonistic kind of relationship that he and I will continue to have through the season.

AX: Do you think that Mr. Robot as a character is ultimately malevolent or benevolent?

SLATER: You know, it’s presenting a possible scenario that could happen in a society, where one conglomerate has all this power, and we’re living under that repressive, totalitarian situation, where people are just being handled like sheep. So I think he wants to do the right thing, become a good leader, absolutely.

AX: You started out essentially playing the Elliots of the world …

AX: And now you’re playing The Man. When you were playing characters like Elliot, did you have any thoughts of, “Someday, I would or would not like to play The Man”?

SLATER: I think playing The Man is okay. It’s funny to be sort of the Morpheus-type character in this role and be playing to this younger kid. It’s very similar to, in a lot of respects, PUMP UP THE VOLUME and that character that I played, sort of rebelling and a rebellious youth-type character, I loved that character, it was fun, and to get the opportunity to do something like that on television on a weekly basis with Rami, who’s a wonderful actor, that’s the thing, I think we’re most fortunate here that Rami is such a phenomenal actor and really very gripping performer. Like I was when I was twenty. We have all those things in common.

AX: If you had the ability to give advice to your younger self, what would it be?

SLATER: Somebody asked me that the other day. I would see him, I’d be like, “Hey, kid, how are you?” I’d put my arm around myself, as a young kid, and say, “It’s all going to be okay,” and somebody said, “Well, what would the young kid say?” And I was like, “Probably go f**k yourself, old man” [laughs]. A terrible response, but that’s what I would have said at twenty.

SLATER: Perseverance, belief in myself – honestly, I can’t do anything else. I love this business, I love getting to act, I love finding new characters to play and working with creative, talented people. So as long as I can keep getting the opportunities to do that, I’m very happy and thrilled.

AX: MR. ROBOT obviously deals a lot with technology. Are you very computer-literate?

SLATER: I am somewhat. I mean, I’ve gotten like much more with the apps and paying my own bills. It’s actually gotten so you don’t need to have a business manager any more, you can do it yourself. You don’t need that sort of thing. When I was a kid, growing up, that was, you’d always have to hire somebody to do that stuff, and now it’s nice to kind of take a little bit more control and have a little bit more awareness, and I think the technology has made that possible.

AX: You went with the MR. ROBOT pilot to the South By Southwest SXSW Festival in Austin, Texas. How did that go?

SLATER: It won the Audience Award there. I was very happy that it actually won the award. It actually went well in another respect, because there were a lot of technical experts in the audience. So they all were so thrilled with how accurate [the show was]. I think the fact that Sam has such a history with this and maybe has dabbled in a little bit of hacking himself, that he’s been able to lend a realistic quality to this show which the audience was very relieved to see.

AX: What would you most like people to know about MR. ROBOT right now?

SLATER: I guess exactly when it’s on [laughs – again, Wednesdays at 10 PM] and we’re just happy to be involved with it.

This interview was conducted at NBC’s Summer Press Day at the Langham-Huntington Hotel in Pasadena, California.