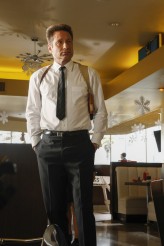 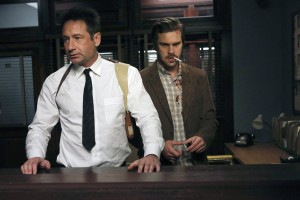 NBC’s new series AQUARIUS, Thursdays at 10 PM (or available streaming on NBC and On Demand in its thirteen-episode entirety), is a work of historical fiction. Set in Los Angeles in the Sixties, it has original characters LAPD detectives Sam Hodiak, played by David Duchovny, and Brian Shafe, played by Grey Damon, looking into the disappearance of a runaway teenager. Their search brings them to an unsuccessful musician named Charles Manson, played by Gethin Anthony.

AQUARIUS creator/executive producer John McNamara talks about the origins of the series with a group of journalists at a panel sponsored by NBC. When the panel ends, he takes the time for some further discussion.

During the panel, McNamara, whose previous credits include IN PLAIN SIGHT, FASTLANE and JERICHO, explains that he didn’t initially envision AQUARIUS as a television series. “It was originally going to be a quintet of novels. [Fellow executive producer] Marty [Adelstein] and I have known each other for many, many years, in a former life as agent and client. So I went to him one day and I said, ‘It’s a great idea, detectives, L.A., 1967. They end up crossing paths with Charles Manson. So we take a year off from TV and write a quintet of novels,’ and Marty’s like, ‘That’s a terrible idea.’ I was like, ‘AQUARIUS is a bad idea?’ He goes, ‘No, doing it as novels is a bad idea, because in a novel, you can’t hear the music, and that’s one of your main characters.’ I said, ‘Oh, gosh. We’re going to do a TV show.’ That was 2009, and we’ve been developing it ever since. We finally pulled all the threads of it together in 2013, when we met with David [Duchovny] for the first time, when there was finally a script and something to talk about.”

This is far from the first narrative work to look at Manson, and McNamara says

The series takes place before Manson had his disciples commit group murders. Although Manson is one of the main characters, McNamara adds, the story is not focused solely him. “It … weaves some things about Manson that are true, some things that are fictional, and entirely fictional characters like David’s character of Hodiak. Emma [the missing teenager played by Emma Dumont] is also fictional. Grey’s character is fictional. So it’s a really large-tapestry look at social change, politics and crime in Los Angeles. Manson is one of the main arteries, but not the only artery. Certainly, the political and social change – it’s as much about that as it is about the evolution of Manson.

“I would say there is virtually no mystery about Charles Manson, but there are things that we reveal about him in the series that I don’t imagine the audience will see coming. For instance, we meet Manson’s mom. She’s interesting, as you can imagine. So we actually delve very deeply into every character’s psyche, as much as you can in thirteen hours. Manson is one of the characters that you really want to understand. I think it’s a mistake when you’re making drama to just say the character’s a monster and just make him a monster. I want to know why he did monstrous things. I want to know what the pieces of his psyche were. I think it’s been a real collaboration with Gethin of building a real historical fiction human being character out of the pieces of Manson, but also our imaginations, also the intersecting stories with the fictional character. It’s sort of like sculpture. You just put together the pieces and try and make something that feels real.”

AX: What time frame does the first season encompass?

AX: So would subsequent seasons all be in three- or four-month increments?

AX: And how serialized and how standalone are the episodes?

AX: Besides the counterculture, does AQUARIUS show any of the civil rights groups of the period?

AX: Gethin Anthony is actually English. Did you have any hesitations about casting an Englishman as Manson?

McNAMARA: No. Not when he’s as good as Gethin.

AX: Did you know his work from GAME OF THRONES?

AX: What about David Duchovny? Were you an X-FILES fan?

AX: Given that your story is set in the Sixties, were there any things that you had to figure out, “How would they do this before cell phones and computers?”

McNAMARA: Yeah, it was an ongoing process of research, but occasionally, one of the questions was, “How did they get printed information?” They had teletype, which I didn’t know about. That kind of thing was fun.

AX: And what would you most like people to know about AQUARIUS?

McNAMARA: It is a dark, suspenseful, historical thriller about the time in our country when everything changed faster that you could imagine.