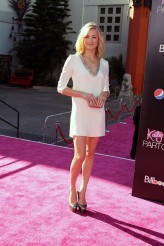 ©2012 Sue Schneider
Yvonne Strahovski at the Los Angeles Premiere of KATY PERRY: PART OF ME
Interviews 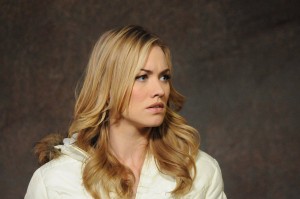 Yvonne Strahovski is no stranger to playing characters involved in spycraft – witness her five years as the redoubtable Sarah Walker on CHUCK. While her seductive serial killer Hannah McKay on the final two years of DEXTER wasn’t employed by a government agency, she certainly did her share of stealthy acts, too. Now Australian actress Strahovski – who can currently be seen on the big screen in I, FRANKENSTEIN – is headed to London to play a CIA agent stalking Kiefer Sutherland’s Jack Bauer in Fox’s 24: LIVE ANOTHER DAY. The twelve-hour miniseries is scheduled for this summer.

Strahovski is happy to talk about her new gig at a party thrown by Fox for the Television Critics Association. The catch is not so much that she’s signed the Official Secrets Act as (at least, she claims) she simply doesn’t know very much about her new role thus far.

ASSIGNMENT X: Were you a fan of 24 before you were cast in this part?

YVONNE STRAHOVSKI: I have not watched 24. I mean, I’ve started watching – I’ve been watching all eight seasons, so yeah, it’s great.

AX: On TV, between CHUCK and DEXTER, you’ve been something of a femme fatale. We can assume, even if there’s not much you can say right now, if your character is going up against Jack Bauer, she’s not a wilting flower. Is playing these fierce people something you particularly like, or is that just how you’re getting cast?

STRAHOVSKI: I think it’s an opportunity that’s coming my way. I’m not sure. I don’t know if I would describe my 24 character – I really don’t know how to describe her yet, because I’m still working that out. God knows how that’s going to turn out.

AX: With what you know about her and what you’re allowed to say, how would you describe your 24 character?

STRAHOVSKI: I think she knows a lot about Jack Bauer. I think she’s extremely intelligent and intuitive, probably a little risky, maybe in a Jack Bauer-ish type way where she doesn’t maybe play by the rules, so yeah, we’ll see what happens.

AX: The 24 miniseries takes place and shoots in London. Have you worked there before?

STRAHOVSKI: No, I’ve only ever spent three days inLondon, so this will be my first time working there and getting to know the city.

AX: Anything else you’d like to say about working on 24?

STRAHOVSKI: Nothing other than I’m really excited to work with an amazing group of creative people, and I’m really looking forward to working on episodes with the amazing writing.

Related: Exclusive interview with Yvonne Strahovski on the finales of CHUCK and DEXTER