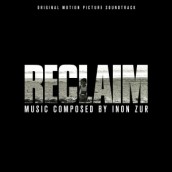 Israeli composer Inon Zur is a rock star when it comes to scoring dozens of videogames from LORD OF THE RINGS to EVERQUESTand SOULCALIBER, But success in one genre can often lead to a prison-like sentence from those who can’t see movie scoring talent from the sword-swing PS3 trees. Thankfully, Zur has gotten to break out with exceptional results in the far more realistic realm of child trafficking for RELCLAIM. John Cusack can certainly lay claim to that title as he keeps getting pulled back into the VOD arena as a bad guy, this time as the deceptively calm villain whose band of miscreants terrifyingly milk a desperate couple for all of their money, with the bait of a Haitian girl they think they’ve adopted.

While this surprisingly well-made and acted thriller certainly delivers on the improbable, white-knuckle chases you expect from the iTunes action genre, Zur wisely chooses to put equal emphasis on the story’s emotion. So before cars end up on cliffs and people are shooting at each other in picaresque Puerto Rican locations, Zur’s strong, moving themes concentrate on emotional bonding, with an exceptional performance by the Macedonia Orchestra giving his melody-heavy score a real depth of feeling – all the better to hit the chase with rhythmic propulsion when it inevitably comes and doesn’t stop. Though meant for the small screen, Zur gives RECLAIM a lush, exciting symphonic expanse with the kind of dramatic, human depth that elves, soldiers and androids might not exactly have for this niftily affecting score, making a winning argument that video game composers are just as capable of scoring the kind of live action assignments you might not expect their talent to lie in, no more so than when grabbing a kid off a cliff-hanging jeep works as well for emotion as it does excitement.

Click on the link to Purchase the RECLAIM soundtrack