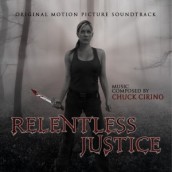 Grade A, B-composer Chuck Cirino has fun with a female Rambo

David A. Prior, the Z-movie commando who gave the world the hilariously brutal DEADLY PREY is back in the woods with a one-person army who happens to sport a killer figure and an Australian accent. While I don’t know if Victoria De Vries beats someone to death with their own dismembered arm, at the least she’s got Chuck Cirino as her musical wingman when it comes to racking up a body count. A composer who’s been to the ‘Nam of countless schlock movies, Cirino can be counted on to give his all to this sort of insanity, from the killer robots of CHOPPING MALL to the Godzilla-sized skeleton creature called BONE EATER. For just like these filmmakers and actors who know they aren’t making great art, Cirino is still out to have a fun time with the very limited resources at hand. And while he might not have the London Symphony Orchestra at his disposal, what he does give his cheesily sampled sound is surprisingly decent, self-aware music that often has more melodic and thematic content than the way bigger, and better pictures one hopes he could somehow get. RELENTLESS JUSTICE is another crafty, and funny score, coming up with a ripping, mean-ass melody that still tries to impart its heroine with an amount of piano tenderness that one might connote with the fairer sex.

As she goes about winning trophies during this most dangerous game scenario, Cirino delightfully goes off the expected action-pulse reservation, first by skinning the strains of Ludwig Van Beethoven into suspense music, and then with a strumming acoustical sound that makes RELENTLESS JUSTICE into a western score with a touch of Spaghetti, especially when an electric accordion seemingly arrives from nowhere. This is one composer who deserves a female Rambo to rescue him after decades of being a POW in VOD prison camp, even if he can’t help but have a great time playing the hapless mayhem around him for all its worth – and then significantly some more.

Click on the link to Purchase RELENTLESS JUSTICE soundtrack