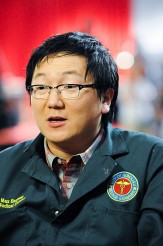 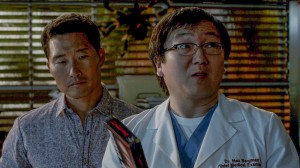 CBS’ HAWAII FIVE-0, Fridays at 9 PM, is currently enjoying its fifth season of crime-fighting in some of the most beautiful locations on American television.

Masi Oka joined the show as helpful medical examiner Dr. Max Bergman in its first season; he became a regular in Season 2. The actor, originally from Tokyo, Japan, moved with his family to Los Angeles at the age of six. Before HAWAII FIVE-0, Oka spent four years as the time/space-jumping Hiro on HEROES. He recently played Ken Tanaka in the feature biopic JOBS and appeared as tech geek Bruce in the big-screen GET SMART reboot. Oka is also a special effects technician whose work at Industrial Light and Magic encompasses effects on the second STAR WARS trilogy, among other high-profile projects; he’s also founded the Mobius Digital company.

Oka is at a party thrown by CBS for the Television Critics Association, where he talks about what’s going on in HAWAII, including what we may see in the Halloween episode.

ASSIGNMENT X: How is HAWAII FIVE-0 going this year?

MASI OKA: I’m not in the first two episodes, but it’s been going great.

AX: Is there a reason you’re not in the first two episodes?

OKA: No. I’m typically in a season premiere, but they kind of switched the shooting order. There’s nothing to be read into it.

AX: Do you have a favorite scene or episode from last season?

OKA: I have to say, whenever Max’s girlfriend Sabrina [Rumer Willis] comes on, it’s always fun. I enjoyed the Halloween episode.

AX: Do you think you might get to dress up for this year’s Halloween episode?

OKA: I think so. That’s been the fun of the recurring theme – Max always has a Keanu Reeves-themed costume, so we’ll see what he does this year.

AX: It’s been announced that there’s going to be a new iteration of HEROES. Are you going to be involved with that?

OKA: A question I get. I can’t say yes, I can’t say no. All I can say is that Tim Kring has reached out to me, I’ve talked to him, we’ve had talks. I don’t know. I’m currently on a CBS show, so … A lot of moving parts.

AX: At this point, do you have a preference between working in Hawaii and working in L.A.?

OKA: They’re both great. To be honest, I do come back to L.A. a lot, because I don’t shoot as much in Hawaii. Hawaii is just beautiful – the people there are so gracious and open, so hospitable. It’s beautiful, the food, culture – it would be great to have a balance.

AX: I also wanted to ask you about the WORLD WAR Z: THE COMPLETE EDITION audio book, the adaptation of Max Brooks’ novel – which is very different from the film – that came out last year. It has a cast of about forty actors. You play a survivor who had to escape from his nineteenth-story apartment, which was infested with zombies. Had you read the book before you got involved in that?

It was definitely a lot of fun. Max is really cool. He was there [author Brooks also plays the Interviewer in the audio book], and I was working on a project with his father, too, so it was interesting.

AX: Max Brooks’ father is Mel Brooks. What are you working on with him?

OKA: I can’t really talk about it. That’s still ongoing. It’s not with Mel directly, though – it’s with one of his properties. I’ve met with Mel in regards to this project because it’s one of his.

AX: Are audio books something you’d like to explore further? Some people really like doing them, some people feels it’s exhausting.

OKA: I think it’s interesting. With audio books, you have to quote-unquote act more, a little bit, because you don’t have the visuals, so you actually have to try to push a little bit more, but without feeling forced. So you have to connect with them, and you have one less medium to give it, so you have to find other ways of doing it.

OKA: A couple of movies I’m working on behind the scenes. And I started my game company last year. It’s called Moebius Digital, and our first app is called OUR SUPERHERO.

AX: Anything else we should know about you and HAWAII FIVE-0 right now?

OKA: Not much. We’re very excited to be back shooting and this is Season 5.