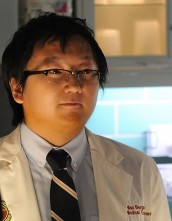 The actor talks Max - and Hiro from HEROES 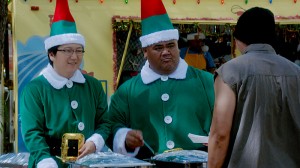 On CBS’s HAWAII FIVE-0, now on Friday nights at 8 PM in its fourth season, Masi Oka’s character Dr. Max Bergman is an asset to the team in terms of both knowledge and humor. The medical examiner first appeared as a recurring character in the show’s first season, with Oka becoming a regular in Season 2.

Before HAWAII FIVE-0, Oka spent four years on HEROES as kind-hearted time-and-space-bending Hiro Nakamura. He also appeared as tech geek Bruce in the big-screen GET SMART reboot. Oka is also a special effects technician whose work at Industrial Light and Magic encompasses effects on the second STAR WARS trilogy, among other high-profile projects.

At a party thrown by CBS for the Television Critics Association, Oka talks about joining the FIVE-0 team.

MASI OKA: Definitely. I can’t say I grew up on it, but I got to see a lot of the episodes and the theme song is iconic. Although my guilty pleasure was probably watching THE DUKES OF HAZZARD more than HAWAII FIVE-0.

OKA: Well, it was definitely, “Yay, Hawaii.” Any time a show wants to have you on, it’s amazing. I’m very grateful for that. At that time, though, I had a big hesitancy about going to Hawaii. I actually turned it down the first time, because my mother was still recovering from her breast cancer operation, so I didn’t want to change the status quo of being able to see her every few weeks just to check up on her.

AX: Where is your mother?

OKA: She’s in L.A. I just didn’t want to leave her by herself or change anything drastic, and going to Hawaii was a drastic thing. But the show runner Peter Lenkov had been generous enough to give me time off and a little more freedom because of that, so I’m grateful for that.

AX: Was Max always conceived as a series regular role, or were you going to do an arc and they wanted to keep you?

OKA: It really started when I was working on my movie with Alex Kurtzman and Roberto Orci [who are executive producers with Lenkov on HAWAII FIVE-0]. We were breaking down the story for the movie, and then, “By the way, we have HAWAII FIVE-0 on the air. You want to do a guest star?” It’s like, “Yeah, sure, it sounds great. I get to go to Hawaii, do a quick stint and come back.” And then one thing led to another and all of a sudden, there were times I couldn’t do it in that season, but then they just said, “We just want to lock you in and make you a regular.” So that’s how it turned out.

AX: What was the movie you were working on?

OKA: I was working on THE DEFENDERS, which was an original idea I had. That was actually the first treatment I sold to DreamWorks, with Kurtzman and Orci producing. So that’s what we were working on. We’re still kind of mulling that about. It’s a long development process.

AX: Do you feel there’s any sort of continuity between Hiro on HEROES and Max on HAWAII FIVE-0?

OKA: I guess the continuity is the same actor is playing it. There might be the same spirit in terms of, they’re both comic geeks, but otherwise I feel they’re not that similar. Max is more dry. He seems to be more Mr. Realistic and Positive, versus Hiro was a lot more optimistic and idealistic. They’re both passionate about what they do – Hiro was passionate about being a superhero and Max loves dead bodies and analyzing them. He gets excited about that. I mean, there was a moment I remember where I was like, “Oh, I’m channeling my inner Hiro here,” because Max went to a forensic lab in Hawaii where they had all this amazing stuff, and he was supposed to be fascinated by it. I brought back a little bit of that [Hiro enthusiasm] into it, but it’s not really continuous, in my mind.

AX: Can you say who Max is as a person?

OKA: He’s somebody who believes in the moral good. And he loves being a coroner just because there’s truth in the bodies. He’s always about the truth and whatever he can do to help that. I think he’s growing – he’s becoming more comfortable as a human being. He’s comfortable making jokes, he’s comfortable calling Commander McGarrett “Steve” [Alex O’Loughlin] and getting more friendly with the Five-0 family, being part of their ohana. So I think he’s growing in terms of that.

AX: How much input have you had into who Max is as a character?

OKA: I think significant enough. I had a chance to speak with the writers and I always go to the writers’ room and talk to them. I actually want to transition, do more things behind the scenes, so I try to observe a lot, whether it’s observing people directr or going to the writers’ room. But I had a chance to talk to them and they gave me a nice back story and we were able to do a back story episode. Hopefully there will be another Max-centric episode this year.

AX: Was the back story episode your favorite episode so far?

AX: Are you getting in on the physical action much?

OKA: Here and there. I mean, Max killed a guy, for God’s sake. He’s got a gun and we know he has it in him.

AX: What’s the coolest location you’ve gotten to go on for the show?

OKA: Man. That’s the great thing about Honolulu and Oahu – there are so many amazing locations. I’m glad it’s not VENICE FIVE-0, where we’re faking HAWAII FIVE-0 on [California’s] Venice Beach [laughs]. No disrespect to Venice Beach. But I’m trying to think what the coolest one was. There are so many things – I just love the jungle. Sometimes they’ll open up certain jungles that you usually can’t get into, and those are the neatest places to go, because you’re right in the wildlife and you can see all these amazing trees and nature and be immersed in there.

OKA: I definitely get that. The locals love HAWAII FIVE-0, but all the tourists who know me from HEROES. So I still get the mix of that when I’m in Hawaii.

AX: Have you done any effects work lately?

OKA: Not yet, although I might do something. I am actually starting to program, because I’m trying to write a couple of game and app ideas, because it’s easier to do them. I’m tired of asking people to do them for me.

AX: Anything else you’d like to say about HAWAII FIVE-0 or your career overall right now?