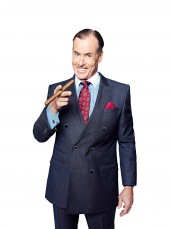 The actor also discusses why he loves GLENGARRY GLEN ROSS 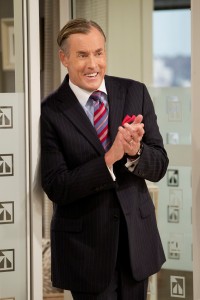 In TBS’s new half-hour comedy GROUND FLOOR, Thursdays at 10 PM, Brody (Skylar Astin) is an up-and-coming San Francisco broker who falls for Jennifer (Briga Heelan), who works in the building’s maintenance department. More than skyscraper floors separate them – Brody’s boss Mr. Mansfield, played by John C. McGinley, doesn’t think any of his people should be fraternizing with the help.

GROUND FLOOR was co-created by Bill Lawrence and Greg Malins. Lawrence also created the NBC comedy SCRUBS, where McGinley spent eight years as acerbic Dr. Perry Cox. The actor, originally from New York City, began his bigscreen career with SWEET LIBERTY and PLATOON; most recently, he appeared as famed sportscaster Red Barber in 42. McGinley is also a Broadway veteran, having been in the original production of REQUIEM FOR A HEAVYWEIGHT and in the 2012-2013 revival of playwright David Mamet’s GLENGARRY GLEN ROSS for eight months.

McGinley is present at a poolside party thrown by Turner, parent company of TBS, TNT and Turner Classic Movies, for the Television Critics Association, where he takes some time to chat about TV and why GLENGARRY speaks to him so deeply.

AX: What is GROUND FLOOR about?

JOHN C. McGINLEY: It’s a comedy about an office building in San Francisco where [the people on] the top floor are all the big stocks and bond brokers, and the ground floor is the janitors and the people who run the office. I’m the head of the top floor. One of my guys falls in love with a female janitor. Neither one’s allowed to be with each other, a la ROMEO AND JULIET/WEST SIDE STORY, and so it’s an exploration of that class disparity. She can’t be with him; he can’t be with her.

AX: So how snobbish is your character, Mr. Mansfield?

McGINLEY: Oh, he’s not snobby. His thing is, you should work twenty hours a day until you’re forty so you’ve got a chance at having the life that you want to have. And the girl [Brody] falls in love with is, “Yeah, but we get off work every day at five. This is great.” And so there’s two different value structures pulling him from two different directions.

AX: Is Mr. Mansfield in any way comparable to Dr. Cox on SCRUBS?

McGINLEY: No, because the SCRUBS character didn’t want to be the boss. He just wanted people to not kill people, to save lives, and the character in GROUND FLOOR – “It’s my business. You work for me. I’m responsible for you.”

AX: You’ve spoken about your love for GLENGARRY GLEN ROSS. Is Mr. Mansfield comparable at all to any of the characters in the play?

McGINLEY: No. God, no. Those are all desperate, hopeless men.

AX: Who did you play?

McGINLEY: Dave Moss. And Al Pacino played Shelley Levene and he was unbelievable.

AX: What is it about the depiction of desperate, hopeless men that you find so compelling, as either a viewer or a performer?

McGINLEY: Because all actors, at some point or another, and for a lot of us, more often than we want, have been desperate and hopeless. And so if you’re brave enough to do it, it’s not that hard of a path of exploration for actors to dig into hopelessness.

AX: Do you want to go back to Broadway, on your next hiatus?

McGINLEY: We’ll see what floats. You never know what you’re going to get invited to.

McGINLEY: It hasn’t been yet. They’ve treated us first class, soup to nuts.

AX: And are you involved in any other projects we should know about?