A small car that packs a lot of power and accessories 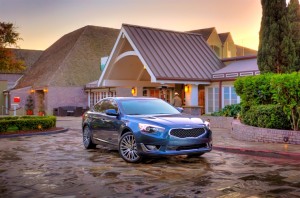 KIA is famous for packing in a lot of fire power in its vehicles and with the 2014 Cadenza, they manage to outdo themselves once again.

It’s a luxury car that is filled with numerous bells and whistles that not only makes it an impressive ride, but also one where you’re continually discovering new and exciting features about it.

The look of the vehicle is somewhat traditional. It has nice smooth lines, it looks very modern and resonates with classiness when you step back and stare at it from a distance.

The headlights have a nice style to it that James Bond would love and the wheels and rims are large and grab your attention. 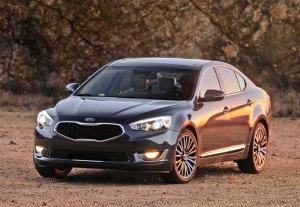 While the Cadenza looks snazzy on the outside, the inside is where it packs a high-tech punch. The front and back seats are graciously spacious – more than you would expect when staring at the car from the outside.

The heated front seats are a bonus, as they are on many KIA vehicles and can be adjusted for each individual seat (they also have the ability to cool down as well).

There are two pinpoint lights on the top that offer just enough light to see things in your vehicle when driving at night, without it being too obtrusive.

The menu buttons on the steering wheel allow you to control just about everything you need.

On a long trip from Southern California to Northern California, the Cadenza was a very comfortable ride. It’s quiet and like all of KIA’s cars, very smooth. In fact, it’s very hard at times to determine the speed of the vehicles unless you look at the speedometer. Sixty miles per hour feels like you’re going 40 in the car. It’s a strange sensation to think you’re going slower than you actually are, but it also reminds you how sturdy and well built these vehicles are. 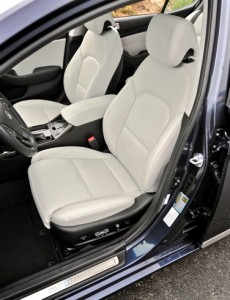 This is where it really excels with excellent features. When you operate the Cruise Control, it has the ability to sense if there are cars getting too close to you. You set the distance of how many cars that you want at a distance or not – and the car will slow down or speed up to match that distance.

This function takes some trial and error to get used to, but once you perfect it, it’s a great benefit, especially on long distance drives.

The other great feature is an optional one. If you want to know if a car is too close to you, especially when you want to turn into a lane, it gives off a beeping sound so you don’t veer over at the wrong moment.

The trunk is spacious and even features a nice little first aid kit for emergencies.

The one strange feature is a clock in the center dash that isn’t numerical but rather a traditional looking clock with the minute and second hands. It’s not as easy to read, especially while driving, but it does give the cars a little extra old school panache. 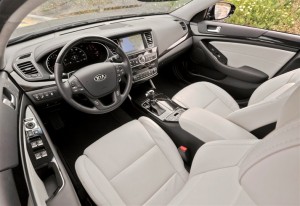 While I think the larger sized KIA vehicles are more my style, for those that have luxury in mind, you can’t go wrong with this. From it’s easy ride to its numerous special features, it offers great value for its price. It’s yet another crown jewel in an already impressive KIA line of cars.