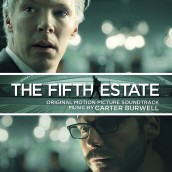 Where you could have synth keyboards or an orchestra playing computer espionage in the dial-up modem days of WAR GAMES or THE NET, hacking has now grown to become an international enterprise of the hip and politically savvy. And along with these very good looking nerds, the techno thriller genre’s music has evolved into lightning-fast connection combos of trance-industrial rhythms, as often practiced by DJ’s getting their feet wet as film composers. So it’s nice to hear a composer who helped rep a new wave of film music back in the 80s with the oddball likes of BLOOD SIMPLE and BEING JOHN MALKOVICH getting the chance to dive the electronic information stream with Wikileaks, and coming out with a FIFTH ESTATE score that’s both of-the-musical moment while offering orchestral food for thought as the soundtrack’s moral backbone.

THE FIFTH ESTATE marks Carter Burwell’s fifth collaboration with filmmaking Bill Condon after the dirge-like doom of GODS AND MONSTERS, KINSEY‘s folksy sexual eccentricity and the two rock romance-cum-vampire scores for BREAKING DAWN that finished the TWILIGHT saga off with a bang. But whether he’s dealing with undead glitter or oddball Coen-isms, Burwell’s music has never failed to be interesting, or stretch the limits in subtle ways. Like Fall On Your Sword’s groove score for the Wikileaks documentary WE STEAL SECRETS, Burwell derives real electricity from ESTATE‘s suspensefully groovy computer rhythms, going beyond just pouring on the beats to let us inside the coldly calculating, agent provocateur mind of Julian Assange. It’s an alternately hyper, and melancholy place to be as the music intrigues with the Wiki ringleader’s haunting, icy determination and gleeful sense of making a political difference. Yet within the score’s change-the-world enthusiasm, Burwell is very much at home with the cool, haunting melody that’s made his music especially distinctive to Coen Brothers fans. And with the moral of these movies usually being about how dreams of changing the world turn to shit with the given crusader’s hubris, Burwell gradually brings in creeper samples and a simmering orchestral voice, the music creating a paranoiac intensity. THE FIFTH ESTATE holds attention, and a musical determination that clearly shows its composer is doing a lot more than scratching a beat, reaching into psychology with a haunting effect that plays both the cold excitement of the internet, and the flawed people realizing the ultimate cost of good intentions in a planet that’s speeding from one message to the next.

With characters who’ve turned protest into its own form of hipness, THE FIFTH ESTATE offers the cool alt. grooves of Amon Tobin’s “Always,” Yppa’s “Never Mess With Sunday,” Tame Impala’s mildly rocking “Elephant” and Emika’s “Come Catch Me,” all songs which convey the cool, calculated groove that comes from being an truth-revealing Rockstar who’s all about public image.