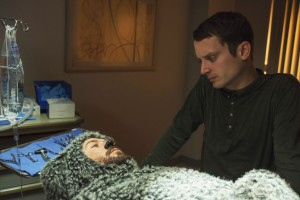 WILFRED is a series about Ryan (Elijah Wood), who sees his neighbor’s dog Wilfred (Jason Gann) as an Australian man in a dog suit. If you saw your neighbor’s dog as a man in a dog suit, you might wonder about your sanity, too, and that’s how we find Ryan at the beginning of “Uncertainty.” Ryan is particularly bothered by the fact that, at the end of Season 2, Wilfred found a drawing Ryan had made in childhood that contained Wilfred – even though the dog wouldn’t even be born for many years afterward.

Ryan has concluded that this means he’s crazy. He has imagined the drawing, just as he imagines Wilfred. Wilfred, on the other hand, thinks this means he’s a “magical being” who is immortal. He dismisses not remembering Ryan as a child as a dog’s usual bad memory. To prove he’s immortal, Wilfred drinks antifreeze – and has to be rushed to the vet.

Ryan is told the address in the microchip in Wilfred’s ear (a real-world technique for identifying pets so their owners can find them if they get lost) has a Sacramento address – Ryan is thrilled, as this will prove someone knew Wilfred as a puppy. Instead, he and Wilfred find a mansion, inhabited by snooty clone Stinky (also played by Gann), and Stinky’s human caretaker (Angela Kinsey). The caretaker explains that the dogs’ original owner was an extremely wealthy elderly woman. When her original pet – Wilfred – ran away, she had him cloned. The owner died and left everything to Stinky. The caretaker wasn’t around for either dog’s puppyhood.

Wilfred and Stinky first dislike each other, then bond. When Ryan leaves, he discovers that the two dogs have swapped places when Stinky (posing as Wilfred) suggests Ryan commit suicide – it’s not the suggestion but rather Stinky’s correct use of the word “dalliance” that gives him away. It turns out that Stinky pretended his life was great so he could escape the caretaker, who has been secretly “abusing” him – by taking pictures of him dressed up in funny costumes. Wilfred is overjoyed when Ryan comes back for him. Ryan does find a photo of Wilfred as a puppy with his canine mom (Ryan sees him as a boy in a puppy suit, with a real golden retriever as his mother), which proves Wilfred is a real dog.

Back in the basement, neither Wilfred nor Ryan is any the wiser about why Ryan, as a child, drew a picture of Wilfred before ever meeting the dog. Ryan burns the picture; Wilfred secretly buries a copy.

As WILFRED episodes go, “Uncertainty” is pretty benign, as our titular character doesn’t attempt to mess with Ryan in any way (well, except for getting him stuck with the massive vet bill that no doubt ensued from the antifreeze incident). Gann has a good time playing the pretentious, fairly mean-spirited Stinky and Kinsey fits into the swing of things as the caretaker.

There are nice little references to previous episodes, with Wilfred and Stinky binging on cocaine in a room full of stuffed-animal giraffes (Wilfred’s fantasy sex playmate of choice) and “said the man to the dog” quoted as a sign of Ryan’s unique mental state.

Since two seasons have gone by without a firm explanation of what Wilfred is, it was beyond unlikely that the mystery of the drawing was going to get explained here, but it’s teased out nicely in the episode.

One carp: not that one looks to the series for logic, but if Wilfred is micro-chipped, since we know he’s been to the vet many times already, why is it just coming up now? Especially given that Wilfred has a microchip, wouldn’t if have been much cheaper for his owner to hire a detective to find him, rather than having the dog cloned?

Ah, well, ours is not to reason why, ours is just to watch WILFRED and see what kind of strangeness comes next.