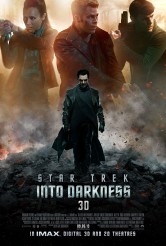 Entertainment, not a reincarnation

Giving any kind of plot summary of STAR TREK INTO DARKNESS runs more than the usual risk of spoilers. What can be said? Well, Captain Kirk (Chris Pine), Mr. Spock (Zachary Quinto) and the rest of the very dedicated crew of the Enterprise extricate themselves by the skin of their teeth out of one crisis only to be thrown into another – which is soon eclipsed by a third. All of this is in the first act.

In other words, director J.J. Abrams and the screenwriters here, Roberto Orci & Alex Kurtzman & Damon Lindelof leave no opportunity for a moral conundrum or mortal danger unexplored. There is a fair amount of humor, much of it thanks to having a character put into words what we’re thinking, and a lot of the kind of emotional drama that only works when viewers are invested in not just individual characters, but in how those characters interact with one another. Fortunately, for those audience members who have accepted the reboot, between longtime fondness for the characters and the worthy performances here, this will be a given for most.

Pine and Quinto unsurprisingly are the stars here. Pine doesn’t attempt to approximate William Shatner’s James T. Kirk demeanor, partly because it’s impossible to imagine anyone successfully doing it at all (at least, outside the realm of parody) and partly because it wouldn’t work in these more modern surroundings anyway. Instead, this Kirk is cocky and happy, but willing to learn and acknowledge when he’s wrong – this Kirk recognizing a mistake is more like spinning a sailboat around that rerouting an aircraft carrier. Quinto adroitly treads the fine line of making Spock fairly stoic for the most part, yet showing us when he’s irate, alarmed or anguished. When he stops being stoic, though, the filmmakers and Quinto make him arguably a little too human, especially in moments of anger.

The two other regulars here who most get the chance to shine are Zoe Saldana’s Lt. Uhura and Simon Pegg’s Mr. Scott. Uhura gets to put both her linguistic and butt-kicking skills to work, both of which Saldana does persuasively, and Pegg’s Scotty is endearing in both his energy and his principles.

As for Cumberbatch, pretty much everyone who has seen him in SHERLOCK is primed to believe this actor as someone who is brilliant and extremely physically capable.

The 3D here is usually lovely, especially when the Enterprise goes to warp speed and we go flying after it or ahead of it at what feel like genuinely great distances. We also get great depth of field in the meticulously constructed sets. The only time the process is distracting is in dialogue scenes, where we’re looking at one person’s face over another person’s shoulder – the full-face close-ups are beautiful, but the faces shown in profile in the foreground become strange wall-like surfaces sitting at the edge of the screen.

STAR TREK INTO DARKNESS is probably going to be most enjoyable to people who are not STAR TREK: THE ORIGINAL SERIES purists. However, one doesn’t have to be dedicated to every detail of the original incarnation to be stunned by the occasional display of narrative chutzpah here. The new film succeeds best when it’s coming up with entirely new storylines and tactical twists. When it gets into “homage” territory, there are times when it’s intentionally funny, times when it seems like a respectful nod to what’s come before and times when you are likely to say to yourself, “Oh, no, they did not just do that.” At these moments, it seems like STAR TREK INTO DARKNESS is addressing itself to those viewers who are genuinely unfamiliar with the older TREK tales, but in that case, why all the nods to what came before? (There is at least one point in the film where we are all but instructed to re-watch the relevant material.) There are a number of recycled elements that don’t serve either new viewers (who won’t get the references) or old fans (who will see these elements as so altered that they might as well be called something else).

STAR TREK INTO DARKNESS does take pointed aim at some of the precepts of the original version (the filmmakers make a reasonable case against the Prime Directive in the first ten minutes). However, the film also maintains a running discussion, in both words and deeds, about personal responsibility, violence, and the evils of rushing to judgment in either direction, which is very in keeping with TREK’s grounding principles. This is not a resurrection or reincarnation of STAR TREK: THE ORIGINAL SERIES, but it holds together pretty well as entertainment with some good philosophical notions on its mind and some worthy relationships at its heart.