place beyond the pines soundtrack review 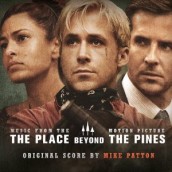 ©2013 Milan Records
THE PLACE BEYOND THE PINES soundtrack
Reviews

CD Review: THE PLACE BEYOND THE PINES

Indy movies, and their scores can smack you upside the head with their high-minded pretentiousness, especially when attempting to grasp the epic with music that screams attention as to how outside the box it is. Yet what often provides pitfalls for those movies proves to be terrific assets in the cases of THE PLACE BEYOND THE PINES, a decades-spanning American crime saga graced by an impressively big, WTF score by Mike Patton. Here the former Faith No More singer makes an auspicious jump in quality from the mindlessly fun electro-carnage of CRANK: HIGH VOLTAGE using a voice that’s just as brazen in its way to take a perceptive look at the sins of criminality, and well-intentioned white lies that can spell disaster.

Writer-director Derek Clanfrance (BLUE VALENTINE) has created vividly entangled characters, most of whom seek redemption in screwed-up ways that will end in no good, no matter how long their destinies take to play out. Consequently, Patton fills even seemingly inconsequential scenes with weirdly modulating sampled strings and religious choruses, with grinding guitars and dulcimers getting across low class backwoods behavior- even if the movie’s setting is upstate New York.

Cricket chirps, ominous percussion, feedback, yowling synths and host of other brooding electronic melodies don’t so much suggest trouble brewing among bikers-gone-bad and corrupt cops as much as they impress as the long lost score from the HALLOWEEN 3 – had that movie always been intended for Michael Meyers. When many scores do a good job of giving you exactly what you expect for background energy, Patton’s “Pines” has a true sense of audacious surprise, especially when voices jam with sizzling electronics. Much like star Ryan Gosling’s ever-growing parade of sociopaths, Patton has a punk sensibility that really doesn’t seem to care what it’s riding over, or even about what his music’s supposed to make you think. It’s an attitude that makes for an amazingly fresh soundtrack that manages to pull new daredevil tricks from alt. scoring, creating a clash between the angels in its main character’s hearts, and the twisted, self-destructive actions that end up coming out instead.

For as brash as it is, Patton’s score casts a seamless spell with PINES‘ melancholy song choices, whether it’s the praying Latin voices of “Miserere Mei,” the childlike female vocalese of Ennio Morricone’s “Ninna Nanna Per Adulteri” or the gentle, soulful folk strumming of Bon Iver’s “The Wolves.” And when it comes to darkly soothing string instrumentals, Arvo Part’s “Fratres for Strings and Percussion” continues to be the beautifully ominous modern classical standard that keeps on giving, its ever-anguishing stings helping these PINES, achieve an mighty sense of the tragic from its small-scale setting, a place where musical emotion proves to be boundless, and captivatingly strange in Patton’s hands.

Related:Movie Review: THE PLACE BEYOND THE PINES