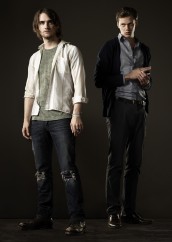 HEMLOCK GROVE is the new series made expressly for Netflix, which means all thirteen episodes have been immediately available since the show’s April 19 debut. Based on a novel by series creator/co-show runner Brian McGreevy, HEMLOCK GROVE is the story of a titular small town, where there are sinister doings at the local biotech firm.

Landon Liboiron plays newcomer to town Peter Rumancek, who has a distinctly wolfy side; Bill Skarsgard portrays Roman Godfrey, scion of Hemlock Grove’s wealthiest family who has a dark side of his own.

In reality, Skarsgard comes from one of Sweden’s foremost acting families – his father is Stellan Skarsgard and TRUE BLOOD’s Alexander Skarsgard is one of his brothers (other siblings are also actors). His feature credits include the recent Tom Stoppard adaptation of ANNA KARENINA, directed by Joe Wright, as well as a number of European films and television.

Liboiron, a native of Alberta, Canada, actually has more werewolves in his past, with THE HOWLING: REBORN among his feature credits. He was also a regular on TERRA NOVA and DEGRASSI: THE NEXT GENERATION.

After a panel for HEMLOCK GROVE at the Television Critics Association press tour, both actors sit down for a chat about acting in a series that deals in darkness without and within.

ASSIGNMENT X: What can you say about your characters?

BILL SKARSGARD: I’m playing Roman Godfrey, who is the young heir of the Godfrey Institute, which is this really successful biotechnology company. The family made a lot of money through the steel companies, and then they went for the biotech as the steel industry was diminishing. He’s kind of the prince of this small town. He has all the money, he’s well-dressed, very cocky, gets what he wants, has that kind of arrogance to him. But when you get to know him more and more, he’s a very sad character, a very sad person, going through a lot of depressing things in his life, and he’s dealing with that, and he has a huge, growing darkness inside him, an evil, if you will, that he’s constantly fighting, because he doesn’t want to be bad, but he has these urges of being bad. So he’s a very interesting character to play.

LANDON LIBOIRON: I play Peter Rumancek. He’s sort of a gypsy traveler, a wayfaring stranger. I think on the show, him and the Shelley character (Nicole Boivin as a child, Niamh Wilson as a young woman) both hold the most morally grounded characteristics. His biggest fear in life is simply being caught and being put in a cage. So he really appears as a character who lives moment to moment, day to day, but when he comes to Hemlock Grove, he meets Roman, and for the first time, he finds someone that he has a mutual connection with, whether it’s spiritual or just he finds a friend in Roman, that he’s never had before. So he’s now conflicted with his lifestyle, going from place to place, [as opposed to] having this relationship with Roman. And then one of the local girls in the town ofHemlock Grove is brutally murdered, and there’s a rumor going around that Peter’s the one who did it. So he feels this obligation to stay and make sure this rumor doesn’t chase him for the rest of his life and that he avoids being put in a cage. And this adventure between the two of them kind of ensues afterwards.

AX: So both your characters are trying to clear Peter’s name?

LIBOIRON: We both have our motives as to why we want to capture the thing that’s murdering the local girls.

SKARSGARD: Yeah. And I think for Roman, it’s like I said, he has this darkness inside him. I think he has a part of him that maybe he doesn’t realize, that subconsciously he’s drawn to this murder thing. It’s maybe even instinctual – he wants to get close to that, but also he wants to be good and do good for himself, and if you have this inner conflict, it’s very easy to solve it if you put it into physical form – solving a murder is very good [as a distraction from the inner conflict]. So he [thinks], “If I do something really good, like if I help people, people are dying, that’s bad, I need to save these people,” that’s kind of a way of him battling the darkness and the thing that he fights inside him. I think that’s why it’s so extremely important for Roman to solve this. And this becomes his life quest, because it’s his own way of saving himself.

LIBOIRON: I think maybe even subconsciously. Very early on, we were constantly asking Brian McGreevy questions about the two characters and I think he summed it up very well between the two. He explained it in that Roman Godfrey so desperately wants to be strong and brave, and Peter’s almost exhausted from being the strong and brave one, so they balance each other’s exhaustion out, and they help each other out through their inner strife.

AX: They each sort of make it okay for the other to be who he is by essentially saying, “Gee, I’d like to be like you”?

LIBOIRON: Yeah, exactly. Like Peter helps Roman feel there’s good in him, and Roman helps Peter simply to be not alone [laughs].

SKARSGARD: But it’s also a really weird relationship. It’s really interesting, their chemistry. They’re best friends – they become friends and they never had anyone to talk to in this way, ever. They were loners, because they’re so different from everyone else, and now they’ve found someone in school that’s different, maybe not in the same way, but definitely different from everyone else. So they kind of find each other and need each other’s company in a way. It’s pretty sad and throughout the show, it’s kind of going back and forth with that relationship. [laughs] It’s a complicated relationship.

AX: Eli Roth directed the first episode of HEMLOCK GROVE. Is there anything distinctive about him as a director?

LIBOIRON: Yeah. He’s really cool – he has a lot of charisma.

SKARSGARD: Oh, for sure, yeah. And he’s really good – I remember me coming in, this is the first thing I did here in North America and I was a bit nervous about it. He was really cool about it. We rehearsed and we talked a lot and he was very supportive and as soon as we got into it, we got into the pace and everything was all right, but he was talking to us actors in a really nice way. He’s a big name and it’s really cool how a guy like that was being really supportive.

LIBOIRON: Yeah, he just made us feel included.

AX: How do you think audiences will react to HEMLOCK GROVE?

LIBOIRON: I would go out on a limb and guess that it’s not going to be what you expect it to be. I think it has a lot of heart in it, a lot of twists and turns, a lot of really interesting characters that are all deserving of being watched. Brian [McGreevy] has a lot to say through these characters.

SKARGARD: Yeah, I think you put it really well. It’s very unexpected. People are going to have all these ideas about the show, like it’s going to be a grungier type of TWILIGHT. They have no idea. You have to see this show. Everyone’s going to be surprised.