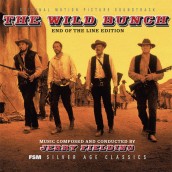 Collector labels had been around long before Film Score Monthly magazine launched their soundtrack offshoot with THE TAKING OF PELHAM ONE TWO THREE back in 1996. Founder Lukas Kendall’s fastidious attention to detail and shrewd mix of popular and obscure titles from the golden and silver ages of film music ensured FSM’s longevity over the course of 249 titles and nearly two decades, Now as if he were the grizzled leader of a bunch of ragtag outlaws, Kendall has chosen to take out FSM on his own terms in a big, gloriously bloody bang for number 250. Given Kendall’s biting sense of satire, it’s no wonder that the label has met its glorious demise with the ironically chosen THE WILD BUNCH, a film that firmly put the clean killing morality old Hollywood in its grave.

Its director was a boozing hell-raiser while his muse had been blacklisted for his unapologetic political beliefs. So it’s almost funny to think that one of the great teams of 70s cinematic rebellion began with a gentle TV production of NOON WINE. However, Sam Peckinpah and Jerry Fielding would next blow any pleasantries out of the water with 1969s THE WILD BUNCH. Peckinpah’s ode to the end of west reveled in bad behavior, all while making audiences root for its SOB anti-heroes, even as high-minded critics were reviled by the still-shocking gunplay. Though  THE WILD BUNCH ripped away the western mythos, Peckinpah and Fielding’s work was no less manly, or romantic for it. Sure this didn’t have the ripping BIG COUNTRY orchestrations of Jerome Moross, or the brightly adventurous sound that Elmer Bernstein provided in any number of pictures for The Duke. But if anything, Fielding’s Oscar-nominated score was more stripped down and gritty for its raw approach, marching its characters in military lock step to the accompaniment of ominous, nearly dissonant orchestrations. Given a Mexican revolutionary to serve, and ultimately rebel against, Latin rhythms proved to be another major member of  THE WILD BUNCH, guitar and flute speaking for the vulnerability, and deep, deep down inner goodness these hard men don’t dare show. Fielding’s music is about the act of myth building, leading to the kind of heroic gesture that legends and film history are made of- even if Fielding occasionally breaks a smile with playful accordions. There’s also a terrific tip of the hat to more traditional western adventure in his terrifically energetic chase music, galloping along with a brassy, rip-roaring theme that any hard-ass would be proud to evade a posse with.

The start of his tormented relationship with Peckinpah would yield increasingly darker fruit with the likes of STRAW DOGS, BRING ME THE HEAD OF ALFREDO GARCIA and his unused GETAWAY, not to mention the composer’s increasing plunge into the heart of dissonant darkness with such twisted opuses as THE MECHANIC and THE NIGHTCOMERS, making THE WILD BUNCH‘s more rousing moments into Fielding’s last huge melodic gasps for Peckinpah, as it were. There’s even more fatalistic lyricism than ever before over the course of the film’s complete 74-minute score, nearly an hour of alternate cues, its original album presentation and a plethora of Mexican source music. Writing the legend are Lukas Kendall and John Takis, whose excellent liner notes (and even more online) about Fielding and Penkinpah’s explosive relationship are complemented by a picture-filled booklet. This WILD BUNCH is truly the last word, and FSM musical note in detailing this seismic shift in filmmaking and scoring. It’s exactly the kind of big, final bang that you’d expect FSM to take itself out with- not that their heroic act is any less mournful an occasion for soundtrack fans.